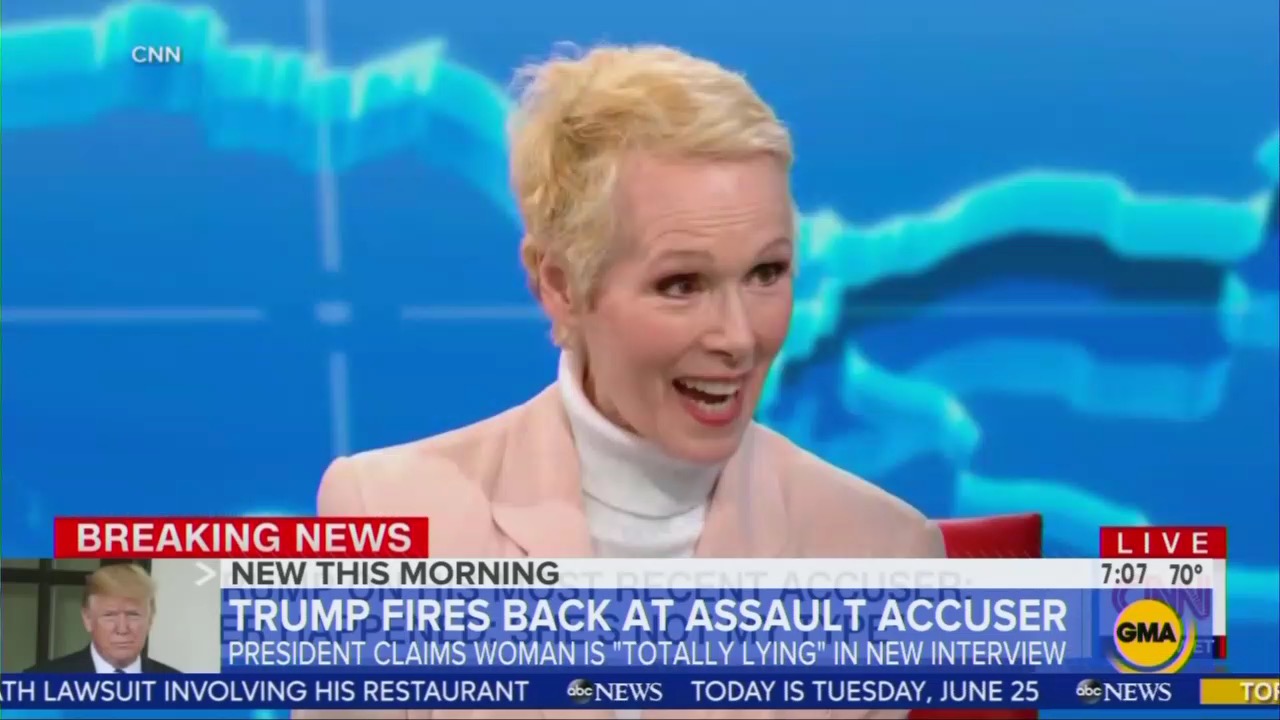 All three networks Tuesday morning covered the sexual assault allegations by Elle magazine columnist E. Jean Carroll against President Trump, with NBC being the only network of the three to just do a brief on the story. However, the networks  omitted the accuser’s very odd behavior and comments during an interview on CNN last night with Anderson Cooper, despite ABC and CBS showing other clips from that interview.

ABC gave a full-fledged report on the accusation. On Good Morning America, anchor Cecilia Vega described Trump’s response to Carroll’s allegation, with a disgusted look on her face: “Overnight the president denied the allegations saying, quote, she's not my type.” Correspondent Tom Llamas picked up the story, saying that this alleged incident has “haunted” her for over two decades. He touted the columnist “firing back” at Trump for saying she wasn’t his type, in an interview with CNN’s Anderson Cooper Monday night.

LLAMAS: The president telling The Hill, quote, ‘I'll say it with great respect, number one, she's not my type. Number two, it never happened. It never happened, okay?’ Carroll firing back on CNN.

CARROLL: I love that. I am so glad I am not his type.

Llamas framed Carroll’s accusation as legitimate because other women had also accused him of assault:

LLAMAS: Trump has faced more than a dozen accusations of sexual misconduct or sexual assault all of which he has denied. Carroll says the president's response to her allegation is similar to that of other accusers.

CARROLL: He denies, he turns it around, he threatens and he attacks.

Llamas continued with the one-sided reporting, pointing out past comments Trump had made about an accuser’s appearance. Despite including these two short statements from Carroll’s interview last night, the ABC report purposefully excluded the awkward and eye-brow raising comments Carroll made that call into question the legitimacy of her claim, including telling Cooper that most people think rape is “sexy.”

On CBS This Morning, correspondent Jericka Duncan also touted Trump’s “not my type” response in a short report. CBS played one clip of Carroll describing what happened on CNN, but also failed to include her more shocking comments. Afterwards, anchor Gayle King slammed Trump for “insulting” Carroll in his response. NBC’s Today did a brief on the story with no clips from the CNN interview.