CBS Cheers Badgering of Barr: ‘Amy Klobuchar Gets an A-Plus!’

The journalists on CBS This Morning, Thursday, were excited by the Democratic grilling of Attorney General William Barr. After speculating about whether Barr would be held in contempt of Congress, analyst Rikki Klieman praised Klobuchar’s attacks on the AG as very effective: “I thought Amy Klobuchar gets an A-plus because she had a goal in her questions and she got to it.”

(Klobuchar is a CBS favorite for parroting the liberal line.) She continued, “She talked about lingering, pardons, putting them out there, acts of obstruction an why doesn’t the totality bring us to a different conclusion?” Co-host Gayle King, a Democratic donor, offered Democratic talking points: “We’re still not getting all the answers.”

Co-host Norah O’Donnell speculated on the possibility of holding Barr in contempt: “First, Congress, if they hold the attorney general in contempt of Congress, what would that look like?”

NORAH O’DONNELL: CBS News legal analyst Rikki Klieman is with us and she watched the entire Barr hearing in its entirety yesterday. And as you heard, she's got it. [Laughs.] So much to get through. And nobody's better at that than you. First, Congress, if they hold the attorney general in contempt of Congress, what would that look like? 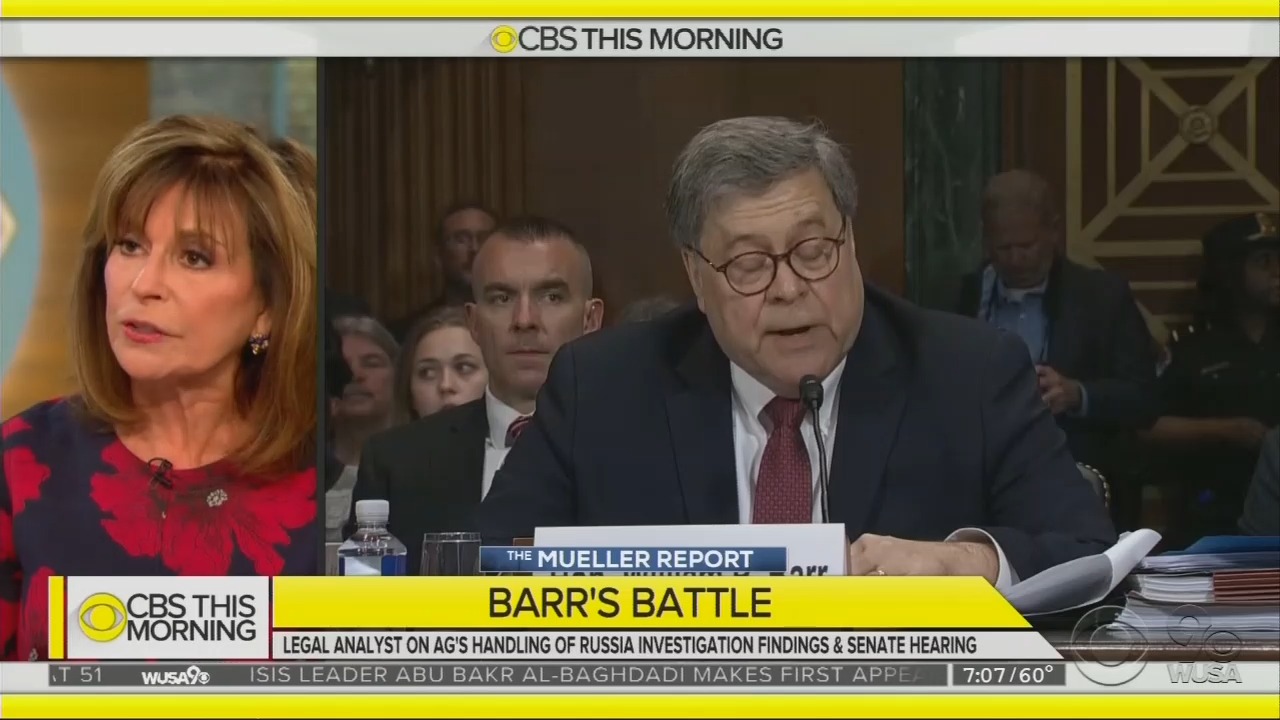 RIKKI KLIEMAN: Well, what has to happen in order to hold anyone in contempt of Congress is you subpoena that person. That person refuses. Then, at that point, you have to have a vote in Congress in order to hold them in contempt. Then, at that point, if it is still refused, how do you enforce it? So, you can have a fine, of course. But you would have to go to court in order to get an order to literally arrest someone and bring them in. We're really in uncharted territory.

KLIEMAN: He's supposed to be totally independent and impartial. You have to remember that the Department of Justice, though it’s supposed to be part of the executive branch, it is supposed to be the arbiter of fairness. What we heard a great deal of, not only yesterday, but in his statements and written statements before is he worked as an apologist for the President about the president's frustration and his feeling about an inability to govern as a result of being quote, unquote, “falsely accused.” What William Barr winds up saying during the course of testimony is that any president, not just this president, if he or she believes they are being falsely accused, they have the right to get rid of that accuser. That is a very dangerous precedent indeed.

GAYLE KING: Did Barr's testimony yesterday really make the case more than ever that we need to hear from Robert Mueller?

KLIEMAN: There is no doubt that if we didn't think we needed to hear from Robert Mueller before yesterday, by  the end of yesterday, we certainly know we do and for good reason. William Barr is abundantly clear, which I think is very disturbing, that he and Rod Rosenstein came to a conclusion of approximately ten episodes of on obstruction of justice or potential obstruction of justice using a standard in a criminal case of proof beyond a reasonable doubt. He says in his testimony that he doesn't know why Robert Mueller came to a conclusion, which I call it a conclusion of equal poise. There is evidence about obstruction but yet there isn't evidence about obstruction enough to convict in a criminal case. So who has the primary evidence? Robert Mueller.

JOHN DICKERSON: But he left it in Barr's lap, and so Barr, having had it left in his lap made the call.

KLIEMAN: Well, it certainly could be said that Robert Mueller intended, perhaps, to leave it in Congress's lap. Don't you think that Congress has the right to ask that question?

DICKERSON: Well, it asks it of itself. The special counsel has handed it all off. Why does he have to?

KLIEMAN: Because we don't know and Congress doesn't know when he looked at approximately ten episodes with some episodes beneath them, Don McGahn as the legal counsel below the President being the most egregious we can lay our hands on and figure out why he came to that conclusion.

O’DONNELL: And then this quickly, Senator Klobuchar in her testimony, tried to make the case that what she learned in law school that was that you look at the totality of the evidence and the pattern here. Doesn’t that matter with those ten instances of potential obstruction of justice?

KLIEMAN: I thought Amy Klobuchar gets an A-plus because she had a goal in her questions and she got to it. She talked about lingering, pardons, putting them out there, acts of obstruction an why doesn’t the totality bring us to a different conclusion?

KING: It’s the more we hear, the more questions we have. We’re still not getting all the answers.