Of Course: With Manafort News Breaking, CBS Turns to Dem Senator for Reaction

With the breaking news that ex-Donald Trump campaign manager Paul Manafort has been charged with tax fraud, who would be the ideal person to talk about it? According to CBS This Morning on Monday, it’s the liberal, partisan Democrat Amy Klobuchar. Co-host Norah O’Donnell eagerly wondered, “So, the question has always been about collusion and the Trump campaign which remains the open question, right?”

Co-host Charlie Rose prompted Klobuchar: “You’re a former prosecutor. You know how grand juries operate. Tell me where we are in this investigation with what’s happening this day?”

While much of the morning followed the breaking news of the story — exactly what news reporters should do — it’s typical of liberal journalists to jump to a Democrat to discuss the latest problems for a Republican.

And of course, no mention during the interview was made of the Clinton dossier and whether that was a potential problem for Hillary Clinton and Democrats. 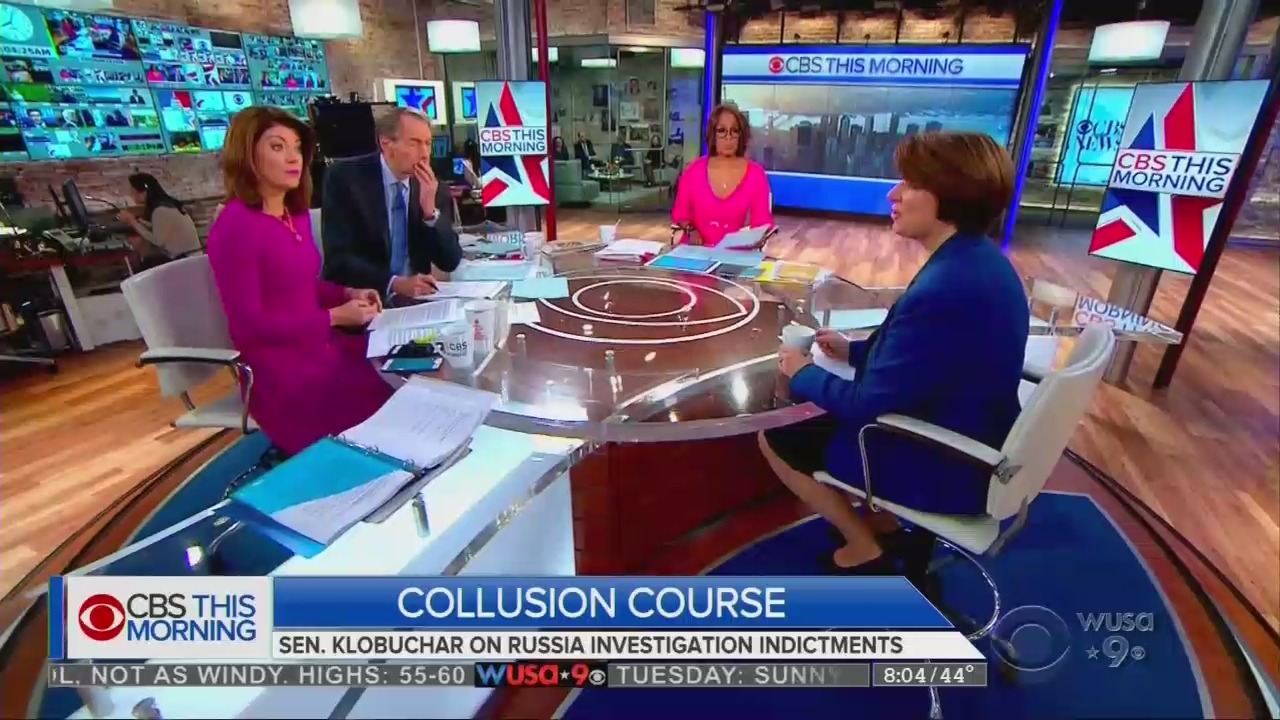 NORAH O’DONNELL: Minnesota Democrat Amy Klobuchar is a member of the Senate Judiciary Committee, one of the three congressional committees investigating Russian influence in the last election. Top lawyers from Facebook, Twitter and Google will appear before the House and Senate Intelligence Committee on Wednesday. Last month, Facebook turned over more than 3,000 ads it says were brought by a Russian troll farm and seen by about ten million users. Senator Klobuchar cosponsored the bipartisan Honest Ads Act that would require social media platforms to reveal who buys those political ads. She's with us only on CBS this Morning. Senator, good morning.

O’DONNELL: Let's start with the breaking news this morning. It appears that Paul Manafort,  Trump's former campaign manager is turning himself in to the special counsel. What do you think this means for the Russia investigation?

KLOBUCHAR: Well, first of all we'll wait until these charges are filed. But we know Manafort had the top position in the campaign. He was the chairman. We also know he left that position in part because of his dealings with foreign governments

CHARLIE ROSE: You’re a former prosecutor. You know how grand juries operate. Tell me where we are in this investigation with what’s happening this day?

KLOBUCHAR: You know, I don't think people know exactly where they are, which is appropriate, because Bob Mueller has been conducting this investigation professionally.

GAYLE KING: The President calls this a whole which hunt. Any questions to the timing? Does the timing bother you as they're getting ready to concentrate on tax reform?

KLOBUCHAR: No. And I consider it a true hunt, not a witch hunt. I think we owe it to our democracy.

O’DONNELL: So, the question has always been about collusion and the Trump campaign which remains the open question, right?