CBS used Earth Day 2019 to hype higher taxes as a way of fighting global warming. The entire second hour of This Morning was devoted to climate change and the environment. On the same show, current co-host Gayle King proudly played archival footage of Walter Cronkite in 1970 promoting Earth Day alarmism: “A day set aside for a nationwide outpouring of mankind seeking its own survival.”

Good to know that the hyperbolic language hasn’t changed. King played another clip of Cronkite from April 22, 1970: “The gravity of the message of Earth Day still came through. Act or die.”

Of course, there was no mention of how wrong many of the predictions were (and continue to be). The Daily Signal on Monday remembered:

“By the year 2000, if present trends continue, we will be using up crude oil at such a rate … that there won’t be any more crude oil,” ecologist Kenneth Watt warned around the time of the first Earth Day event. “You’ll drive up to the pump and say, ‘Fill ‘er up, buddy,’ and he’ll say, ‘I am very sorry, there isn’t any.'” Watt also warned of global cooling and nitrogen buildup rendering all of the planet’s land unusable.

AEI offered up this spectacularly wrong media prediction from 1970.

In January 1970, Life reported, “Scientists have solid experimental and theoretical evidence to support…the following predictions: In a decade, urban dwellers will have to wear gas masks to survive air pollution…by 1985 air pollution will have reduced the amount of sunlight reaching earth by one half….”

Approach central London and you'll see these signs announcing a charge just for bringing your car into town. Ka-ching About 15 bucks. And if you've got an older car, especially if it's a diesel, the overhead cameras will spot you, and under the new, ultra low emissions zone, that will be another sixteen and a half bucks. That’s over $30 just to drive into town.

No mention at all of the negative economic impact this places on British citizens. The message? Just deal with it: “And if London was any example, the way we move around and the way we live our lives will change too.”

After the segment, King treated the tax as everyone doing “a little something.”

GAYLE KING: So if you have to pay more if your car is putting out pollution, do you think you’ll get another car?

NORAH O’DONNELL: Yes, I would.

DICKERSON: Or take the bus.

KING: [Laughs] Or take the bus.

It’s hard to believe that King (net worth $20 million) and Dickerson (net worth $ 4 million) will be taking the bus anytime soon. 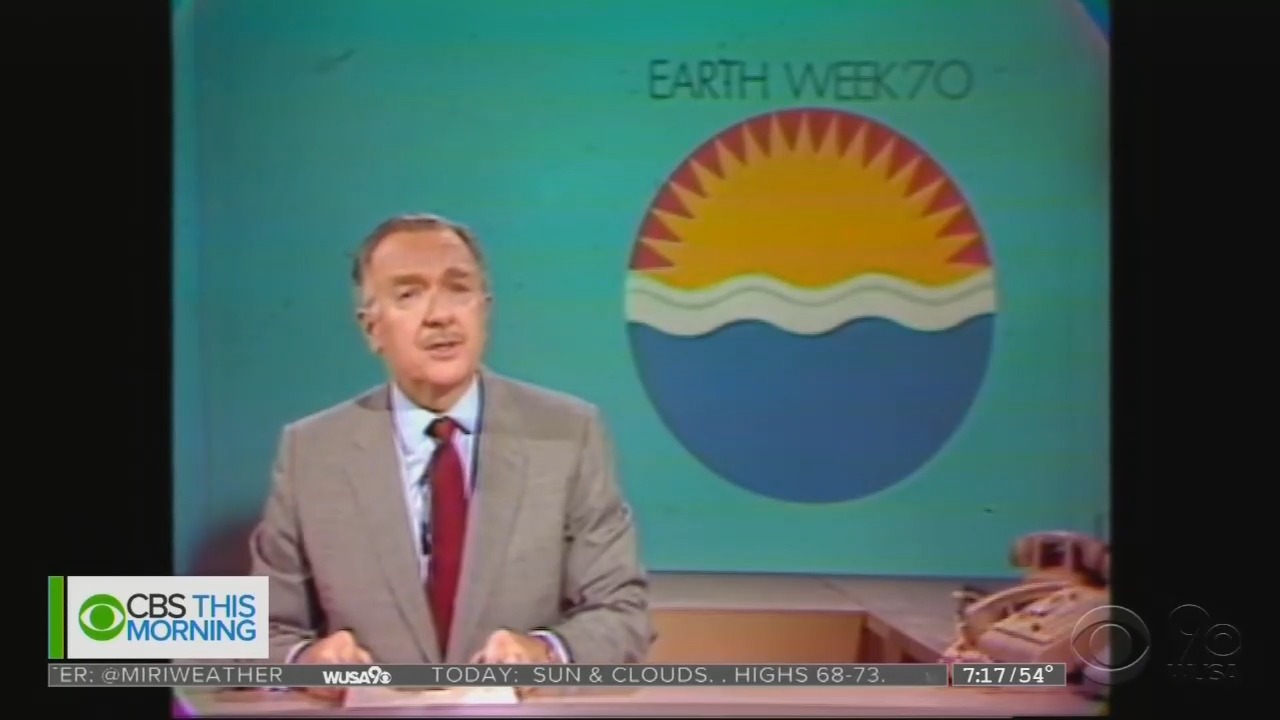 GAYLE KING: A new poll shows half the Americans think the environmental will be worse for the next generation. It also found that 59 percent of Americans believe humanity can do something to stop climate change. And that is why we are continuing the tradition started by Walter Cronkite 49 years ago to mark Earth Day. In a special broadcast this morning, we will take you to every continent to look at modern challenges and unique solutions from high emissions in London to air pollution in India to water concerns in New Mexico and Australia and deforestation problems in the Amazon. It’s all part of our special Earth Matters broadcast this Morning.

WALTER CRONKITE: A day set aside for a nationwide outpouring of mankind seeking its own survival. Earth Day.

KING: On April 22, 1970, CBS News marked the first ever Earth Day with a special anchored by Walter Cronkite.

CRONKITE: The gravity of the message of Earth Day still came through. Act or die.

NORAH O’DONNELL: We're devoting the rest of the broadcast to our Earth matters coverage. as carbon dioxide levels continue to rise every year, big cities are looking for ways to go green. This month, London introduced its first ultra low emission zone to fight the cities toxic levels of air pollution.. It's one the most radical anti-pollution policies on the planet.  Mark Phillips takes us for a ride in London to show us how the polluters pay. 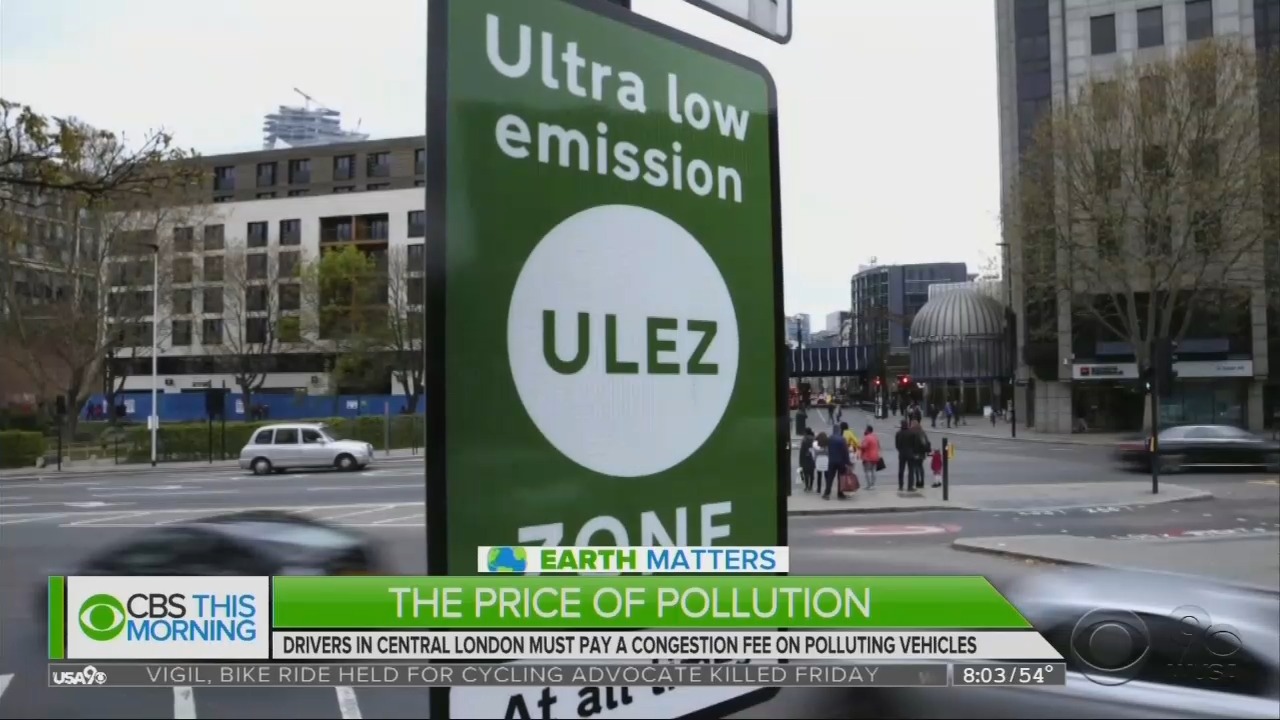 MARK PHILLIPS: You don't have to go somewhere exotic to run into the effects of climate change these days. A drive around central London will do it. And because of environmental concerns, that drive has gotten a lot more expensive for some lately. Approach central London and you'll see these signs announcing a charge just for bringing your car into town. Ka-ching About 15 bucks. And if you've got an older car, especially if it's a diesel, the overhead cameras will spot you, and under the new, ultra low emissions zone, that will be another sixteen and a half bucks. That’s over $30 just to drive into town. Why? Just ask the mayor.

SADIQ KHAN (Mayor of London): If you're going to drive a more polluting vehicle, you have to pay for that.

PHILLIPS: The point of Mayor Sadiq Khan’s charges is to reduce pollution by reducing the number of vehicles which produce it.

RICHARD BETTS: So this is the iconic graph of atmospheric co2 concentration

PHILLIPS: At the British Met office, the country’s weather forecasting service, they track the rise of carbon dioxide, the most prevalent greenhouse gas, much of it coming from the Mauana Loa observatory in Hawaii, which has been measuring CO2 since 1958. Scientists like Richard Betts count the gas in part per million of the air around us.

RICHARD BETTS: It was almost down at 300 at the beginning. Way past 400. So we’re at a 30 percent increase in CO2 over that half century or more.

PHILLIPS: And why is that significant?

BETTS: It's significant because it's causing the world to warm.

PHILLIPS: In just that period, average global temperatures have risen about one degree Fahrenheit – a rise scientists connect to more severe weather, increased flooding and drought.
There are still skeptics out there, somehow, who either doubt the source of the extra CO2 in the atmosphere and where it's coming from,

BETTS: "Even the skeptics that are disputing that it is a problem will accept that the science is sound and the warming is caused by increased greenhouse gases.

PHILLIPS: Over the past few years we've been going to some of the Earth's extreme environments where the signs of climate change tend to show up first. We found theat carbon that's been frozen in the arctic permafrost is being released as it thaws. We've found Antarctic islands where penguin colonies used to thrive that are now almost empty because the sea ice is gone. We've seen the coral bleaching due to warming on Australia's Great Barrier Reef. They used to simply produce daily weather forecasts in the future. Now it can also look further into the future.

BETTS: So we can't predict individual weather days more than a few days ahead. But we can make predictions of the annual average temperature and the seasonal temperature and rainfall. And we are predicting a warmer world, changing rainfall patterns and rising sea levels

PHILLIPS: The trend is up.

PHILLIPS: And if London is any example, the way we move around and the way we live our lives will change too.

KING: So if you have to pay more if your car is putting out pollution, do you think you’ll get another car?

NORAH O’DONNELL: Yes, I would.

JOHN DICKERSON: Or take the bus.

KING: [Laughs] Or take the bus.