CBS Gush: Beto O’Rourke Near the ‘Center,’ Off to a ‘Glowing Start’

The journalists at CBS This Morning on Thursday joined the collective media gush over Beto O’Rourke’s announcement that he is running for president, falsely spinning the far-left Democrat as part of the “center.” Co-host John Dickerson fawned over the Democrat who is off to a  “glowing start.” Reporter Ed O'Keefe even showed pictures of a dental visit O’Rourke put on social media.

But the most egregious moment on Thursday came when co-host Bianna Golodryga inaccurately claimed, “It is worth noting that his voting record has skewed more to the center than progressive.” That’s just wrong. O’Rourke has an F grade from the NRA. National Right to Life scored him at 0 percent on abortion. In contrast, NARAL Pro-Choice America awarded him a perfect 100 percent. O’Rourke has also floated the idea of eliminating Immigration and Customs Enforcement (ICE).

Not to belabor the point, but O’Rourke’s lifetime American Conservative Union score in Congress is an 8. He's no moderate. Co-host Gayle King, a Democratic donor, announced that she will interview Beto O’Rourke for Friday’s show: 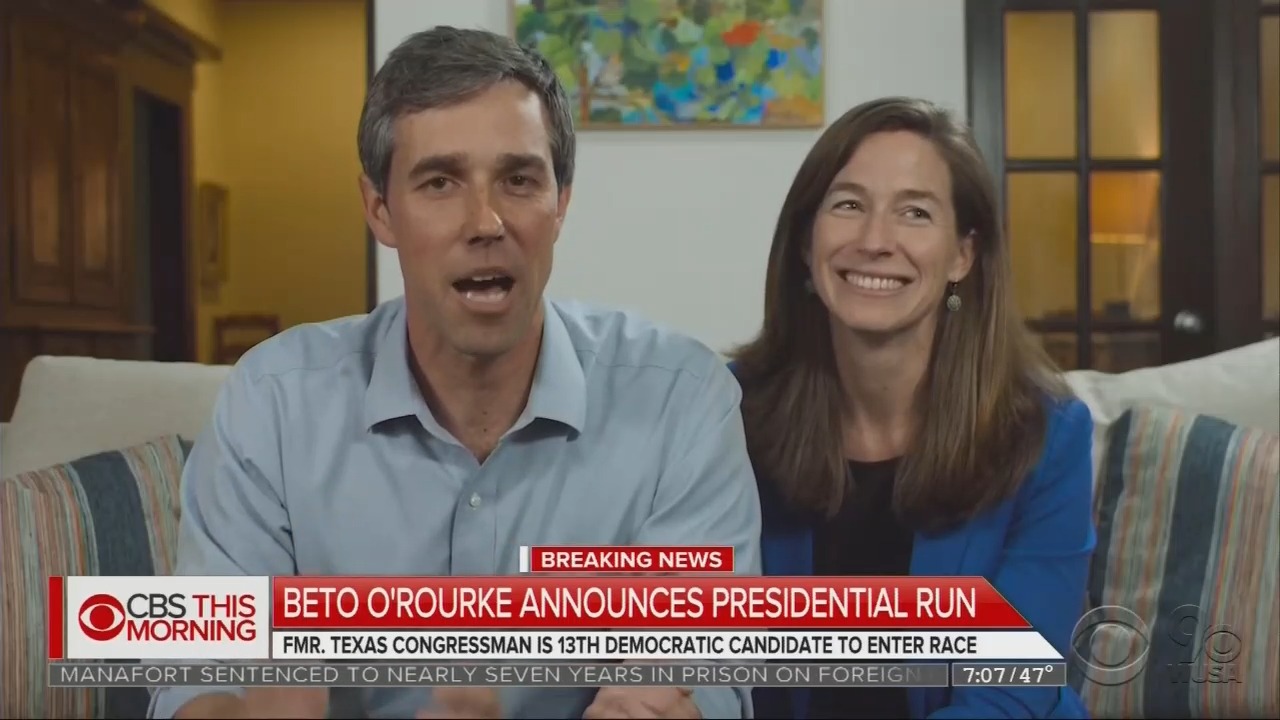 As soon as this show is off, getting on a plane, heading to Cedar Rapids, Iowa.... We're going to sit down with Beto O'Rourke later in Iowa for his only national TV interview about his decision to run for president and you can see that tomorrow.

Here is a list of King's Democratic campaign donations.

O’Keefe touted O’Rourke's live streaming of a dentist visit: “He did it in part by putting virtually every moment of his campaign on social media. Since the campaign, he's even taken followers to the dentist. It was quite a reveal.”

GAYLE KING: We have breaking news in the 2020 presidential race where a fast-rising Democrat says he is running. Former Texas Congressman Beto O'Rourke and his wife sent this message to supporters this morning --

BETO O’ROURKE: Amy and I are happy to share that I'm running to serve you as the next president of the United States of America. This is a defining moment of truth for this country and for every single one of us.

KING: O'Rourke is the 13th Democratic candidate. He is launching his campaign with a three-day tour of Iowa, the first state to vote in next year's campaign for the nomination. Ed O'Keefe is at the site of O'rourke's first scheduled rally in Keokuk, Iowa and has more. Ed, good morning to you. 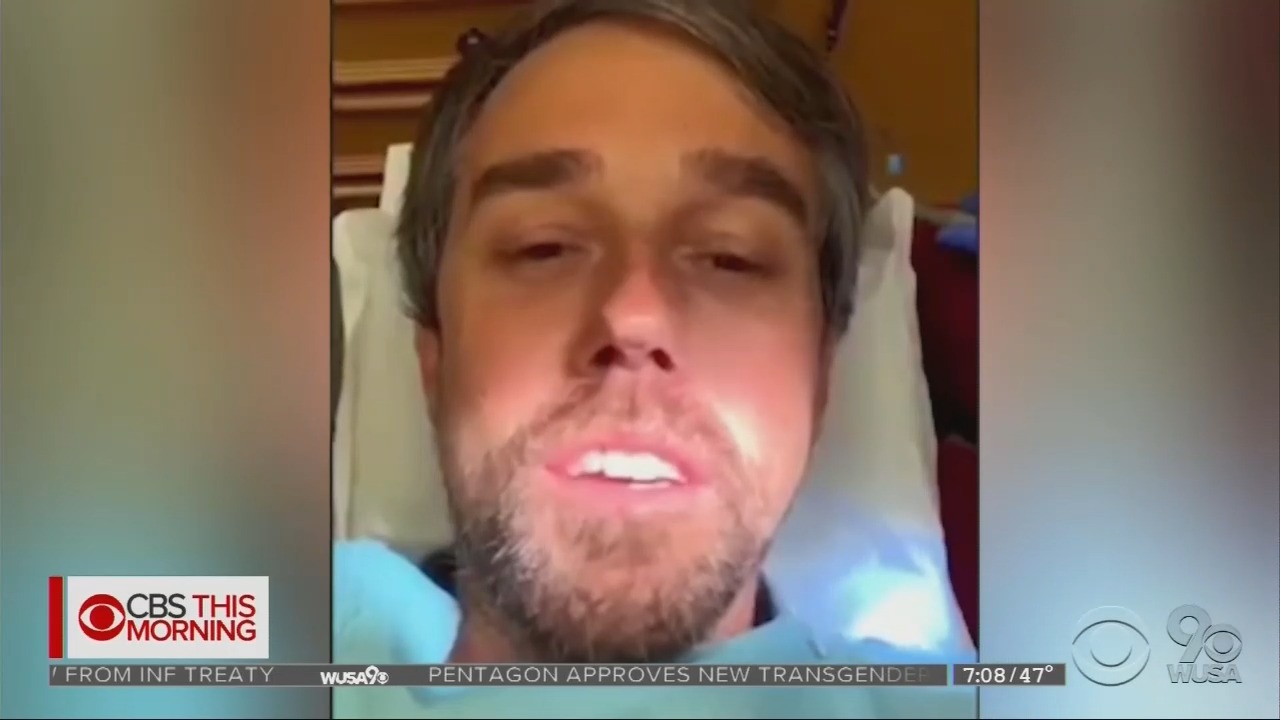 ED O’KEEFE: Good morning, Gayle We're here at the Lost Canvas, a coffee shop and art gallery where the campaign kicks today. O'Rourke is a former three term congressman who lost a U.S. Senate race in Texas last year. So, you might wonder why we find this so interesting? When you talk to voters, activists, and the rival Democratic campaigns across the country, the one name that always comes up is Beto O'Rourke. They see him as the most unpredictable potential candidate in this race and somebody they know can raise big money.

Here in Iowa, a poll over the weekend put O'Rourke in fifth place behind former vice president Joe Biden who's expected to join the race next month, and Senators Bernie Sanders, Elizabeth Warren, and Kamala Harris. O'Rourke's three-point loss to Senator Ted Cruz last November was the closest margin for a U.S. Senate race in Texas since 1978. Despite the defeat, O’Rourke raised more than $80 million for his Senate campaign, a record sum for a contest. He did it in part by putting virtually every moment of his campaign on social media. Since the campaign, he's even taken followers to the dentist. It was quite a reveal. So, we'll see here today in this southeastern corner of Iowa whether what O'Rourke was able to do by capturing the imaginations of Texas voters, even though he lost, resonates across the country. As we send it back to New York, Gayle, I know you have news in regards to this. 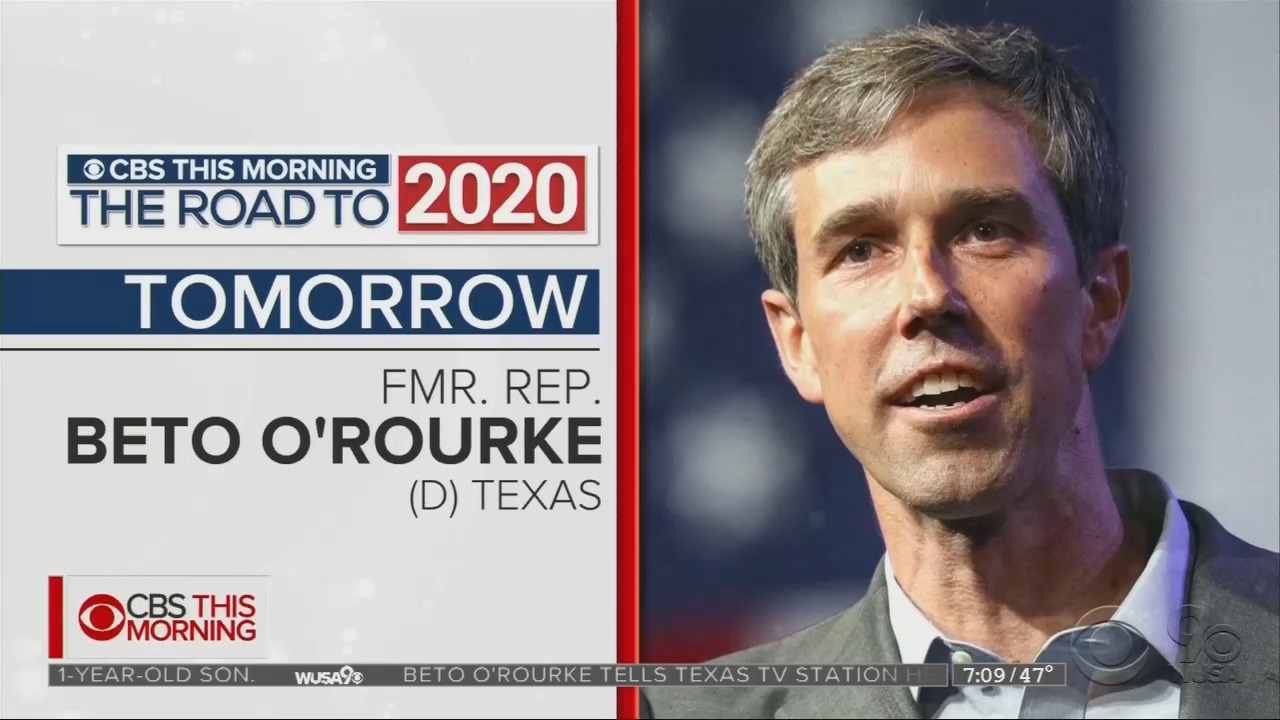 KING: I do. May I just say your voice sounds a little better. I hope you feel as good as you look. I'll just say that. You're absolutely right. As soon as this show is off, getting on a plane, heading to Cedar Rapids, Iowa. Maybe I'll see you on the road out there later today. We're going to sit down with Beto O'Rourke later in Iowa for his only national TV interview about his decision to run for president. And you can see that tomorrow. We like when we can say this only on CBS this Morning. Thank you. It will be interesting to be on. Any early thoughts? Because I remember on 60 Minutes, “I am not winning. It would not be good for my family, I'm not getting in.”

DICKERSON: They never pay the price for that kind of stuff. It’s like all those vice presidential candidates who say, “I won't take it.” Then of course they take it. I think there's an old adage in politics, your best day is the day you're announcing. He got a favorable profile in Vanity Fair from the most famous photographer, Annie Liebovitz. He’s had a glowing start, but campaigns are long, brutal and grim. It's going to be long road.

BIANNA GOLODRGYA: Yeah. It is worth noting that his voting record has skewed more to the center than progressive. So, the internal debate within the party will continue following his announcement.

DICKERSON: And, man, a lot of candidates.