Minutes after the Virginia Pilot broke the news on Friday that a then-25-year-old Ralph Northam featured a KKK image in his medical school yearbook, the Washington Post jumped to the Virginia governor’s defense and informed readers that the Democrat has a black pastor and is against Confederate statues.

After explaining that a “photograph on Gov. Ralph Northam (D)’s medical school yearbook page shows a man wearing blackface next to another person in Ku Klux Klan robe,” writers Laura Vozzella, Jim Morrison and Gregory S. Schneider tried to limit the damage threatening to destroy Northam’s career: “When he ran for governor in 2017, Northam paid special attention to black churches, often attending two or three every Sunday. His home pastor is African American.” 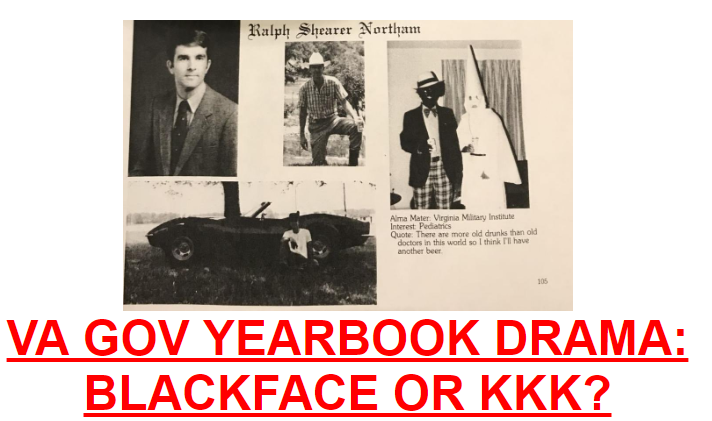 They spun, “After the racial violence in Charlottesville that summer, Northam was among the quickest Virginia political figures to react, making an emotional plea that all Confederate monuments should come down.”

A photo from Gov. Ralph Northam’s medical school yearbook shows two men, one in blackface and one in a Ku Klux Klan robe and hood, on the same page as the governor.

The photo, which The Virginian-Pilot obtained a copy of Friday from the Eastern Virginia Medical School library, comes from the 1984 yearbook, the year Northam graduated.

On the half-page set aside for Northam, there is a headshot of him in a jacket and tie, a photo of him in a cowboy hat and boots and a third of him sitting casually on the ground, leaning against a convertible.

The fourth photo on the half-page has two people, one wearing white Ku Klux Klan robes and a hood, the other with his face painted black. The person with the black face is also wearing a white hat, black jacket, white shirt with a bow tie and plaid pants. Both are holding canned drinks.

The Washington Post also tried to tag this political outbreak as a partisan effort by conservatives:

None of this is surprising, considering journalists spent the week trying to cover for Governor Northam after he appeared to defend infanticide. CBS spun that scandal as conservatives “pouncing.”