The journalists at CBS This Morning, Monday, eagerly grilled Ken Starr about his investigation of Bill Clinton in the '90s. Co-host Norah O’Donnell also pressed the former special counsel about Supreme Court nominee Brett Kavanuagh’s role in looking into the Clintons.

O’Donnell demanded, “Monica Lewinsky has said the release of the Starr report, the 445 page report was one of the worst days of her life. She wants an apology. Will you apologize to her?”

Starr refused, saying he was only doing his job and following events as they happened. However, earlier, on the general subject of the investigation itself, Starr lamented having to look into the Lewinsky matter to begin with.  O’Donnell pounced: “What parts of the Lewinsky investigation do you regret?”

The journalists on CBS haven't changed their tone from the '90s. On August 9, 1994, then-CBS News anchor Dan Rather informed viewers of “growing controversy” about “whether the newly named independent counsel in the Whitewater case is independent or a Republican partisan allied with a get-Clinton movement.” 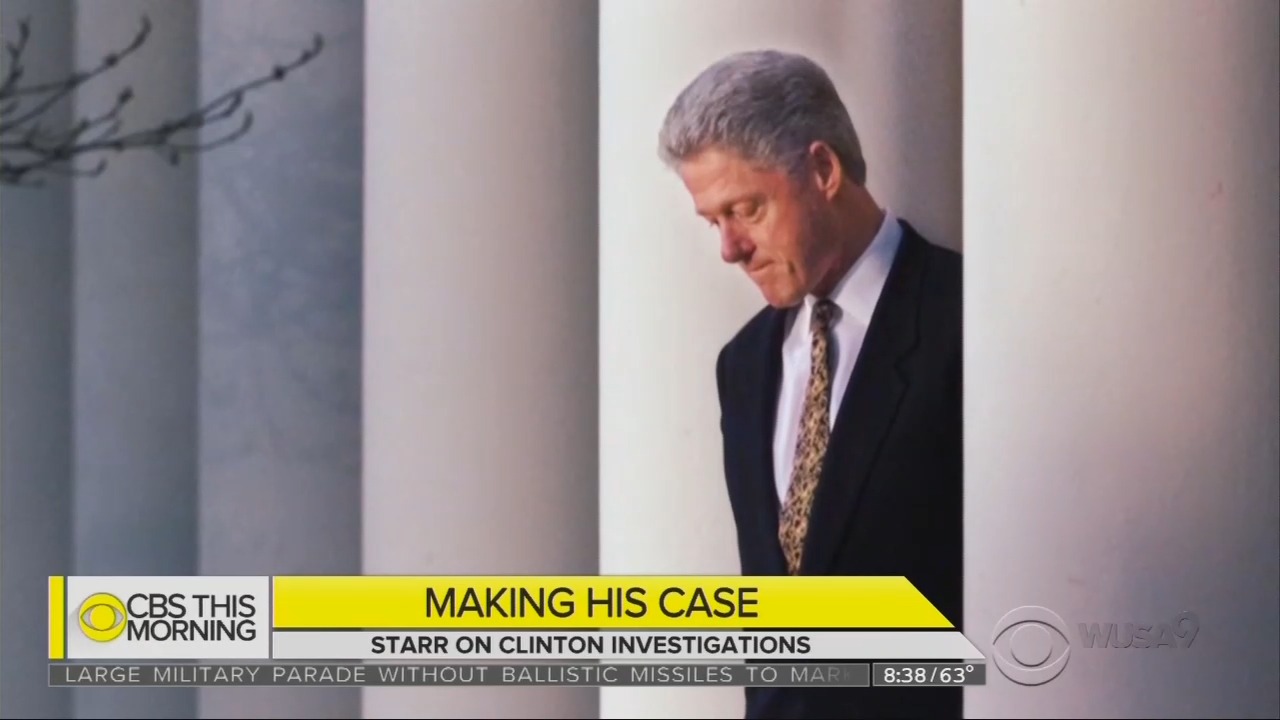 On the subject of now-Supreme Court nominee Kavanaugh, O’Donnell probed:

One of the things we've learned the Supreme Court nominee Brett Kavanaugh worked on your team, worked on this investigation of President Bill Clinton. He wrote and suggested some very explicit salacious questions should be asked of President Clinton but you didn't agree do that. Why? 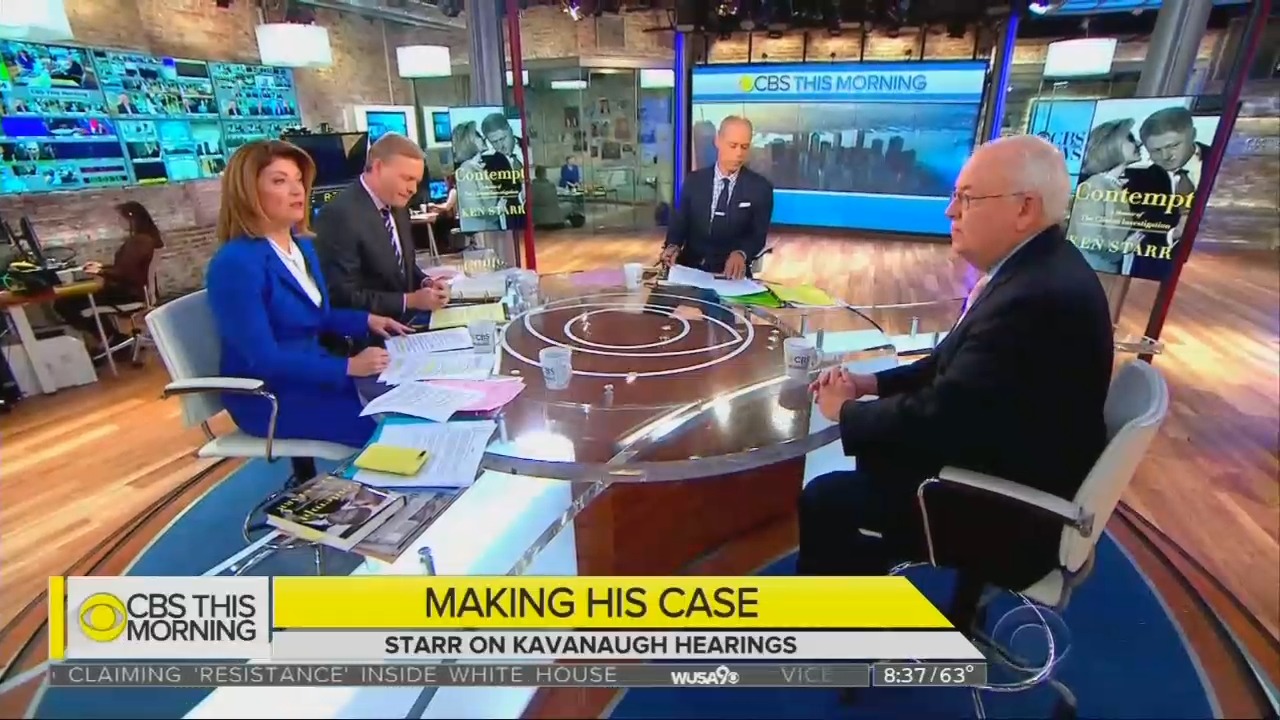 NORAH O’DONNELL: Former independent counsel Ken Starr is speaking out in detail for the first time on CBS This Morning about his investigations and the impeachment of the President Bill Clinton. Starr was appointed in 1994 to look into a failed real estate deal in Arkansas known as Whitewater. Four years later, he investigated the President's affair with White House intern Monica Lewinsky. In his new book Contempt: A Memoir of the Clinton Investigation, Starr writes, quote, “I deeply regret that I took on the Lewinsky phase of the investigation. But at the same time as I still see it 20 years later, there was no practical alternative to doing so.” Ken Starr joins us this morning. Good morning.

O’DONNELL: Let's talk about that. What parts of the Lewinsky investigation do you regret?

STARR: I regretted the whole thing, but it had to be done. When the information came to us that the president of the united States may have been in the process of committing perjury, obstructing justice, we went to the Attorney General of the United States, Janet Reno. She agreed and so the rest is all history. That's what I try to do in this book.

O’DONNELL: Let’s remind people of some of that history. How did your office get the tip about Monica Lewinsky?

STARR; So when you hear that a woman has information about an alleged affair that the President and you're investigating Whitewater, do you say we don't need to investigate that? That's not relevant? What was going through your mind in terms of investigating it?

DICKERSON: You started with a land deal, Whitewater and it ended all the way at Monica Lewinsky. You, as you just outlined, were following kind of the course of events as they happen. When people talk about the current Special Counsel investigation, they say, well he started to look into collusion. But now it’s finding its way into other places. Is there anything wrong with a prosecution that starts in one place and ends somewhere else?

O’DONNELL: So President Trump’s legal team is considering whether he should sit down for an interview with Robert Mueller. Do you think he should?

STARR: I think as the president of the United States he should. If I'm a criminal defense lawyer I'm saying don't do it. There’s too great a risk.

DICKERSON: Apply that perspective to the perspective that prosecutors might be setting up what Rudy Giuliani has been calling a perjury trap for the President. Is that something respectable prosecutors do and do you think that’s what Robert Mueller is doing?

DICKERSON: Would Mueller do that?

O’DONNELL: One of the things we've learned the Supreme Court nominee Brett Kavanaugh worked on your team, worked on this investigation of President Bill Clinton. He wrote and suggested some very explicit salacious questions should be asked of President Clinton but you didn't agree do that. Why?

STARR: Well, we wanted to respect the dignity of the presidency and I think that we did that. But we had to get to the bottom of things. We asked all the questions what should we ask and it was a deliberative process.

DICKERSON: One of the other things you talk about in the book is you say an indulgent and prosperous nation readily forgave Bill Clinton. Give me your assessment of the nation and its moral judgment it made on the president. You talk about prosperity.

DICKERSON: Because one of the defense arguments that you seem to be alluding here to is as a lot of people said, the country's doing well, the economy's humming, why are you going to pick on this president who has got the country going so well. And the echo of that we hear with President Trump said I don't think Democrats will impeach me since I'm doing such a good job. Do you see parallels in that?

STARR: Oh, there are many parallels.

DICKERSON: But do you send a moral warning to the country to say, “Just because things are going well, doesn’t mean you should overlook these important questions about the rule of law, truth and — ”

O’DONNELL: Monica Lewinsky has said the release of the Starr report, the 445 page report was one of the worst days of her life. She wants an apology. Will you apologize to her?

VLADIMIR DUTHIERS: The day that she was questioned in a hotel room was dubbed Operation prom Night. Why was a sting operation necessary?