Deluded Chuck Todd: Media Bias a ‘Campaign Creation’ ‘Not Based’ in ‘Fact’

Don’t talk to Chuck Todd about the liberal media. The Meet The Press host on Sunday snapped at David Brody, telling the CBN political analyst that dislike of a partisan press is simply a “campaign creation” of the late Fox News CEO Roger Ailes. Todd huffed that it was “not based in much fact.”

Appearing on a panel discussion, Brody pointed out that the approval rating of Donald Trump and that of the mainstream media aren’t that high. Todd cut him off and offered a conspiracy theory about the reason Americans don’t trust the press: “Well, the conservative echo chamber created the environment.... It's been a tactic and a tool of the Roger Ailes-created chamber. So, let's not pretend it is not anything other than that.”

Brody responded by pointing out how widespread distrust is of journalists: “But those independents also distrust the media. This is not just Republicans. It is many Americans across the country.” 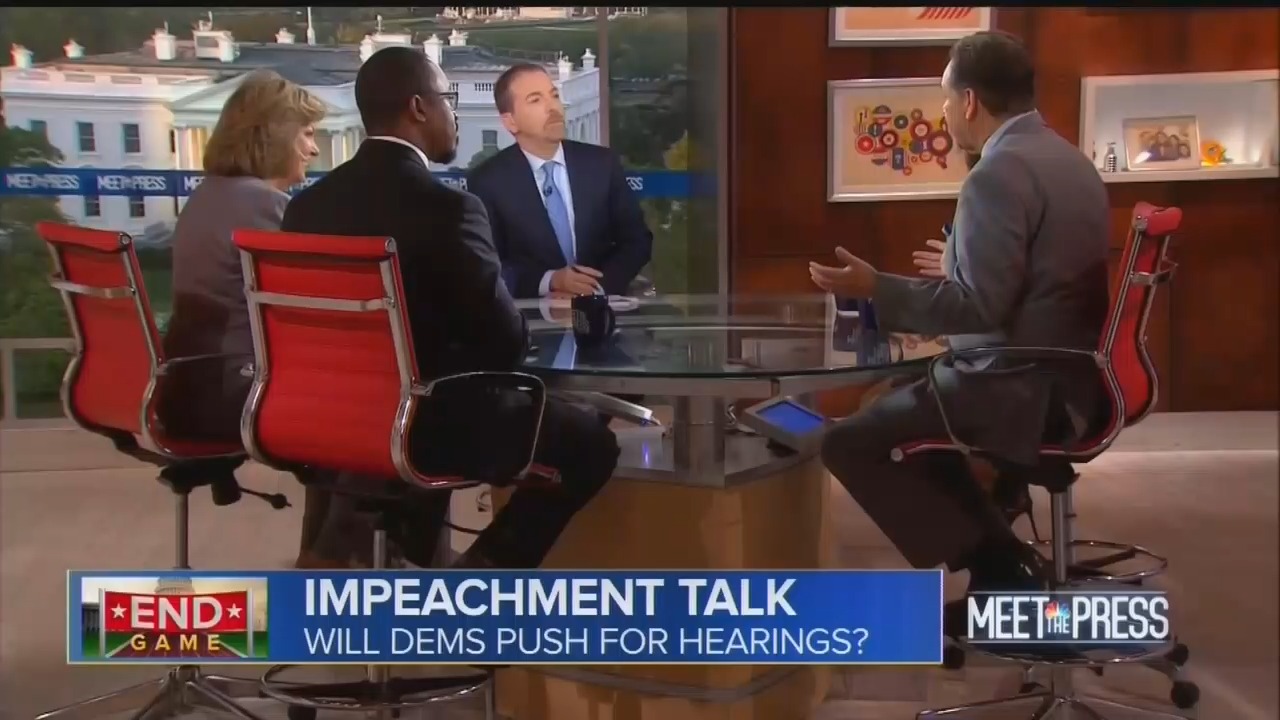 Todd sputtered: “I take your point. I'm just saying it was a creation. It was a campaign tactic. It's not based in much fact.” This kind of denial of the media’s obvious bias is common for the journalist. On February 19, 2013 he dismissed: “There's this whole sort of mythology of this, 'the media's out to get conservatives.'”

Todd himself has had an ongoing conflict of interest in political coverage as his wife, Kristian Denny Todd, does direct marketing campaigns for Democrats. Mrs. Todd donated thousands to Democrats, including Hillary Clinton's running mate, Tim Kaine. During 2016, Todd did not provide a disclaimer when he interviewed the liberal senator.

In July, the Meet the Press host let hard-left candidate Alexandria Ocasio-Cortez redefine socialism in order to “sell” it to “older Americans.” Remember Barack Obama? Here is just one example of how he gushed over the Democrat in 2009:

“In just a few short hours, the President was able to do a diplomatic decathlon, packing in a week’s worth of international diplomacy into 12 hours....America’s unofficial royalty, the President and First Lady, reconnected tonight for more ceremonial duties, including a private audience with actual royalty, the Queen herself.”
— NBC White House correspondent Chuck Todd, April 1, 2009 Nightly News.

Finally, the press has been 90 percent negative in its evaluative coverage of Trump. But don’t tell any of this to Chuck Todd. Media bias is all just a delusion.

CHUCK TODD: There’s some in President Trump’s orbit who think the threat of impeachment actually will motivate this base.

JOSHUA JOHNSON (Host, NPR’s 1A): We heard from Nancy Pelosi this week — she spoke to my colleague at KQED in San Francisco, you heard Jerrold Nadler speaking, or a number of lawmakers —  speaking about impeachment should be a bipartisan thing, a tool. I am just not sure what else Democrats have that's going to motivate them show up at the polls for ardently than the prospect of doing something about Donald Trump. I mean, I understand why Republicans are motivated to keep that agenda in what else is there emotionally to get Democrats out?

TODD: I was just going to say, I think the Democratic leadership, and the disconnect, you know Republicans, the Republican base, David, wanted a more aggressive Republican Party the go after Obama and Clinton. The leadership was always like, “No, no, no. We have got to use a process.” We are always trying to sort of hold back those that id in the party. And they paid a price in Donald Trump. And I am thinking all of these responsible Democratic leader that are preaching impeachment caution, are these people and the base may say, “Give me Michael Avenatti, I don't want your responsible guys.”

DAVID BRODY (Chief political analyst CBN News): Well, right. And I think that’s something the Democrats are going to have to deal with. But I tell you, on the Republican side, they got what exactly they wanted. A guy that was going to shape things  up. I think one of the best things going in Donald Trump’s favor, we all know this, is the mainstream media. I hate to say it — I know I’m sitting on a Meet the Press roundtable — but the truth of the matter is 62 percent think the media’s biased. So, if you look at the approval rating of Donald Trump and the approval rating of the mainstream media— 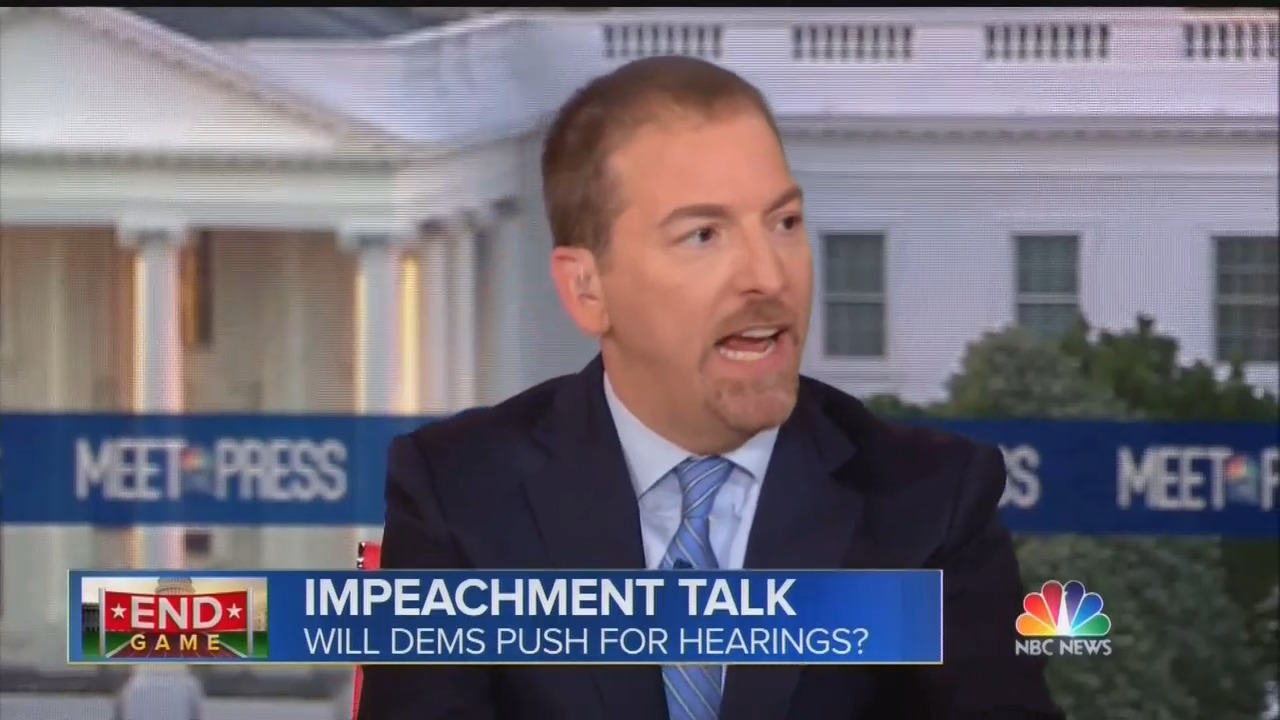 TODD: Well, the conservative echo chamber created environment. It’s not — no, no, no. It’s been a tactic and a tool of the Roger Ailes-created chamber. So, let's not pretend it is not anything other than that.

TODD: No, It is a separate Trump. It is a different version of the Republican Party.

BRODY: But those independents also distrust the media. This is not just Republicans. It is many Americans across the country.

TODD: No, no. I take your point. I’m just saying it was a creation. It was a campaign tactic. It’s not based in much fact.