The Media Get Trumped: President’s Polls Improve Despite 90% Negative Coverage 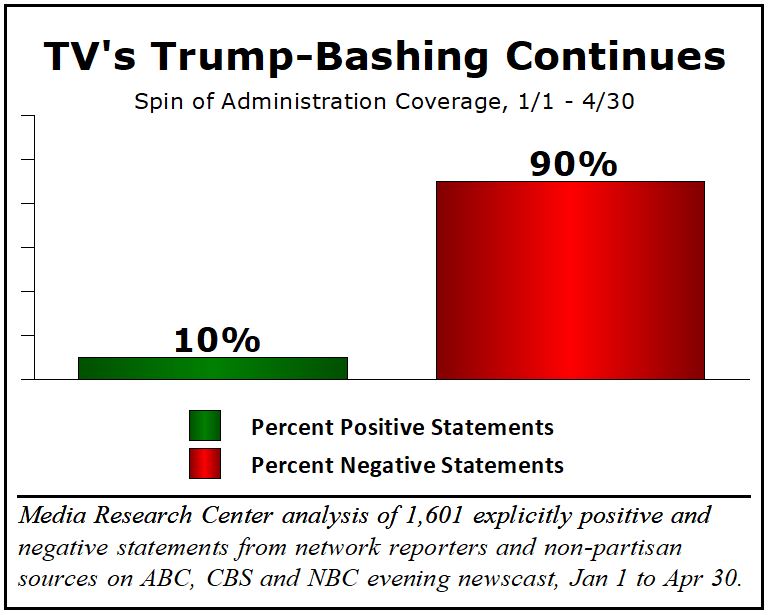 The liberal media’s war against President Trump was as fierce as ever during the first four months of 2018, but the onslaught appears to be for naught: In the face of massive and hostile coverage from ABC, CBS and NBC, Trump’s overall job approval rating actually rose, from 37 percent in mid-December to roughly 43 percent at the end of April.

The Media Research Center studied all broadcast evening news coverage of the President from January 1 through April 30, and found 90 percent of the evaluative comments about Trump were negative — precisely the same hostile tone we documented in 2017.

But unlike last year, when the RealClearPolitics average depicted a slow but steady erosion in the President’s job approval numbers, the public has apparently warmed to Trump in 2018, even as the networks are as frosty as ever.

For this report, MRC analysts examined all 1,065 network evening news stories about President Trump and top members of his administration during the first four months of this year. The coverage totalled a whopping 1,774 minutes, or roughly one-third of all evening news airtime.

(For comparison, in 2015 and 2016, coverage of President Obama amounted to just ten percent of all evening news airtime.)

Nearly two-fifths (39%) of the TV coverage we examined focused on Trump scandals and controversies, while 45 percent was devoted to various policy issues. The remaining airtime was spent on controversies involving other top Trump officials, such as EPA Administrator Scott Pruitt, or did not involve specific topics.

Network coverage of those topics, plus a host of other smaller controversies involving the President, was almost entirely negative: of the 598 statements we tallied about Trump’s personal controversies or scandals, virtually all of them (579, or 97%) were negative. 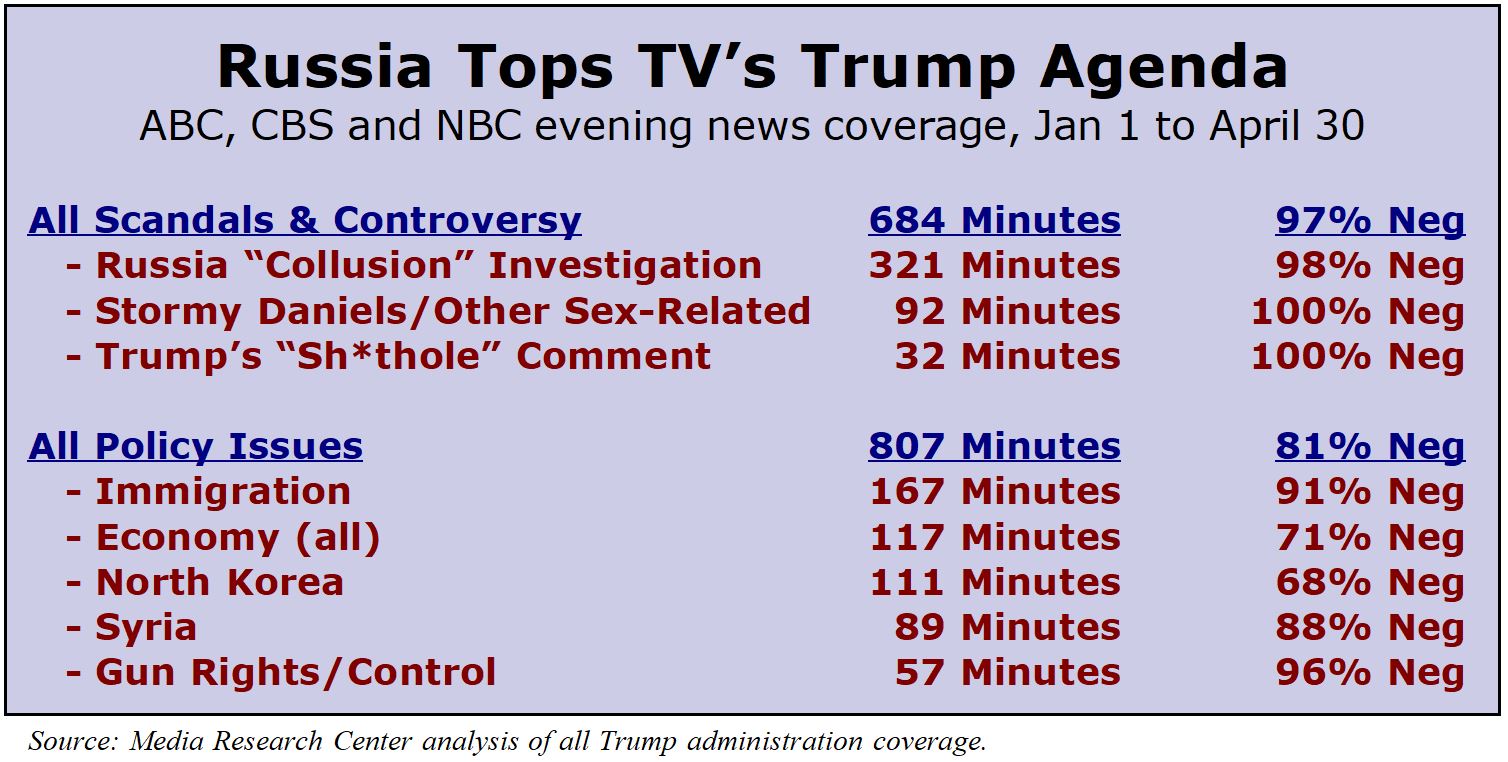 (As always, our analysis of “spin” tracks only explicitly positive and negative statements from reporters and non-partisan sources; it excludes neutral statements as well as statements from partisans such as Trump praising himself or Democrats criticizing him.)

When it came to policy matters, the President fared somewhat better — but only in contrast. Of the 542 opinionated statements involving a policy matter, 440 (81%) were negative, compared with 102 (19%) which were positive.

The policy stories earning the most TV airtime in 2018 were immigration (167 minutes), the economy (117 minutes), North Korea (111 minutes), Syria (89 minutes) and gun rights (57 minutes). The networks’ spin on immigration, Syria and gun rights was extremely negative (between 88% and 96% negative). And, despite the potential of a breakthrough with North Korea, the coverage of that topic was tilted two-to-one against the President (68% negative vs. 32% positive).

The President’s handling of the economy was a mixed bag. A majority of the networks’ airtime (66 minutes) was devoted to Trump’s decision to impose tariffs and threaten a wider trade war with nations such as China, an aspect of economic policy which drew mostly criticism (90% negative spin).

But the remaining airtime (51 minutes) consisted of mostly positive coverage (73% positive) for the rest of Trump’s economic agenda: job growth, tax reform, deregulation, and plans for more infrastructure spending. Yet this coverage has amounted to less than three percent of TV’s total coverage of the President this year.

The positive economic story is probably one reason why the public has rewarded Trump with higher approval ratings, despite the bad press. Another is that the public’s trust in the media has been eroding for years, which means that journalists are less credible critics than they might have been years ago.

There’s no precedent for a President receiving such a sustained level of negative press over such a long period of time. The fact that the public has become more favorable towards the President in this environment is the latest sign that the media watchdog’s bite isn’t as menacing as their bark suggests.