Chuck Todd: It's 'Mythology' That MSM Hostile To Conservatives

Chuck Todd can't imagine what could ever have given conservative politicians the idea that the MSM is unfriendly to them. C'mon Chuck: we know you're a NewsBusters reader.  Every day here, we document the liberal media's hostility to conservatives.

On today's Morning Joe, NBC political director Todd repeatedly spoke of a supposed "mythology" among conservative politicians and their staffs that the "big, bad non-conservative media" is "out to get conservatives."  That in turn explains why, according to Todd, conservative officials are reluctant to appear on non-Fox shows.  View the video after the jump. 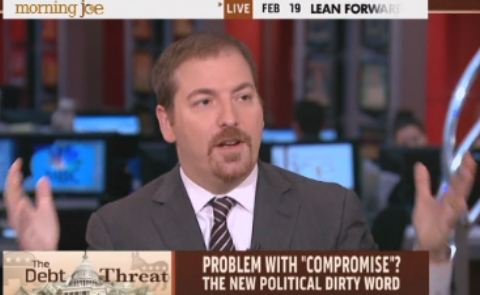 Watch Todd defy decades of documented proof of the MSM's hostility to conservatives.  If Chuck doesn't have time to review all our archives, surely he could benefit from a look at our annual DisHonors Awards for the worst in mainstream media bias.

JOE SCARBOROUGH:  Chuck Todd, is there another Republican allowed to speak on a Sunday other than Lindsey Graham?

CHUCK TODD: I think part of everything is that there's only like three Republicans who agree to do it.

SCARBOROUGH: Nobody wants to talk.

TODD: McCain and Lindsey are two of the few people --

SCARBOROUGH: Is that not remarkable?

BRZEZINSKI: It's a problem.

TODD: There are fewer and fewer Republicans that will go on non-Fox shows.

SCARBOROUGH: Why is that?

TODD: I think that it's, I think that the mythology of the big, bad non-conservative media has gotten into some offices, and so that there's this fear of, oh we can't do, we can't do anything that's not--it's sort of this--and I feel like it's a mythology that now younger staffers believe and then it infuses, and then these guys, they actually believe the spin that's out there, oh, my God, that's what the mainstream media does, they do anything to disrupt the conservative agenda. And so literally, you only--Lindsey, John McCain, you know, that's been my, I just fear that it's sort of like this whole, there's this whole sort of this, the mythology of this, the media's out to get conservatives is believed among more and more actual staffers.