Time for the Jim Acosta Commentary: We in the Media Deserve an Apology!

If one person on CNN personifies the idea that the cable network has become an opinion network and not a news outlet, it’s Jim Acosta. The CNN Chief White House correspondent regularly appears for what amounts to an on-air commentary. On Wednesday, he whined about Donald Trump calling out some of the nasty comments from ABC: “Sometimes there are not more important things than the President's grudges that he feels he has to nurse on a daily basis.”

Seemingly ignoring the fact that Sarah Huckabee Sanders on Wednesday DID condemn Roseanne Barr’s disgusting comments, Acosta moaned about “having the White House press secretary coming out here and shaming the media and blaming us for making all sorts of comments that need apologies when they themselves owe the American people plenty of apologies.”

There’s no news in any of Acosta’s comments. These days, he appears on CNN to attack Republicans and opine on issues. And if he were an opinion journalist, that would be fine. But in theory, Acosta is supposed to be some sort of news person.

In March, the journalist lamented not being called on for a White House briefing. As Rich Noyes noted on May 17, it’s not as though Acosta was equally tough on Barack Obama. He quite often fawned over the Democrat. 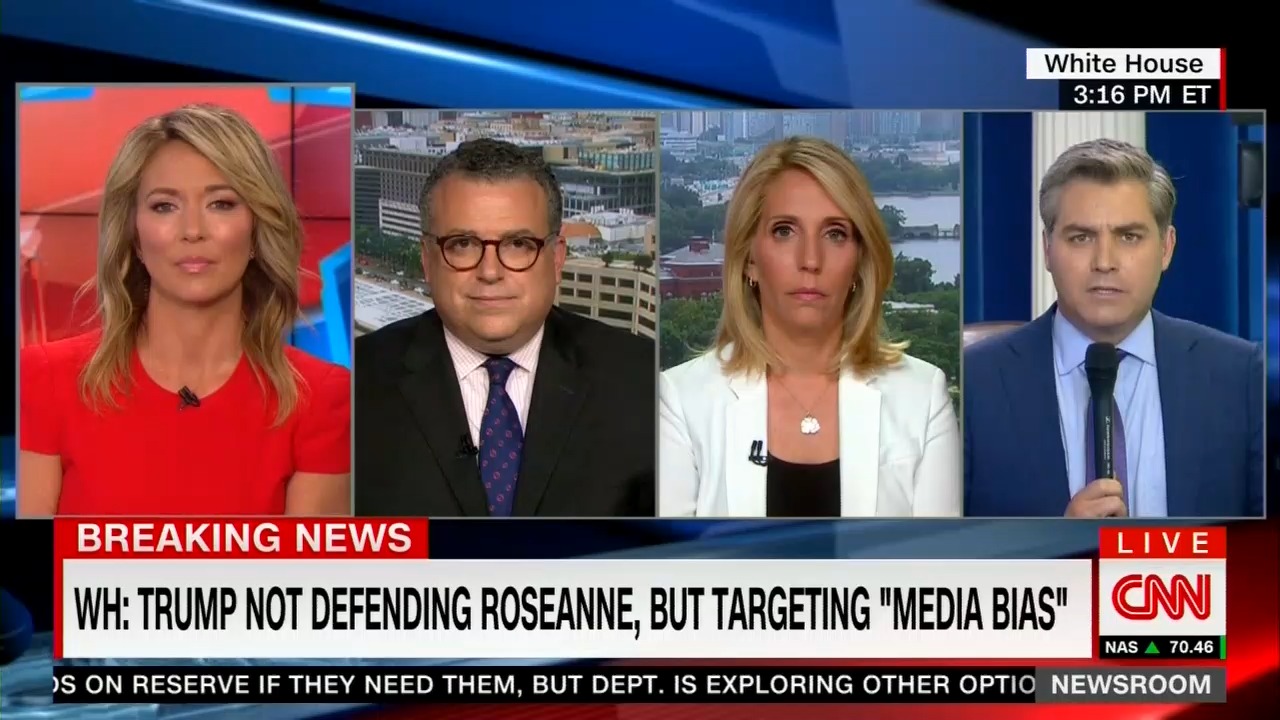 BROOKE BALDWIN: Jim Acosta, let me pivot over to you there in the briefing. What were you asking there at the end?

JIM ACOSTA: I tried to ask where were the President's policies for all the things he's said over the years. Sarah Sanders was very careful to point it out and turn it back on the media and askING why haven't personalities at network apologized to the President for things they’ve said. But, of course, this is a president who launched his campaign saying that Mexican immigrants are rapists, he's said over the years that, you know, in talking about African-American athletes, calling them sons of bitches, talking about the violence in Charlottesville, saying that there are very fine people on both sides. Obviously, these are all comments he's made over the years where people on both sides of the aisle have been clamoring, almost begging the President to apologize for comments that he's made. You only have to go to a Trump campaign rally once in your life to hear the kind of hostility that he generates on an almost daily basis. So it's a bit much, I think, for the White House press secretary from the podium to come out here and try to shame the media and say it's somehow our fault that Roseanne Barr put out this tweet. The President decided to weigh in on it. One question not asked of Sarah Sanders, by the way, was yesterday she said the President has more important things to do. Well, sometimes there are not more important things than the President's grudges that he feels he has to nurse on a daily basis and that's why he posted that tweet earlier this afternoon going after ABC.

He just can't help himself, Brooke. That was in direct contrast to what Sarah Sanders told reporters yesterday that the president had other things to do and here he comes out today and starts tweeting about Roseanne Barr. It just gets to the lack of seriousness. Forget about the fact that Kim Kardashian is here at the White House today. And what planet that is anything resembling normal? Because it's not. She shouldn't be here talking about prison reform.

It's very nice that she is here but that's not a serious thing to have happen here at the White House. But really that pales in comparison, that level of seriousness pales in comparison to what the President does when he weighs in on the Roseanne Barr tweet, fails to condemn the racism at the heart of her remarks and having the White House press secretary coming out here and shaming the media and blaming us for making all sorts of comments that need apologies when they themselves owe the American people plenty of apologies for things that the president has said over the years. And of course we know past being pro log with this president, those apologies likely will not be forthcoming, Brooke.