CBS was for the vulgar White House Correspondents Dinner before the network was against it. On Saturday, CBS This Morning journalist Jamie Wax praised the “standout” comedian Michelle Wolf, touting her as “singled out for the quality of her comedic craftsmanship.” Two days after Wolf made jokes at the expense of Sarah Sanders's looks, hosts on the same show chided the “below the belt,” “extreme” performance.

On Saturday, Wax gushed over the comic, praising her: “Wolf has been consistently singled out for the quality of her comedic craftsmanship. A lot of times you feel like a comedian's doing a five minute act from their talk show or on a variety show. But you really work on crafting that as its own piece.”

Sounding like a press agent, he lauded: “Michelle Wolf has created a fast rising career for herself by being a standout standup.” It’s not as though CBS should be surprised that Wolf made jokes many saw as attacks on the physical appearance of Sarah Huckabee Sanders. On Saturday, she told the show: “I like making fun of people to their face more than anything.” 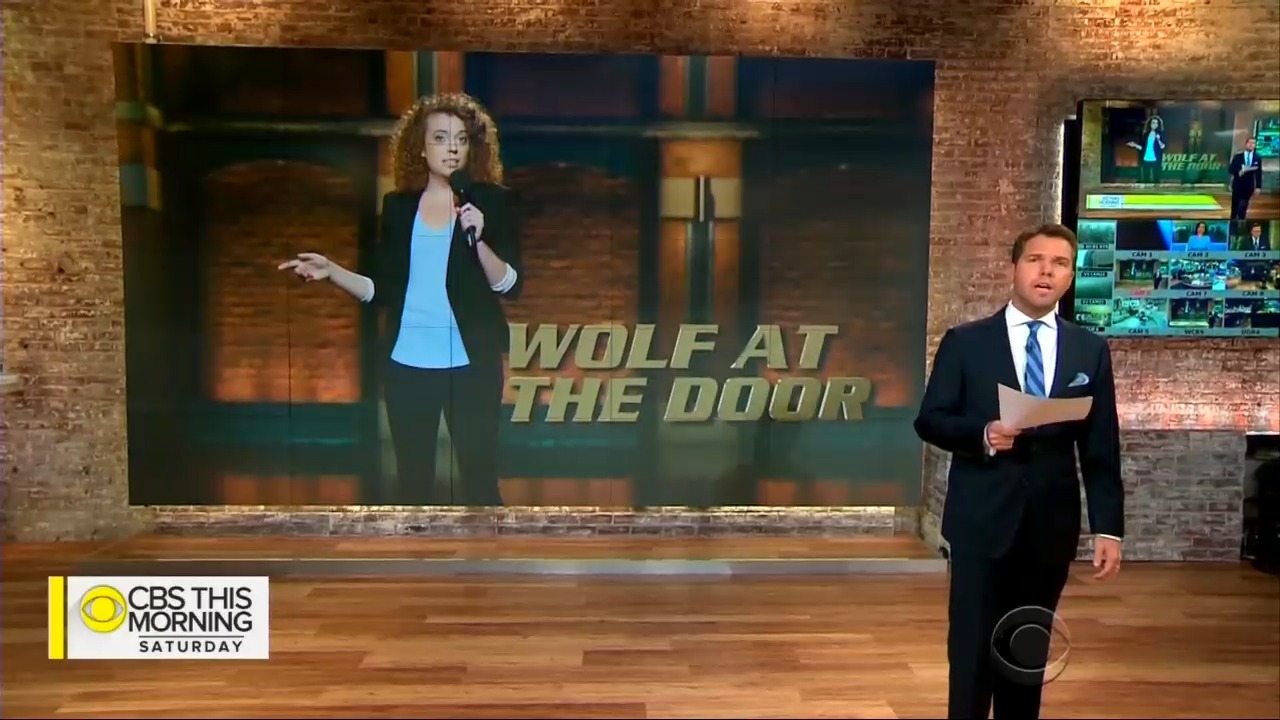 Yet, when some of the jokes weren’t printable, CBS This Morning reporter Vladimir Duthiers on Monday turned into a scold: “Some say this year’s host hit new extremes.”

NORAH O’DONNELL: Well, they need to look clearly about what the mission of the White House Correspondents Association and I think part of it includes civility. And jokes are fine and humor is fine, but there are some stuff that is below the belt. 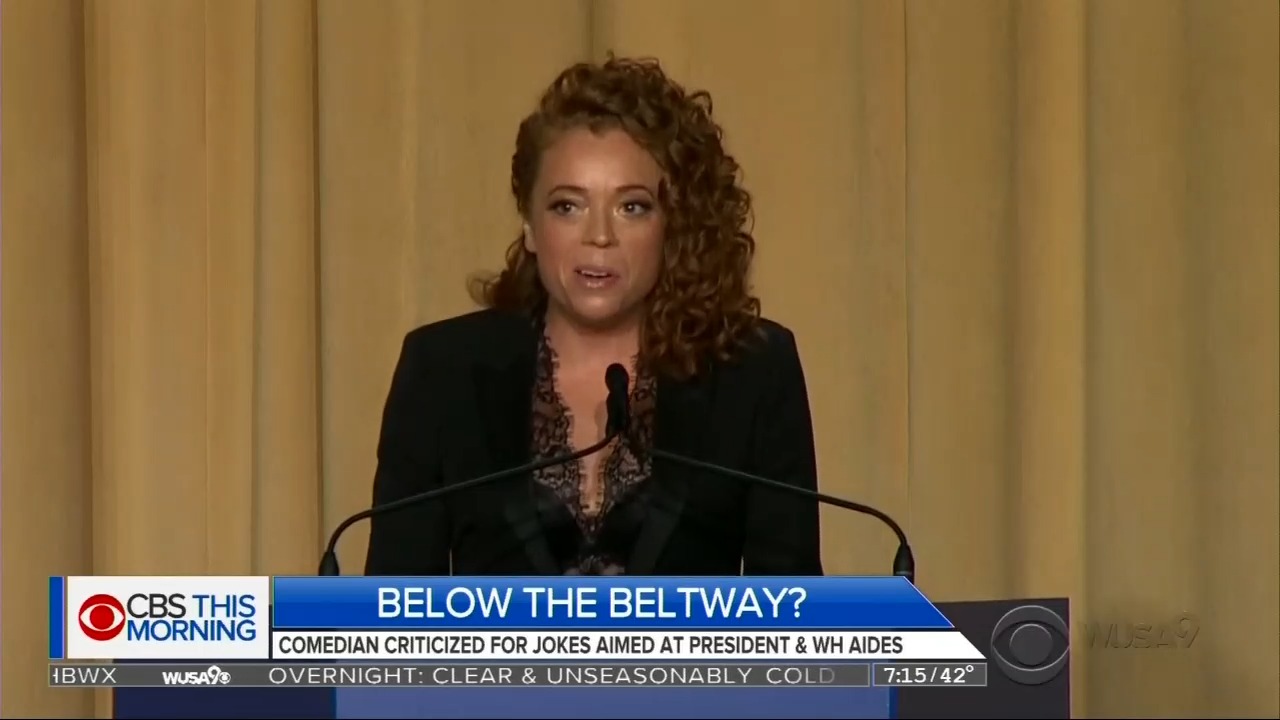 Co-host John Dickerson suggested of the dinner itself: “So maybe they need to rethink it.”

It’s rather lame for CBS journalists to now pretend to be horrified about Wolf on Monday, given how much they promoted her on Saturday.

A partial transcript of the original Saturday segment, which aired at 9:07am ET on April 28, is below. Click “expand” to read more:

MICHELLE MILLER: Well, the guest of honor may be a no show, but that is not stopping one of Washington's premiere events or this year's host. We'll talk to comedian Michelle Wolf about MC-ing tonight's White House Correspondents dinner and her fast rising career.

MILLER: That was Michelle wolf in a clip from her new HBO special Nice Lady. The comedian has grabbed the spotlight through her success in standup and her regular role on the Daily Show.

ANTHONY MASON: And tonight she takes the stage at one of Washington, D.C.'s biggest events of the year. Jamie Wax is here with more. Jamie, good morning. 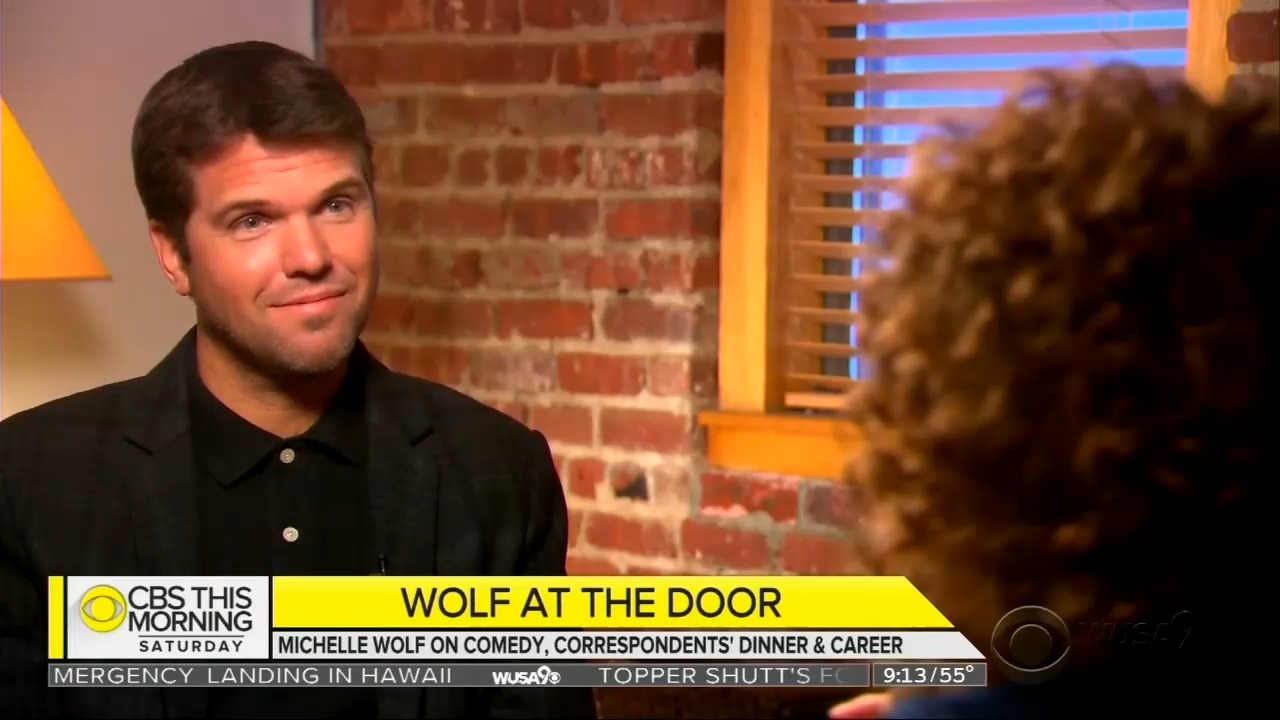 JAMIE WAX: Michelle Wolf has created a fast rising career for herself by being a standout standup. Whether it's talk show appearances, slots at high profile charity events.

MICHELLE WOLF: Like, I was on a date — A guy offered to walk me to my door. He's like I want to make sure you get home safe. No, that's not why you're doing it. That's your last ditch effort to touch a boob.

WAX: Wolf has been consistently singled out for the quality of her comedic craftsmanship. A lot of times you feel like a comedian’s doing a five minute act from their talk show or on a variety show. But you really work on crafting that as its own piece.

WOLF: Yeah, I think it's important to feel like people are seeing like a little show where you're just like no, I did this for you. It wasn't just a small collection of jokes. It was like no, I made you a little thing. I made you a meal.

WAX: The current meal she's taking on is one of the toughest and most prestigious gigs in comedy, hosting tonight’s White House Correspondents Dinner, joining a long list of respected comedians.

WAX: As much as she seems like a natural comedian, humor was not always an obvious gift. On full display was her determined and competitive nature.

WAX: But for the moment, she remains focused on tonight's events with or without the presence of the traditional guest of honor. Does that make it better for you as comedian or harder for you that the President is not there? Would you rather the President being in the room?

WOLF: I mean, I like making fun of people to their face more than behind their backs so it would have been more fun, I think to like, you know, just —  I'm —  none of my jokes changed, I guess. It's nicer to make fun of someone when they're there. I think it's cowardly not to go. I think the other only person who didn't go was Reagan when she was shot. And he called in.

WAX: What are you most concerned about?

WOLF:  I guess I want people to be, like, those were  funny jokes. I'm not trying to make some sort of bigger point or anything. I want people to be like, it was really funny. I'll be happy when it's over. It's a homework assignment.