CBS REALLY loves The Post. The journalists at CBS This Morning have now devoted 20 minutes and 48 seconds over the last month to promoting the Vietnam-era film about The Washington Post’s efforts to publish the Pentagon Papers. Unsurprisingly, the hosts at CBS really enjoy a movie that touts “non-partisan” reporters as “heroes” for exposing a Republican president.

On Wednesday, This Morning co-hosts talked to Matthew Rhys, the actor who plays Pentagon official Daniel Ellsberg. Ellsberg leaked classified data. In later life, he called for the impeachment of George W. Bush and now rails against the “unbalanced” Donald Trump. Yet, there was no hint that this man was in any way controversial. Rhys gushed, “He was a pioneer in his time in whistle blowing if you will and had such clarity of intention about the wrongdoing this war was doing, not just to the United States, but to the country of Vietnam as well.”

Regarding the leaking of the Pentagon Papers by Ellsberg, Rhys spun, “He was a true patriot. But just saw the wrongdoing and says, ‘I can’t live with it.’” Co-host Norah O’Donnell marveled, “True patriot, as you say.” 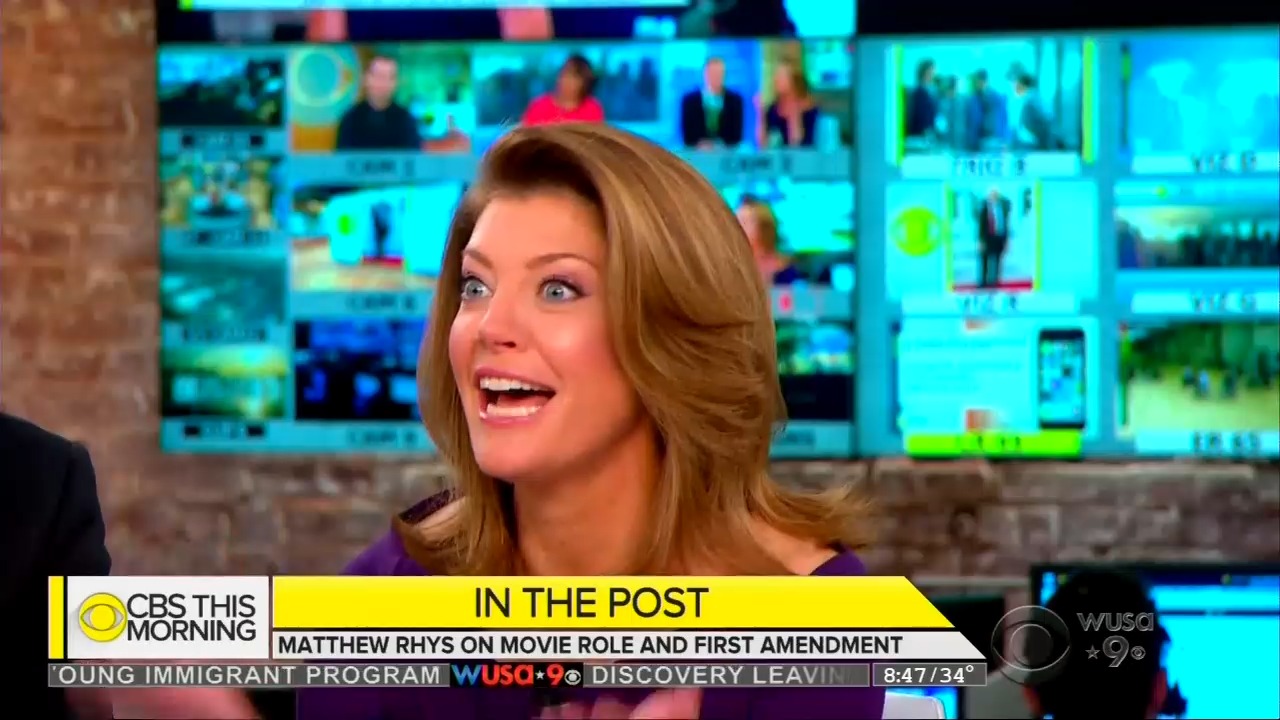 On December 12, co-host Gayle King compared Trump to Nixon and hailed the film as “ripped from the headlines.” On January 3, This Morning celebrated the “non-partisan” movie for cheering “hero” journalists. 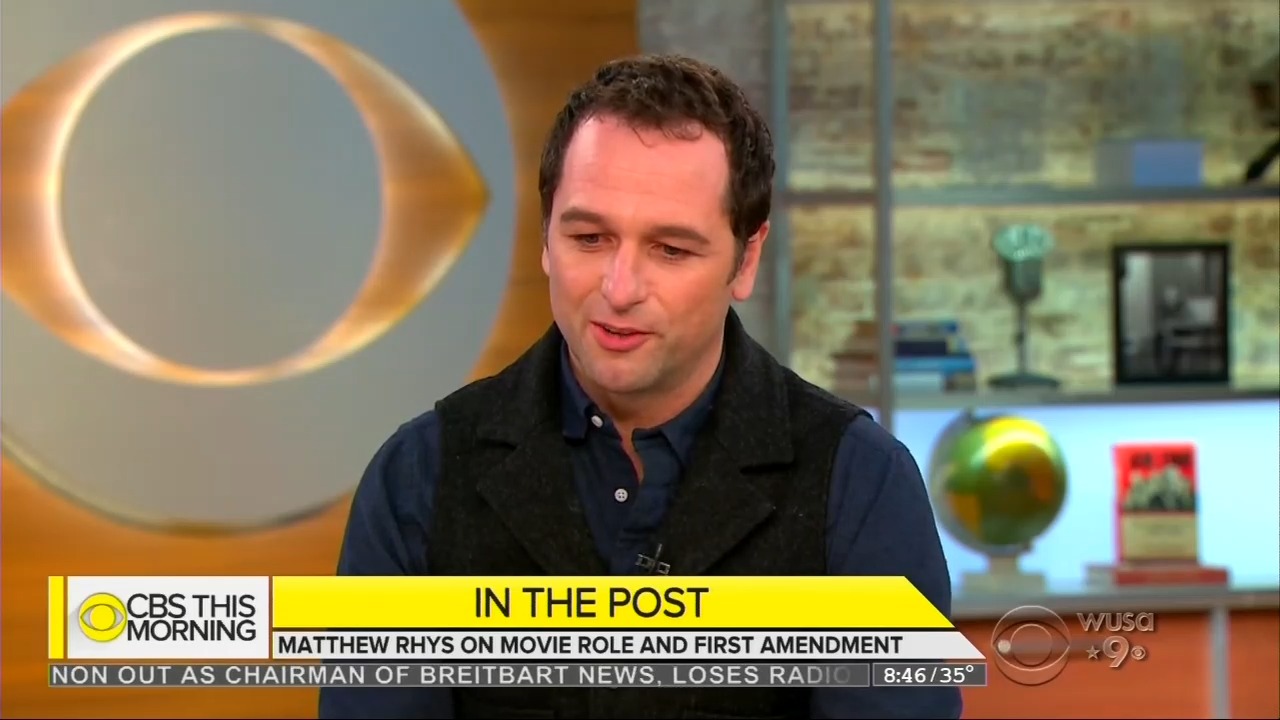 JOHN DICKERSON: The critically acclaimed Steven Spielberg movie The Post highlights the historic events surrounding the leaking of the Pentagon Papers by Defense analyst Daniel Ellsberg. The movie dramatizes The Washington Post’s decision to publish the top secret documents, which detailed America’s decades-long involvement in the conflict in Vietnam.

GAYLE KING: Top officials, including President Johnson’s first Defense Secretary Robert McNamara were implicated in the resulting scandal. But it was Daniel Ellsberg who alerted the press to what was really going on there. Actor Matthew Rhys plays Ellsberg in The Post.

KING: Let the chips fall where they may, indeed. Matthew Rhys, welcome to the table.

MATTHEW RHYS: Thank you very much.

KING: So Time magazine says this about you: “You played the role with a muted matter of fact intensity.” Wow!

RHYS: I think I said that. 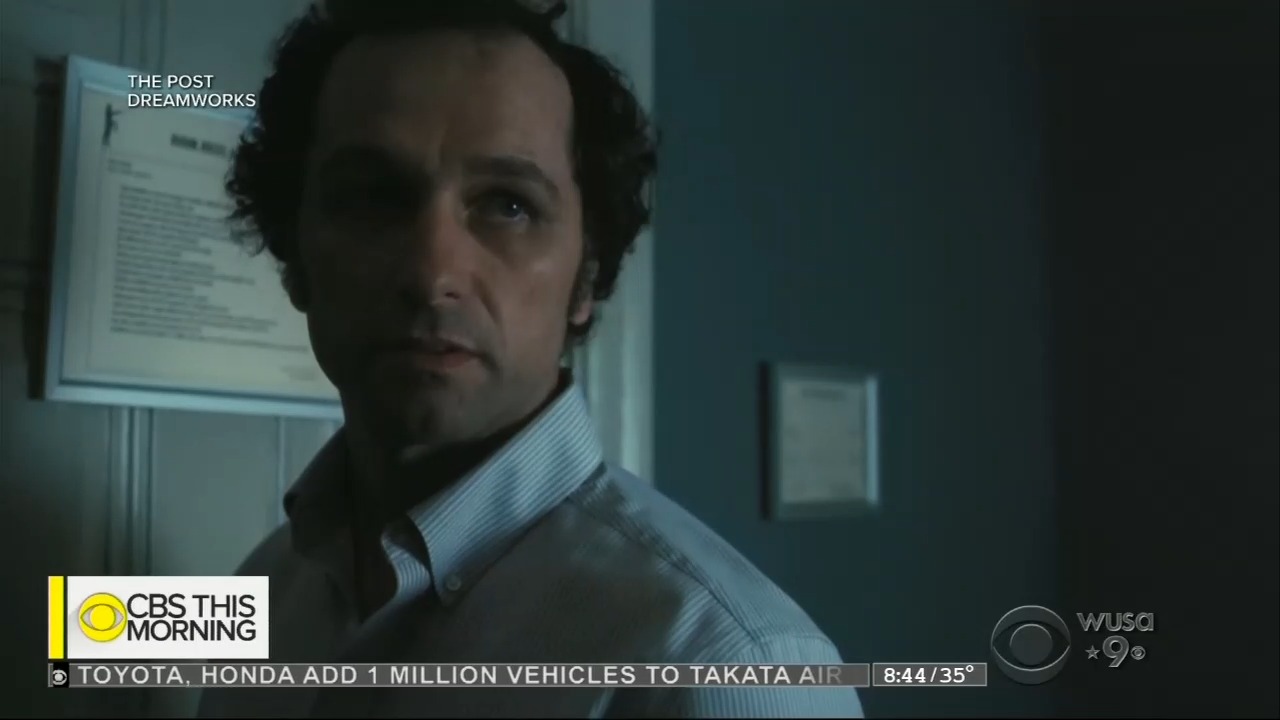 DICKERSON: Nice of them to print that for you.

KING: That’s a very good review. But let’s talk about Mr. Ellsberg and how pivotal he was in history. Tell us about him.

RHYS:  Incredibly so. I was ashamed to say I didn't know as much as should know about what he did.

KING: We forgive you.

RHYS:  Thank you. He was a pioneer in his time in whistle blowing if you will and had such clarity of intention about the wrongdoing this war was doing, not just to the United States, but to the country of Vietnam as well.

KING: And then you meet the real Daniel Ellsberg who's 80-something?

KING:  What struck you most? What did you want to say to him?

RHYS:  Certainly how his campaigning is tireless. He still is as ardent and as fervent as he was then about this sort of –  you know, the wrongdoings in this world. I was — the more I lived, the more I was staggered by his bravery, really, that he knew the consequences and this is a man who was a former Marine for the government, working for the Pentagon, working for Rand. You know, he was a true patriot but just saw the wrongdoing and says, “I can’t live with it.”

NORAH O’DONNELL: True patriot as you say. He was working for the Rand corporation and here he saw a study that had undergone four different presidents, about what had gone into the decision-making of Vietnam, warts and all. It was buried and he took them out surreptitiously and started photocopying. In the movies he had colleagues photocopying the volumes. But in real life who was photocopying the Pentagon Papers?

RHYS: He took his children along.

KING:  How old with they?

RHYS: I’m not quite sure, but they were something like 11 and 8. They were young and they were kind of cutting the tops off where it said top secret. They were helping him slice —  It's what got the FBI ultimately onto him. He was divorced at the time and the children went back and told the grandmother what was happening, like “What we've been doing with father.” And they said, “Oh, cutting the tops that say top secret.”

DICKERSON: Grandma dropped the dime on him.

DICKSERSON: You met him. So, when you met him, are you taking notes or is there something he tells you, “Here's how you play me.”

RHYS: Well, yes. I certainly had a thousand questions for him. My first obvious and stupid question was, “How scared were you? He said, “I wasn't that scared.” That's when I realized that he had this clarity of intention about what he was doing and his conviction was without question because he'd seen, you know, what the body count was coming back to the United States and how it was affecting the Vietnamese.
...