As to why Brazile spoke out about a secret deal Clinton struck to give her some control over DNC personnel and money during the primaries, King sneered, “Your book seems to suggest you were bitter. You were angry. And on top of all of that, you seemed very hurt.” She marveled, “You even called Bernie to explain to him: ‘I found the cancer here.’”

The ex-DNC chair explained what she discovered Clinton had done: “There was a memorandum of understanding in addition to the joint fund-raising agreement that hampered the DNC's ability to control its communication and some of its financial investments.” 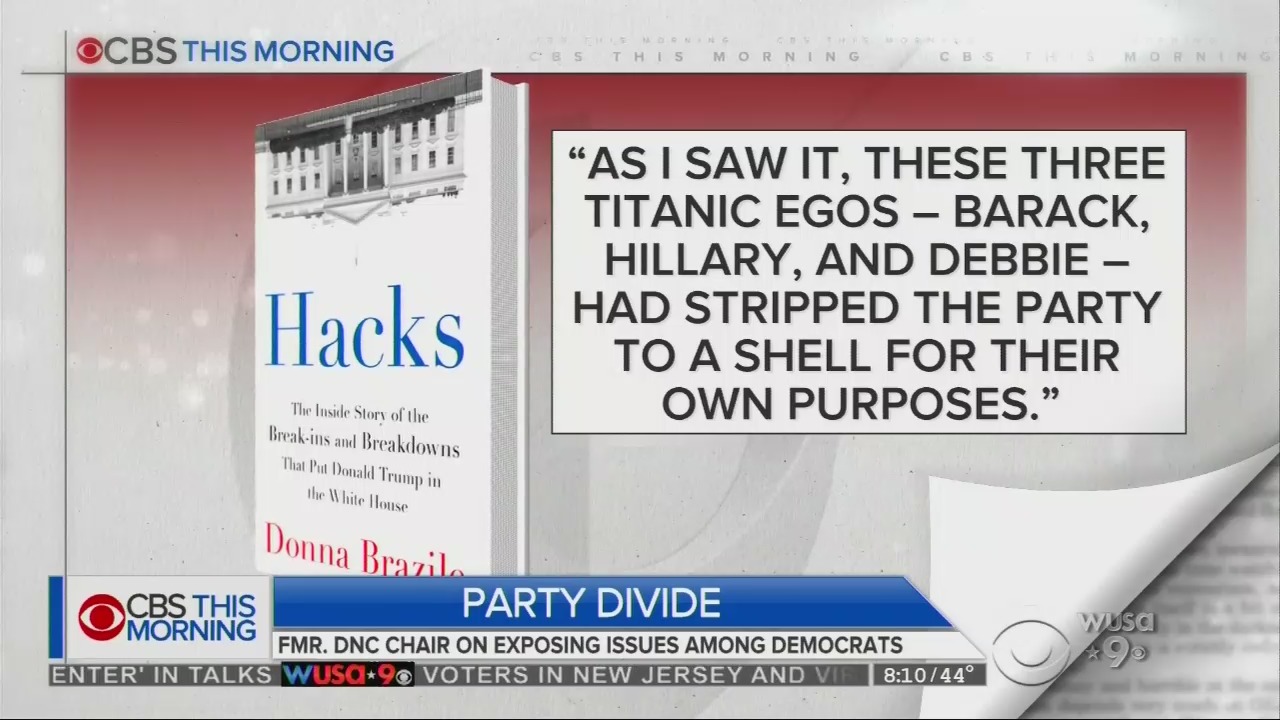 As though she had more knowledge than the woman who was actually there, O’Donnell responded by attempting to question Brazile’s veracity: “That's not entirely true, Donna. What happened was that in 2015 the both Secretary Clinton and Bernie Sanders signed an agreement with the DNC, right? The DNC was deep in debt and agreed to help replenish its coffers.”

CHARLIE ROSE: When you say that Hillary Clinton, Barack Obama and former DNC chair Debbie Wasserman Schultz stripped the party to a shell for their own purposes, what does that say?

BRAZILE: Oh, good. The Democratic Party has lost over 900 legislative seats. We lost over 50 congressional seats.

ROSE: Did they do that to their own purposes?

Finally, the frosty interview came to a close as King offered one more dig against the woman who spoke out against Clinton: “Okay. All I can say is you are naming names and taking numbers in this book... and people are questioning the timing and the motive.”

Who could those "people" be? The Clintons? 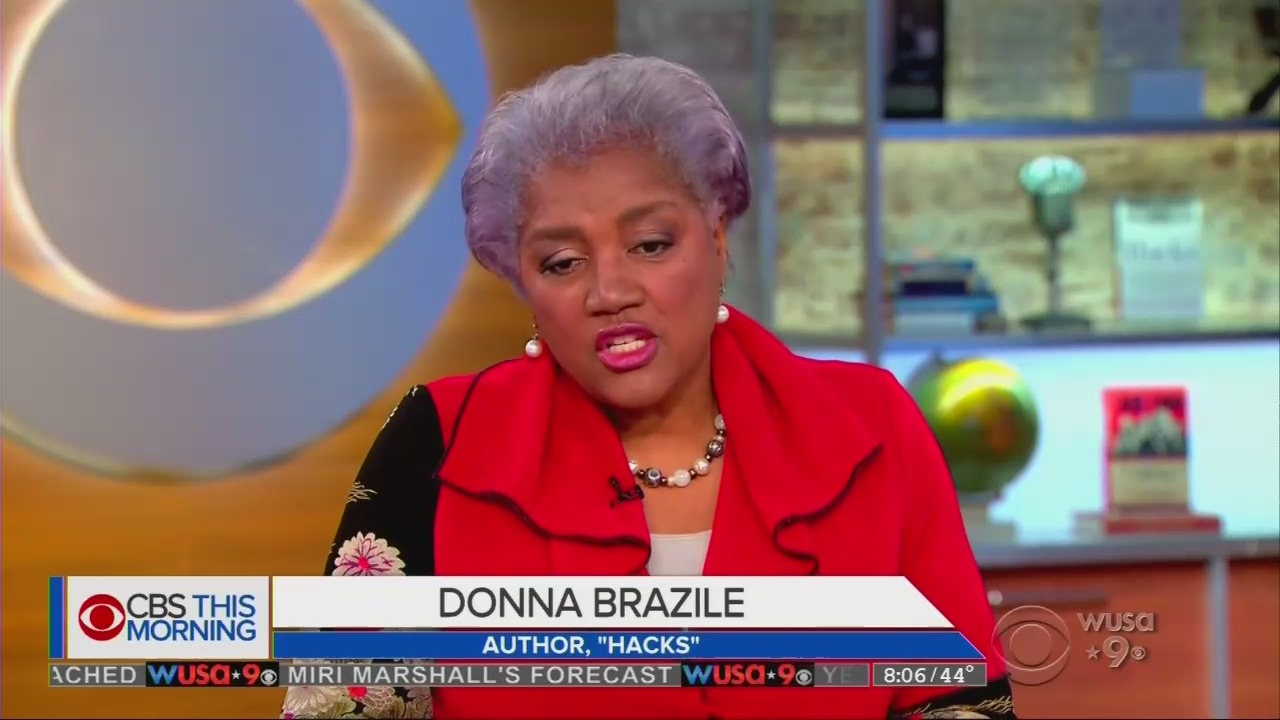 NORAH O’DONNELL: Explosive claims by former Democratic National Committee chair Donna Brazile are bringing attention back to last year's presidential race. In a new book Brazile reveals the DNC struck a deal with Hillary Clinton's campaign in August 2015. It traded strategic and financial control of the committee for fund-raising and investment. In response, President Trump, Democratic Senator Elizabeth Warren and others claim the 2016 Democratic Party system was rigged. Brazile's tell-all book is called Hacks: The Inside Story of the Break-Ins and Breakdowns That Put Donald Trump in the White House. Donna Brazile is with us. Good morning.

DONNA BRAZILE: Good morning. How are you?

O’DONNELL: I'm well. Was it a fair fight between Senator Clinton and Bernie Sanders? 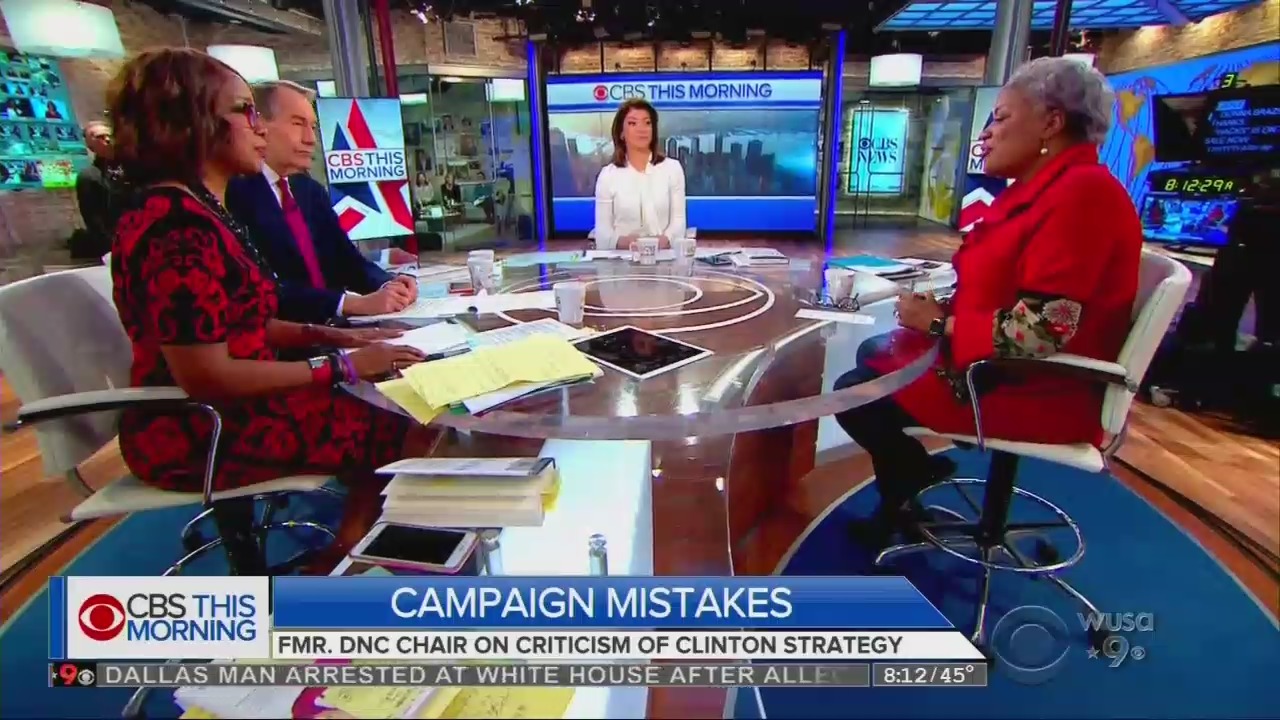 BRAZILE: I believe so. Look, we had five candidates in the race. Hillary Clinton, no question about it, ran a very strong campaign. She had resources in the states that mattered, especially the early states. She won three out of the four early states, and she went on to win more votes than Senator Sanders. but my purpose in looking into what happened was to find out if anything happened that we did not anticipate. And what I learned was there was a memorandum of understanding in addition to the joint fund-raising agreement that hampered the DNC's ability to control its communication and some of its financial investments. And I pointed that out.

O’DONNELL: That's not entirely true, Donna. What happened was that in 2015 the both Secretary Clinton and Bernie Sanders signed an agreement with the DNC, right? The DNC was deep in debt and agreed to help replenish its coffers.

BRAZILE: Norah, I was the vice chair of the party, and I had no idea there was a separate memorandum that gave one —  one candidate control over selecting staff and three or four departments. Now, it may not be illegal, but I thought —

O’DONNELL: This was a supplemental agreement that Hillary Clinton —

BRAZILE: A supplemental agreement that when I became chair, when I figured out why can't I spend money? Why can't I go out there hand make some other strategic investments? And because of this memorandum I could not. So I felt obligated, as I told Bernie I would at the convention, that I would get to the bottom of it, and I found no instances that the party rigged the process, and I wanted to make sure that Bernie and his supporters understood that.

BRAZILE: First of all, I'm a member of the democratic establishment in terms —  I'm on the rules committee. It is a fair fight. We don't set primary dates. They are set by the states. We set caucus dates.

KING: You called Bernie to tell him what?

BRAZILE: I called Bernie to tell him to explain that there was cancer that I could not destroy and I could not destroy it because of this memorandum. I had two choice to make and I think Bernie agreed with me. One was to expose it and expunge it and then disrupt the party in September of 2016 or to wait until the election was over with and to rid the party of basically allowing any candidate —  Look, Hillary Clinton did something for the party that everyone should understand. The party was broke, and she gave the party a life line of resources in order for us to compete, and that's what she did for the general election.

O’DONNELL: But now you're claiming that Hillary Clinton and her campaign treated you like Patsy the slave. Donna!

BRAZILE: No, I said I felt like Patsy the slave. First of all, I want to correct the record because I've known Gayle for a long time. She's been my editor so she's tough. but there's no question that I was upset. I was upset because we were hacked. This country was hacked by a foreign country, a hostile country.

KING: Donna, you sound like — In the book, I read the book that you were upset with Robby Mook certainly. You also sound very angry with Hillary Clinton.

KING: Yes. The hacking was an issue.

BRAZILE: My emotions are my emotions. But there’s no question that I was very upset at the time. Because, look, I'm chair of the party. I have a lot of skin in the game. I don't —  I don't report to the Democratic establishment. I report to the voters, and what I wanted the voters to understand and the people who support the Democratic Party is that our party was under attack. We had to deal with a hostile foreign government, the hacking and at the same time I had to, like most campaigns, you have family squabbles. I fought with my family.

ROSE: Are you settled on this? I have one more thing.

BRAZILE: I love these two women but they are tough.

ROSE: Of course they are. No, I want to ask you the question about the future of the Democratic Party.

ROSE: When you say that Hillary Clinton, Barack Obama and former DNC chair Debbie Wasserman Schultz stripped the party to a shell for their own purposes, what does that say?

BRAZILE: Oh, good. The Democratic Party has lost over 900 legislative seats. We lost over 50 congressional seats.

ROSE: Did they do that to their own purposes?

BRAZILE: You make strategic decisions every time you're involved in a campaign,  and if you're only targeting the 18 states and the District of Columbia that could bring you to 270 electoral votes and you're not allowing people in Louisiana or Tennessee or Nebraska to get resources, yes, I do believe that you starve the party of leadership. You starve the party resources, and that’s one of the reasons why proud to say that Tom Perez is make being a real investment in all 50 states and that's the goal to restore the Democratic Party. We have an election day to not just in New Jersey and New York City, but an election day in Virginia. These elections matter and everyone should get out and vote.

KING: Donna, you seem to be upset as DNC chair that they did not take your advice. You reached out to Robby Mook, and you said they were concentrating on analytics and data. You wanted the emotion and the energy.

KING: They did not take your advice. Isn't it up to them to decide how they want to run the
campaign?

BRAZILE: Absolutely, and I made it very clear I was chair of the Democratic National committee. I was not the campaign manager. I with a was not on their strategic calls and I did not go to the strategic meetings.

KING: But you wanted to go.

BRAZILE: No, I did not want to go. I had enough on my plate.

KING: Donna, you wanted to go.

BRAZILE: I've had enough campaign experience. I did not want to go up to the high command of Brooklyn. I wanted to be in Florida and Colorado as I said and Pennsylvania. I wanted to be where the people were. I wanted to be with the grass roots but here's what I wanted. I also wanted the candidate and her campaign to respect the Democratic National Committee. I was an officer of the DNC and I felt that my job was to protect the Democratic National Committee which meant all of the candidates, not just the presidential, but the down ballot candidates as well.

KING: Well, you open the book saying you didn't hear from Hillary Clinton until February of 2017.

KING: Okay. All I can say is you are naming names and taking numbers in this book —

KING: — and people are questioning the timing and the motive.

BRAZILE: With almost 50 years in American politics I want to tell my truth. I read Hillary's book. I loved it. This is my story. I hope people will read it, but more importantly I hope we take the threat of hacking seriously and that we will —  that we prepare for the next election.

KING: Thank you, Donna Brazile. It’s on sale now wherever you like to buy your votes.