Credulous Oliver Stone on Thug Putin: Why Would ‘Statesman’ Lie to Me?

It seems that, finally, liberal journalists are challenging the credulous, dictator-coddling filmmaking of lefty Oliver Stone. But maybe that’s because the communist-friendly director avoided tough questions when talking to Vladimir Putin about the 2016 presidential election. Appearing on CBS This Morning, Stone fawned over the Russian strong man, praising, “He believes in talk. He believes in peaceful co-existence.”

The director behind The Putin Interviews parroted Russian propaganda: “[Putin] said he wants to be our partner. He said very positive things about the United States. He talks about the partnerships.” The CBS co-hosts seemed disappointed that Stone didn’t blame the Russians for Hillary Clinton’s loss:

NORAH O'DONNELL: You sort of act as if you take what he says as fact.

OLIVER STONE: Well, I'm interviewing him. Why should he lie?  And if he is, why should he omit something? I can understand if it's a state secret.

O'DONNELL: I mean, the clip you just played, unlike many partners of ours we never interfere with the domestic affairs of countries. I mean, that's a flat out lie. 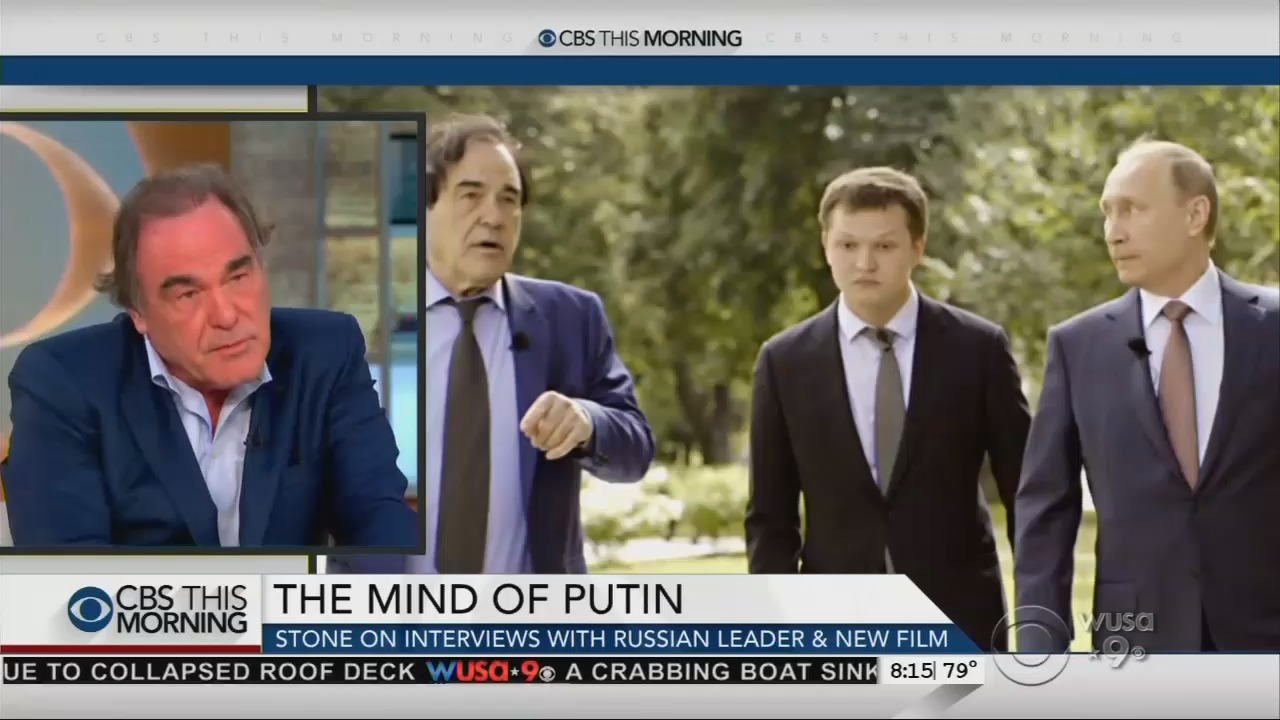 Later, Stone irritated the journalists by again not blaming Russia. He wondered, “Why would [Putin] take the position that Trump was going to be your candidate? Didn't look like he was going to win. That was quite a shock. I'm of the belief that [Clinton] did not run a very good campaign.”

In contrast, when Stone appeared on this same show in 2012 to promote his far-left documentary about the Cold War, the hosts gushed over him. Back then, Rose offered softballs such as this: “Define your own political philosophy, as we talk about your own view of America.” 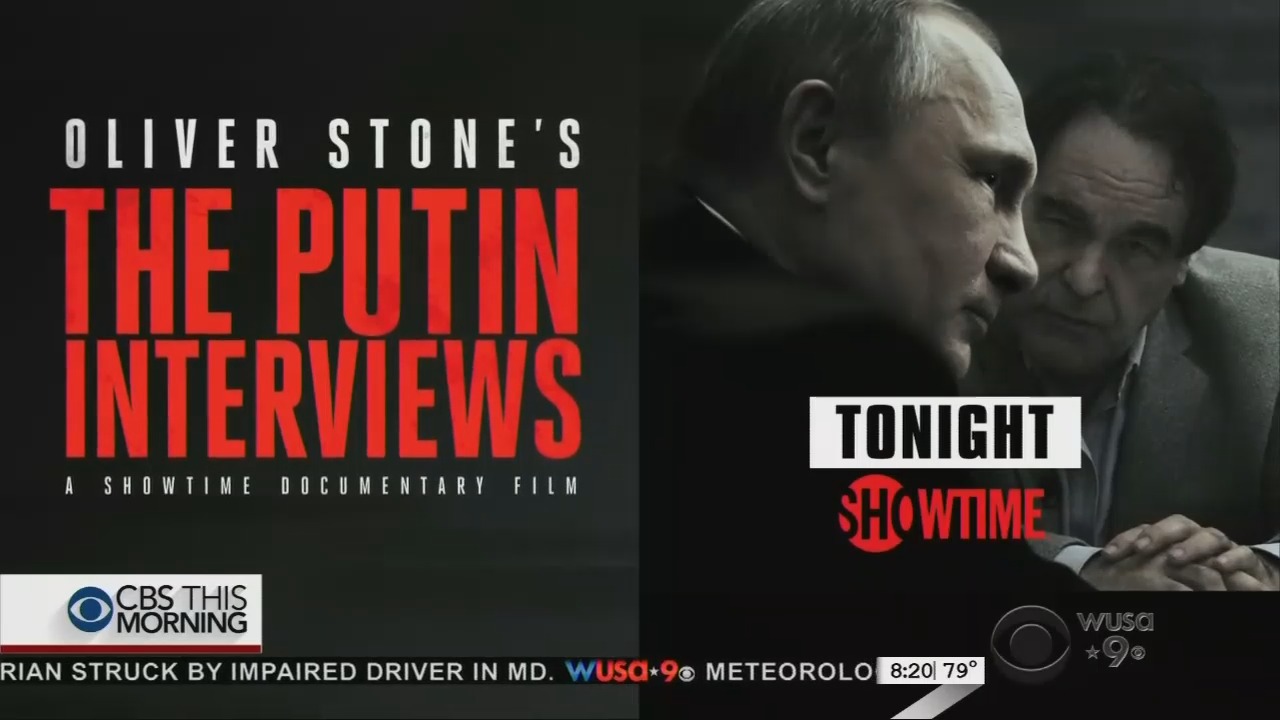 CBS wasn’t the only outlet to suddenly discover that the liberal director goes soft on dictators. In Saturday’s Washington Post, Ann Hornaday complained, “Stone never brings up Russia’s involvement in Syria, media censorship in Russia or the mysterious murders of dissidents and journalists."

Like the reporters on CBS, Hornaday appeared irritated that the filmmaker doesn’t lay the blame for Clinton’s loss at the feet of Russia. If journalists expected Oliver Stone to ask tough questions of a dictator, they will be quite disappointed. But that’s something conservatives have known for years.

Stone’s documentary will air on Showtime. It was only at the very end of the eight minute segment that Rose admitted his network’s connection in promoting the special: “The Putin Interviews premieres tonight on Showtime, a division of CBS.” 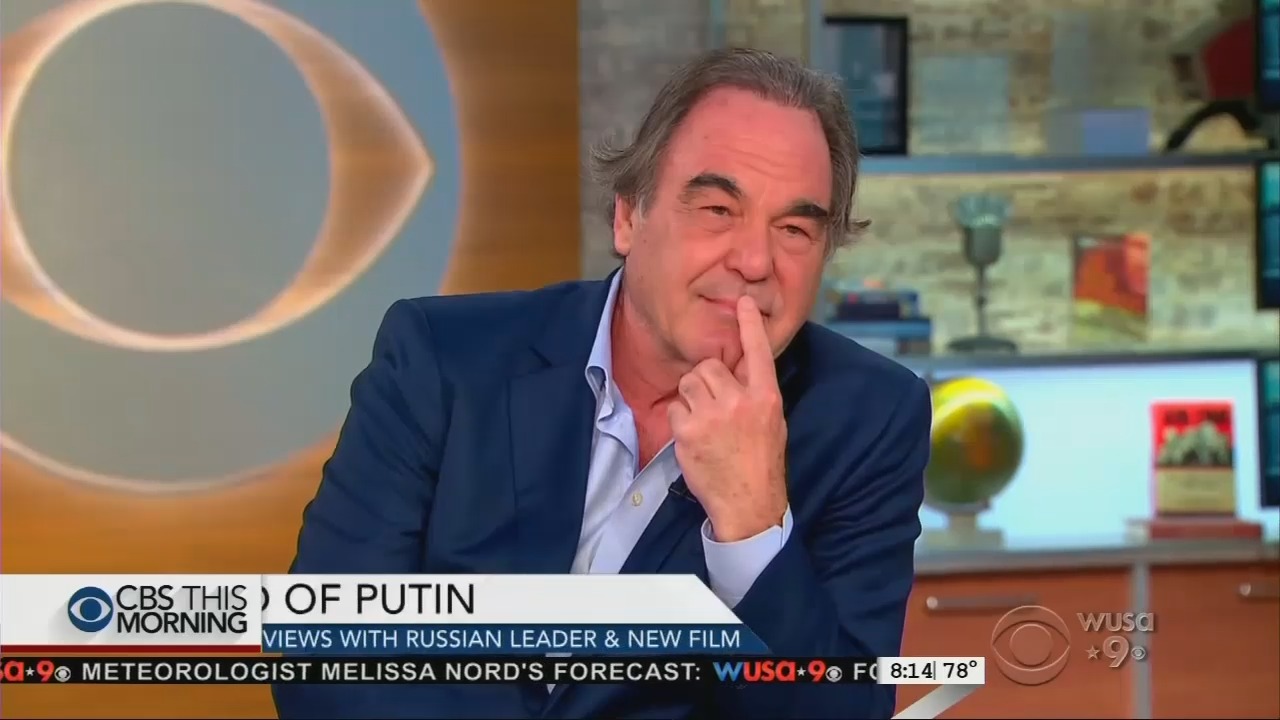 NORAH O’DONNELL: Legendary director and writer Oliver stone is known for his award-winning movies like Born on the Fourth of July, Platoon," and Midnight Express. Over his career, the filmmaker has also he's interviewed controversial figures like Hugo Chavez and Fidel Castro.

CHARLIE ROSE: For his latest documentary, The Putin Interview, Stone was granted exclusive access to the Russian president. Stone interviewed Putin more than a dozen times over two years. No topic was off limits. In a conversation from February 2016, Stone asked Putin about the candidates in the United States presidential election.

OLIVER STONE: But you do realize how powerful your answer could be if you said subtly that you preferred X candidate, he would go like that tomorrow, and if you said you didn't like Trump or something, right? What would happen? He’d win? You have that amount of power in the U.S.

VLADIMIR PUTIN [Through translator]: Unlike many partners of ours, we never interfere with the domestic affairs of other countries. That is one of the principles we stick to in our work.

ROSE: Oliver Stone is with us in his first television interview about the documentary. Good morning.

ROSE: You had an extensive opportunity to take an evaluation of Vladimir Putin. Former Secretary of Defense Robert Gates once said of him when looked at him, “I see a cold blooded killer.” When you look at him after these two years, what do you see?

STONE: You’re asking for a full understanding of somebody who I spent 20 hours filming. 20 hours of film. He reveals himself more in the film than anybody I’ve ever seen. I’d like you to be the — If you still think he’s a killer after you see these 20 minutes, a cold-blooded one and so forth, that’s fine. You draw your own conclusions.

STONE: Do I agree with Mr. Gates?

STONE: A statesman who's very concerned with Russian national interests. He's represented those same interests pretty consistently pretty consistently since about 17 years in power, and he's there to talk. He believes in talk. He believes in peaceful co-existence. He said, —  in the whole two years I never heard him bad mouth anybody. Talking about those candidates, he said very positive things about Hillary Clinton and positive things about Trump. But he never — he displayed—  He didn't care who would win. In fact, if you look at — I think you’ve seen the fourth hour, he says very clearly, “You know, I’ve had four presidents. The four presidents change, the policy remains the same.”

O’DONNELL: You sort of act as if you take what he says as fact.

STONE: Well, I'm interviewing him. Why should he lie?  And if he is, why should he omit something? I can understand if it's a state secret.

O’DONNELL: I mean, the clip you just played, unlike many partners of ours we never interfere with the domestic affairs of countries. I mean, that’s a flat out lie.

STONE: If you say so. I’m not sure. I'm not there to argue with you. I’m not there to make judgments on whether or not they hacked the election or not. It’s a complicated issue.

O’DONNELL: Why do you think he granted you such extensive access? Because you interviewed him over 20 hours.

STONE: 20 hours of film. It was quite a —  I got to know him in the Snowden movie because I was interviewing Snowden in Moscow. Went over nine times to see Snowden to get this story right. And when I was there one of those times, I actually met him. I asked him about the Snowden affair. He filled me in. He was quite brilliant about his point of view of it. One thing led to another.

KING: Back to Norah's question, Oliver, the access you had. You were in his house, he was driving you around in the car. You went to the gym with him. You sat down and you ate with him. How were you able and allowed to have such access to him?

STONE: Maybe I'm a good interviewer. Maybe people like me. It’s not easy to say.

PUTIN: Did you ask him and he said okay?

STONE: No, no. He invited us.  I think he wanted— He knew that he would be heard fairly and I'm not going to be an editor on this thing. I’m going to let him speak. And his point of view is not heard. You don't hear Russian in the west. You hear a dubbed voice. And sometimes a dubbed voice can be very harsh.

KING: He says his philosophy of life can be summed up in the philosophy of judo. That he’s taken judo since he as 11. Be flexible. Be disciplined. Is that what you found him to be?

STONE: Totally. I never saw him to be He works out every day.

STONE: He learned hockey at 62 something like that. He's playing two years later. He's a sportsman. But he's disciplined and flexible at the same time. That's what judo taught him. I never saw him lose his cool with us. I mean, a few times I pushed him. More than once. And I saw him get rattled and upset. But, you know, I have to continue this relationship. It's in my interest to encourage him to speak. So, Charlie, did one with him, too, which was very effective.

ROSE: Thank you. I asked him a number of things, including whether he was a czar? President Obama once said about him there's hardly anything ha goes on in Russia that he doesn't know about or is not responsible for.

STONE: I'm not sure about that, Charlie. Russia is a huge country with 11 time zones. There's an old saying, “The czar's ax were about to be executed.” About one third of them were. About the time it gets down to the province level and the village level, Moscow is a long way away.

ROSE: U.S. intelligence officials believe he did level. He's alluded to it. Said it might not have been the country but somebody in Russia might have done it.

ROSE: A patriot might have done it. Don't you, having talked to him, having made a measurement of the man and being in Russia have some sense, and knowing America well have some sense of whether Russia meddled in the election?

STONE: I don't know, Charlie. Why would they? Miss Clinton is way in the lead. Why would you take the position that Trump was going to be your candidate? Didn’t look like he was going to win. That was quite a shock.. I'm of the belief that she did not run a very good campaign. And there was a lot of —  on the footprints, will's a lot of confusion. The intel agency's people, that was not an estimate. That's an assessment.

O’DONNELL: Oliver, just to clarify, it is the consensus of all U.S. intelligence agencies that they attempted to meddle in the elect elections. It's not the consensus that they influenced the outcome, which I think is —

O’DONNELL: So, those are two different things. Those are two separate things. Can I ask you, though, because the Russians are involved in not only meddling in foreign but they are involved in propaganda efforts as well. Foreign Policy wrote of your documentary, “It somehow manages to both spout the Kremlin line and fall back on the laziest American cliches about Russia.” Another said you gave him a love letter to Vladimir Putin with this documentary.

STONE: Your mom used to tell you you catch more flies with honey than with vinegar. My camera was on him for around 20 hours over four visits. There's a certain behavior. It's in the eyes. It's in the body language. You see it.

O’DONNELL: I hear you.

STONE: You be the judge. If you think he’s lying—

ROSE: I think the most important thing we can say about this is, first of all, he's an interesting figure on the world stage TODAY, number one. Number two, whatever else he is, he's a strong nationalist. He believes in Russia and some say wants to have influence beyond Russia. Thank you for coming.

O’DONNELL: I do think ou give us an extended glimpse that we would not see —

STONE: We learn only from this. He said he wants to be our partner. He said very positive things about the United States. He talks about the partnerships. It's been a long time. He knows the presidents. We should listen.

STONE: Thank you for having me.

ROSE: The Putin Interviews premieres tonight on Showtime, a division of CBS.