When the journalists at CBS This Morning on Friday weren’t encouraging Caroline Kennedy to bash Donald Trump, they were busy wondering if the famous daughter of JFK would run for “president" or "mayor." Guest co-host Anthony Mason enthused, “There's been a lot of speculation about what you will do next.” Talking to the former ambassador of Japan, he quizzed, “I'm wondering, have you ever had any second thoughts about not taking the New York Senate seat in 2008 when Hillary Clinton left?”

After Kennedy demurred from any interest in politics, co-host and Democratic donor Gayle King pushed, “I'm thinking, when are you going to announce you're running for mayor, president, governor, senator? Nothing?”

Earlier, King encouraged Kennedy to attack Trump policy: “President Trump always says America First and it's always very pleasing to hear in this country. Do you ever worry there's a downside to that message for our allies to hear?” 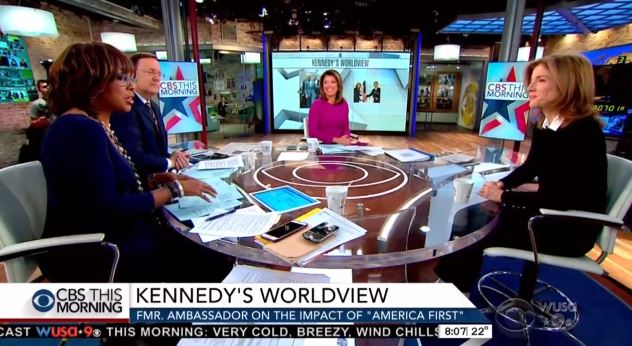 After the Democrat only mildly rebuked Trump, co-host Norah O’Donnell tried again: “But you've called that America First message alarming. Do you think that that's how our allies are seeing it as not working with them?”

On February 3, Kennedy appeared on NBC’s Today and a similar scenario played out. Matt Lauer worried, “Obviously the words that he spoke in his inaugural address, where he said...‘From this day forward it's going to be only America First’...How are those words...being greeted in foreign capitals?”

He also parroted the questions of his liberal colleagues on CBS:

It is impossible to talk to you without saying what everybody wants to know, are you
going to run for office? I mean, do you have – after serving as ambassador to Japan – do you have aspirations for elected office?

A transcript of the questions from the CBS segment is below: 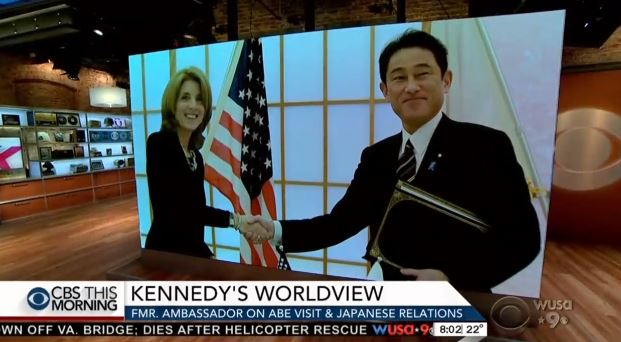 NORAH O’DONNELL: Caroline Kennedy became the first woman to serve as U.S. ambassador to Japan in 2013. Her achievements include facilitating President Obama's historic visit to Hiroshima and Prime Minister Abe’s visit to Pear Harbor. Kennedy stepped down from the role last month. She joins us at the table. Welcome back home.

CAROLINE KENNEDY: Thank you. It's get to be home.

O’DONNELL: Yeah. Great to have you on a day like this. This is a big meeting as Japan is seen as America's closest ally in Asia. We know the Prime Minister has said he thinks Trump is someone he can trust. What's the stake in this meeting? 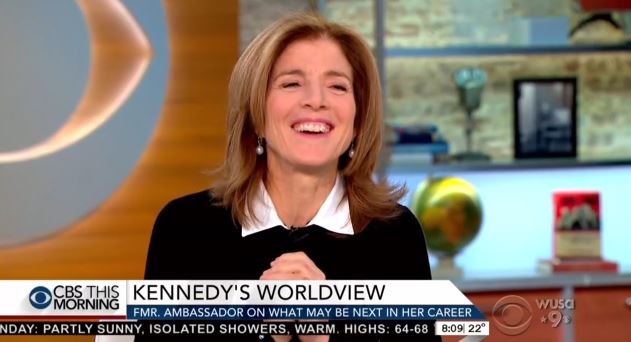 O’DONNELL: I just wanted to say, just before this meeting at the White House and them going to play golf, they have a meeting with President XI of China. What message does that send?

ANTHONY MASON: The Japanese prime minister continues to have a strong relationship with President Trump. But at the same time, he's also staked a lot of political capital on the TPP, which Trump has knocked down almost immediately. He — The Japanese Prime Minister seem to think there's still a chance he can rescue something here. Do you think that’s true?

GAYLE KING: President Trump always says America First and it's always very pleasing to hear in this country, do you ever worry there's a downside to that message for our allies to hear?

KENNEDY: Well, I think the U.S. has achieved a leadership position in the world because we have worked with others. Certainly in Asia it's allowed for tremendous economic growth and it's benefitted us as well. So I think what America First means, you know, putting our own national interest first, that's all great. Every country does that. But when it means excluding others or insulting our allies and not appreciating or working with them as partners to advance our common goals, I think that's not in our interest.

O’DONNELL: But you've called that America First message alarming. Do you think that that's how our allies are seeing it as not working with them?

O’DONNELL: Well, I think, yeah. I think they have serious questions. I think the phone call with Australia is alarming to countries in the region who have been by our side all the way along. Same with Japan. I think they're all trying to figure out what this means going forward.

KING: Let's talk about you, Caroline Kennedy, for a second. Back to Norah's question, welcome back home. We all remember, I remember, Norah, when you did the 60 Minutes piece and you had very little diplomatic experience but you're getting two thumbs up as you’re leaving, as you have left. What did you get out of that experience? What did you learn? Your favorite son is here. He spent a year with you in Japan. What are you most proud of when you look back at that?

KENNEDY: Well, I think —  this may sound cliche but I really learned the most about America. I mean I learned a tremendous amount about Japan and it's really fascinating but really how Asia and Japan see our country. I think that made me so proud, our leadership, our values, our commitment to rule and democracy, and I think that's what the whole world sees in us. I think our economy is the leader, and I they you just can't, you know, overstate how much Asia wants us to be there and want our leadership.

O’DONNELL: How big a threat is China militarily?

MASON: There's been a lot of speculation about what you will do next. You said, “I just got back, I got to think about it.” But I’m wondering, have you ever had any second thoughts about not taking the New York Senate seat in 2008 when Hillary Clinton left?

KENNEDY: The experience in Japan was really something I obviously couldn’t have predicted and it turns out to be really a great privilege. So, I'm so glad everything worked out the way it did.

MASON: Any interest in politics?

KING: Okay, but that’s not an answer to that question.

KENNEDY: Oh, no. The answer would be no.

KING: Last time you were here, you wrote, "See you in Tokyo," which was a little bit of a hint. So, I’m thinking, when are you going to announce you're running for mayor, president, governor, senator? Nothing?

KENNEDY: I don't know. I'll have to wait and see what I write on the board.