Minutes after Donald Trump selected Judge Neil Gorsuch for the Supreme Court, CBS on Tuesday labeled him a “predictable conservative” with “some controversial decisions.” NBC and ABC also deemed Gorsuch a “conservative.” In contrast, the networks in 2016 rushed to declare Barack Obama’s attempted replacement, Merrick Garland, a “moderate.” In the first 24 hours of that pick, ABC and NBC avoided the “liberal” label while CBS used the word just twice.

However, CBS’s Jan Crawford on January 31, 2017 declared, “[Gorsuch has] been a solid, predictable conservative judge, whose philosophy, his judicial philosophy, is very much modeled after Justice Scalia.” She noted, “We've seen some controversial decisions that you're going to hear about. He sided with religious employers in a case over the ObamaCare contraceptive mandate.”

CBS Evening News anchor Scott Pelley also used ideological labels and some questionable math. Pelley insisted, “He is a conservative judge, which will leave the Court essentially where it was before the death of Antonin Scalia, with four conservatives, three liberals, and two that justices that are considered moderate.” 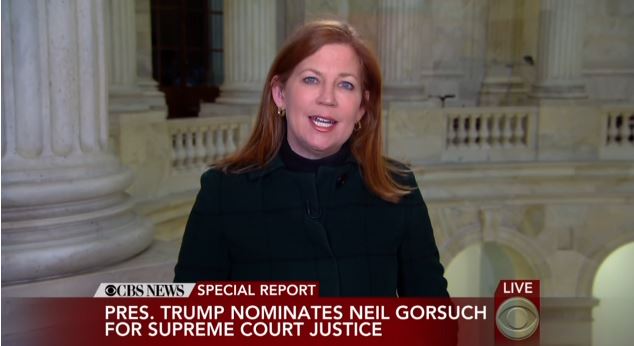 Nancy Cordes recounted the immediate reaction from both sides: “Already tonight, the Democratic National Committee has put out a statement calling him a ‘right-wing ideologue.’ But I can tell you, Scott, conservatives universally are delighted with this pick.” 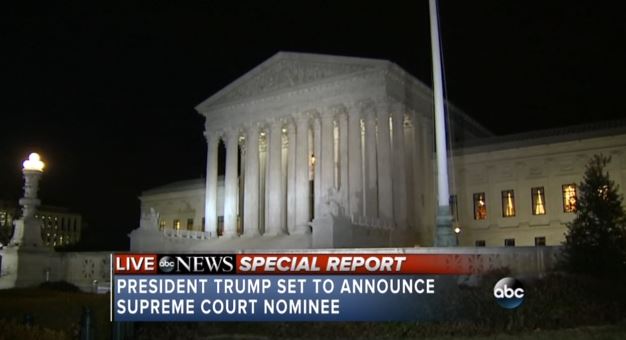 Over on NBC, Pete Williams explained, “You lose a conservative on the Court and you substitute another conservative. So it won't change the direction of the Court overall.” Chuck Todd praised, “I think he is going to make a very good one-on-one first impression with a lot of these Democratic senators. I think this is going to be much harder for them to unify and be against and enforce a filibuster after he spends one-on-one time with them.”

On ABC, George Stephanopoulos compared, “A lot of scholars look at his opinions and say he is just like Scalia, just a generation younger.” Terry Moran agreed, “Promise kept in this case for President Trump.” An on-screen ABC graphic placed Gorsuch in the “lean conservative” camp.

A transcript of the CBS coverage is below: 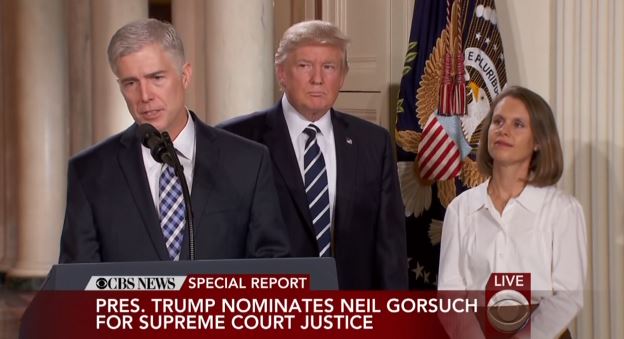 SCOTT PELLEY: 49-year-old, Tenth Circuit Appeals Court judge Neil Gorsuch, and his wife, Louise, introduced to the nation by President Trump just a few moments ago. When Judge Gorsuch was being quizzed by the Senate for his current job on the Tenth Circuit Court of Appeals, he told the senators, "My personal views have nothing to do with the case before me. The litigants deserve better than that. The law demands more than that." He is a conservative judge, which will leave the Court essentially where it was before the death of Antonin Scalia, with four conservatives, three liberals, and two that justices that are considered moderate. Major Garrett is in the East Room of the White House where the announcement was just made. Major.

MAJOR GARRETT: Scott, in the second row here in the East Room, Senate Majority Leader Mitch McConnell. And are for him, this is the culmination of one of the most audacious political gambits in the history of American jurisprudence, politics and the Supreme Court. Because it was Mitch McConnell who said to Senate Republicans during last campaign, "We are not going to move forward on then-President Obama's nominee to replace Antonin Scalia. We are going to delay that process and bet that our nominee, whom ever it is, will win, and then make the pick to put a conservative in the Scalia seat on the Supreme Court." That audacious gamble has paid off, and you saw it in the full force of Neil Gorsuch tonight here in the East Room, a conservative in the, let us say, long line of scholarly conservative jurists, like Antonin Scalia. And President Trump is putting him before the United States Senate to fill Scalia's seat. And he said during the campaign, and I saw this at countless rallies across the country, “The Supreme Court is important. If you consider the Supreme Court important, vote for me. Put me in the presidency, and I will deliver for you voters a conservative nominee to the Scalia seat on the Supreme Court bench.” That is exactly what happened. It was audacious politics then. It is culminated here tonight in the East Room.

PELLEY: Major Garrett in the East Room for us tonight. So let's go to Nancy Cordes next, who covers Capitol Hill for us. Nancy, the average wait for a justice before he gets his confirmation hearing is around 50 or 60 days. Do you think that the appointment or the nomination of Judge Gorsuch will be expedited? What is he facing on the hill?

NANCY CORDES: Well, Democrats are nursing some pretty serious wounds, Scott. They had to wait and watch for 11 months while President Obama's pick for the Supreme Court basically dangled there. And as Major pointed out, was blocked by Republicans. So they are in no mood nationwide allow this confirmation process to go by swiftly. They haven't said how long they plan to hold it up. We've asked them repeatedly. Is it weeks? Is it months? Is it a year? They're retaining all their oppositions and they said they would wait to see who the pick was. Would it be someone who was within the mainstream of legal thought? Already tonight, the Democratic National Committee has put out a statement calling him a “right-wing ideologue. But I can tell you, Scott, conservatives universally are delighted with this pick. And it makes some of the more unorthodox statements and actions from Donald Trump that have really made Republicans nervous up here for the past couple weeks, it kind of makes all of that pay off because there is almost nothing more important to Republicans or Democrats on Capitol Hill than the choice for another member of the Supreme Court.

PELLEY: Nancy Cordes, Judge Gorsuch a moment ago mentioned his faith, and that will be another change for the Court. All of the members of the court currently are either Catholic or Jewish. But Judge Gorsuch and a Protestant, an Episcopalian. Let's go to John Dickerson on the set of Face the Nation in Washington for us. John, what's at stake for the Trump administration with this nomination?

JOHN DICKERSON: Well, what was at stake, the biggest prize for conservatives, and I was talking to a Republican just before this announcement who said, “You know, there have been some concern about whether Donald Trump is listening to his allies in Washington. But on this question, he listened.” He's picked somebody who conservatives really like, and this sends a big signal to them on the most important things that conservatives care about. Why? Because of control of the Court. There will be a  conservative majority. Of course not on every issue. But by and large. But also that Judge Gorsuch will be there for a long time, long after Donald Trump leaves the presidency. So that's why that is so important. And going back to Major's point about Mitch McConnell on the night that Antonin Scalia passed away or that it was announced, Donald Trump was at a debate, and what he said about this was, "I think it's up to Mitch McConnell and everybody else to stop it." Meaning Barack Obama's nominee. And he said, “It's called, delay, delay, delay.” Well, he got his wish.

PELLEY: John Dickerson, thank you. One thing that won't change on the Court, all of the current members attended law school at Harvard or Yale. Gorsuch attended school at Harvard. And so for those of you keeping score, it's now Harvard six, Yale three. Let me go to Jan Crawford for just a moment. What do we know about Gorsuch's history on the bench?

JAN CRAWFORD: Well, he's been a solid, predictable conservative judge, whose philosophy, his judicial philosophy, is very much modeled after Justice Scalia and a method of restraint. We've seen some controversial decisions that you're going to hear about. He sided with religious employers in a case over the ObamaCare contraceptive mandate. He's also written a book on euthanasia in which he argues for the sanctity of life. But you saw President Trump kind of outline the case for Judge Gorsuch and his academic credentials which are stellar. His track record academically, his reputation as a judge, being a careful writer, a thoughtful person, and a very reflective jurist on the bench. He is someone who has believed to be without the sharp elbows and blunt manner of Justice Scalia, which sometimes hurt Justice Scalia because it made it difficult difficult for him to build coalitions. They do not believe that Judge Gorsuch will have that problem. He is considered a very congenial colleague which will help build those kind of important coalitions which are crucial of course because the Supreme Court can't do anything without five votes. This is in many ways a very traditional pick. But, remember, we have not had- and when you think about the fight ahead, which will shift here to Capitol Hill first thing in the morning—  we've not had an election-year vacancy in 100 years. And Democrats in some ways have laid the groundwork for this fight with some of their past decisions.