CBS This Morning co-host Charlie Rose again reported from Cuba on Tuesday, trumpeting the “legacy” of the “thunderous” Fidel Castro and the “anguish” over his death. Aside from one passing mention about the dictator’s violence, the focus was entirely on praise for Castro. Talking to one person, Rose recounted, “Many were overcome, either by the heat or by grief. ‘He is living eternally now,’ this man said.”

The journalist uncritically added, “Mourners stood hours in the sun for the chance to file past a photo of the man known as El Commandante and view his medals.” Breezing past dissidents, Rose noted, “Around the world, Castro is seen by some as a murderous and repressive dictator. But to these Cubans, he is a father figure and a national hero.”

The co-host nostalgically reported live from Revolution Square, reminiscing, “During the nearly 50-year reign of Fidel Castro, massive crowds came to this plaza to hear his thunderous speeches.” 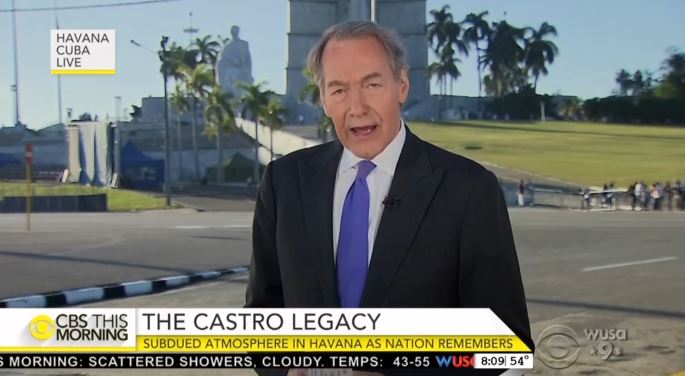 For Rose’s trip, the emphasis, clearly, has been on Castro’s positive qualities. On Monday, he hyped the “revolutionary hero” and asked people in Havana, “What was the best thing he did for the Cuban people?”

On both days, Rose did not mention the estimated seven to ten thousand people Castro killed.

In the wake of his death, the Media Research Center’s Rich Noyes looked at the decades of flattery offered up by American journalists towards the Communist. 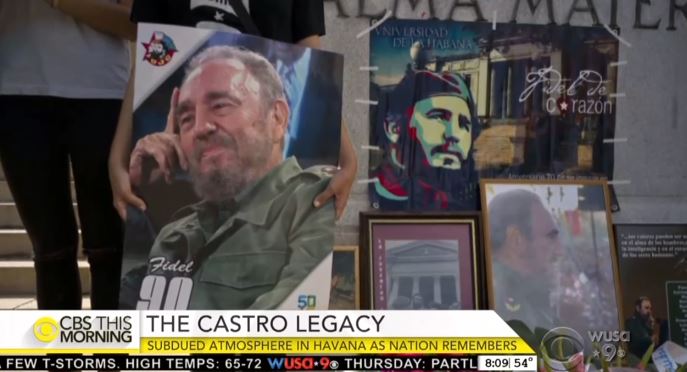 JEFF GLOR: World leaders are arriving in Havana ahead of tonight's rally to honor Fidel Castro. Spain's former king, the president of Mexico, South Africa, Nicaragua, Equador, Columbia and Venezuela all plan to attend Castro’s funeral on Sunday. Notably absent Russian President Vladimir Putin, Canadian Prime Minister Justin Trudeau, as well as President Obama and Vice President Biden. The White House is still deciding whether to send an official delegation. Charlie Rose is at Revolution Square in Havana where Cubans are lining up to pay their respects. Charlie, good morning to you.

CHARLIE ROSE: Good morning from Havana. During the nearly 50-year reign of Fidel Castro, massive crowds came to this plaza to hear his thunderous speeches. Yesterday, hundreds of thousands came to bid farewell. Today, even bigger crowds are expected. In fact, behind me, they are already beginning to line up. Hundreds of mourners remain well after the sun set on Revolution Square. Fidel's brother and Cuba's President Raul Castro placed a flower behind his picture. Several other Cuban officials to the man who led the country for nearly 50 years. The lines of mourners Monday grew longer as the day wore on.

Many were overcome, either by the heat or by grief. “He is living eternally now,” this man said. Mourners stood hours in the sun for the chance to file past a photo of the man known as El Commandante and view his medals. The moment may have lasted only seconds, but the anguish was evident. “I tell you this from my heart,” this farmer said. “I'd like it have been me instead of him.” Castro’s ashes were kept at public view, even in death, he is surrounded by secrecy. Alcohol sales and celebratory music are banned during this mourning period. Schools and government offices have been shuttered. Many mourners, who also signed an oath of loyalties to Castro's revolution are state employees or students. Around the world, Castro is seen by some as a murderous and repressive dictator. But to these Cubans, he is a father figure and a national hero. Tomorrow's rally —  tonight's rally, in fact, will be a kind of massive sendoff for Fidel Castro. His remains will travel all the way to Santiago. Along the way, he will stop, and people will have an opportunity to bid him farewell. He will be then at the birth place of the Cuban revolution. Gayle.