ABC and NBC on Wednesday and Thursday ignored the highly suspicious news that Bill Clinton had a secret meeting earlier in the week with Attorney General Loretta Lynch. This as the Justice Department and the FBI are investigating Hillary Clinton’s private e-mail server. Only CBS bothered to cover the story.

To the credit of the journalists at CBS This Morning, they led the show with what would seem to be big news. At times, however, there was a credulous tone to the reporting. Co-host Charlie Rose assured, “Attorney General Loretta Lynch met privately this week with former President Bill Clinton at a Phoenix airport. Lynch says there was no discussion about the FBI probe.”

Co-host Norah O'Donnell introduced a full report by parroting, “Nancy Cordes looks at the meeting that aides say was an unplanned coincidence.” Cordes added, “That meeting took place as President Bill Clinton was leaving that Phoenix airport and Lynch arriving. She says they did not discuss the e-mail investigation.” 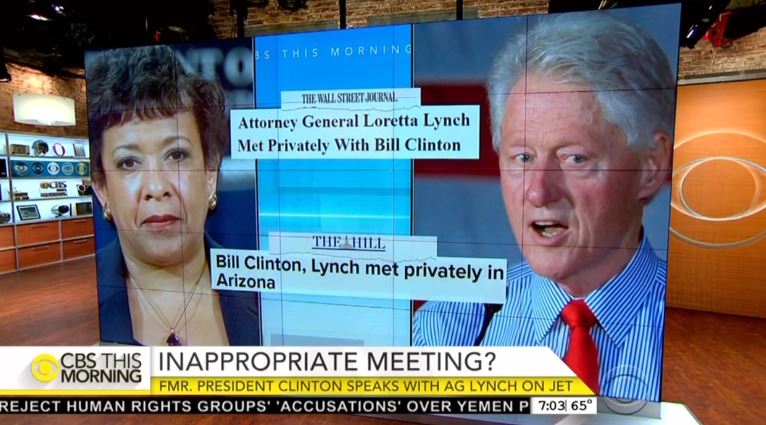 Eventually, Cordes got around to skepticism:

NANCY CORDES: But even the impression of favoritism could hurt Lynch as her department investigates Hillary Clinton's use of a private server as Secretary of State. Some Republicans have called for the appointment of a special proper. It even came up at Lynch's confirmation hearing.

Later on the show, co-host Gayle King assured viewers that the secretive meeting was totally innocent. In addition to CBS This Morning, the network also covered the story on Wednesday’s Evening News. Guest anchor Josh Elliott offered a quick news brief: “Lynch says the two did not discuss the investigation.”

However, at least CBS covered the story. The NBC Nightly News and Today show both skipped it. This is despite four and a half hours of total air time. ABC’s World News Tonight and Good Morning America both did the same.

What happened to the supposed rough skepticism of journalists? 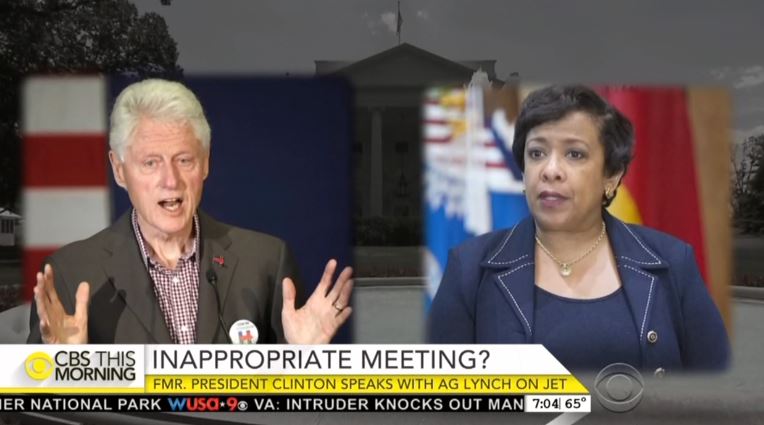 NORAH O’DONNELL: They met just before the House Benghazi committee released its report on the deadly 2012 terror attack in Libya. Nancy Cordes looks at the meeting that aides say was an unplanned coincidence. Nancy good morning.

NANCY CORDES: Good morning. That meeting took place as President Bill Clinton was leaving that Phoenix airport and Lynch arriving. She says they did not discuss the e-mail investigation. But it is providing new fodder for Republicans who argue that her Justice Department can't be impartial.

LORETTA LYNCH: I did see the President at the Phoenix airport the other night as I was landing. He was heading out.

CORDES: The encounter between the attorney and the former president was initiated by him, and reportedly lasted about half an hour on her plane on the tarmac.

LYNCH: He did come over and say hello and speak to my husband and myself and talk about his grandchildren and his travels, and things like that. So that was the extent of that.

CORDES: An aide to President Clinton told CBS News saying hello to a cabinet secretary or other dignitaries is a courtesy the former president always extends. But even the impression of favoritism could hurt Lynch as her department investigates Hillary Clinton’s use of a private server as Secretary of State. Some Republicans have called for the appointment of a special prosecutor. It even came up at Lynch's confirmation hearing.

SENATOR LINDSEY GRAHAM: Have you ever discussed the Clinton e-mail investigation with president Obama or anyone at the White House?

GRAHAM: Do you anticipate that happening?

GRAHAM: Lynch insisted Wednesday the probe will be fair.

LYNCH: It's being handled by career investigators and career agents who always follow the facts and the law.

CORDES: The encounter comes the same week that another 165 pages of Clinton's e-mails were released as part of a separate court case. Some of which Clinton failed to hand over to the State Department last year. In one e-mail from 2009, Clinton tells her top aide Huma Abedin she is concerned about her personal and official files saying, quote, “I think we need to get on this ASAP to be sure we know and design the system we want.” What did she mean by that? Abedin told lawyers under oath on Monday, “I would imagine anybody who has a personal e-mail doesn't want that personal e-mail to be read by anybody else.” That deposition was part of a lawsuit filed by a conservative legal group that alleges Clinton set up her private e-mail account to evade federal records requirements. The Clinton campaign has not had any comment on the meeting at the Phoenix airport beyond saying, Gayle, that they agreed with lynch's version of events.