Sneering NYT: ‘Fear That Brexit Has Given License to Xenophobia’ 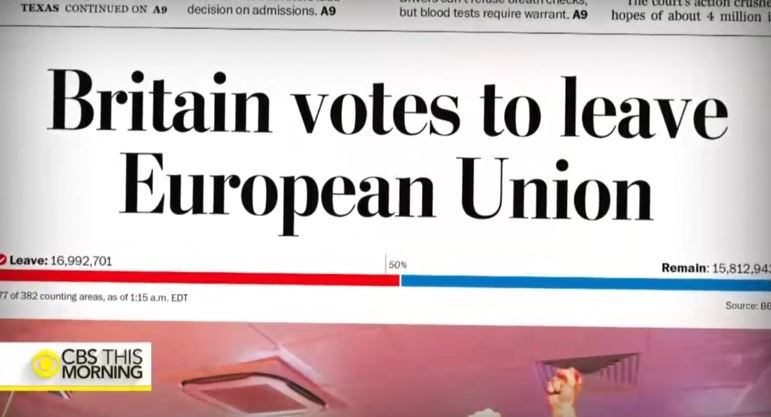 Sneering New York Times writer Dan Bilefsky on Tuesday tarred Brexit voters as inciting bigotry and “xenophobia.” This is despite the fact that in paragraph five, the journalist conceded that “police in at least two major cities said they had not recorded an increase in hate crimes after the vote.”

Not letting facts get in his way, Bilefsky hyperventilated, “Less than a week after a referendum on British membership in the European Union, which galvanized fears about untrammeled immigration into the country, human rights advocates and leading politicians expressed alarm that the vote had given license to xenophobia, unleashing hatred among an economic underclass.”

The online version included this screaming headline: “As Migrants Face Abuse, Fear That ‘Brexit’ Has Given License to Xenophobia."

Bilefsky went on to link the current perceived bigotry to hate from another conservative era:

For some, the racist taunts of the past few days recalled a time when jackbooted members of the far-right National Front taunted immigrants on the streets of Britain in the 1980s, during the painful deindustrialization of the Thatcher era.

Without actual statistics or examples of hate, the Times writer took to Twitter for proof:

Others took to Twitter to convey their shock. Jamie Pohotsky, a screenwriter from Boston, wrote on Twitter: “Table next to me says to Polish waitress ‘How come you’re so cheerful? You’re going home.’ Him and the missus started laughing. Disgusting.”

Bilefsky included a quote from Suresh Grover, the director of a human rights organization called Monitoring Group, to worry that “Britain was entering a new era of intolerance.”

On Saturday, the Times expressed horror at what a majority of British voters did: “Many young Britons expressed astonishment, anger or despair that their parents and grandparents would seek to limit the travel, exposure to other cultures and opportunities to work and study abroad that being part of the European Union has afforded them.”

On Sunday, the paper included an opinion piece that “Hell is other Britons.”