Posted below: the March 7 edition of Notable Quotables, MRC’s bi-weekly compilation of the latest outrageous quotes in the liberal media. This issue: MSNBC host Chris Matthews says the GOP's "number one goal is to keep blacks from voting," while journalists debate whether Donald Trump more resembles an American Adolf Hitler or a "right-wing" talk radio host.

Meanwhile, NBC anchor Lester Holt is already getting tingles up his leg about the prospect of "the first female President;" Disney boss Robert Iger insists that George Stephanopoulos is "fair and unbiased;" and an NPR reporter gushes that being kissed by Fidel Castro's brother is "kind of like getting the blessing of the Holy Trinity." The issue, with 21 quotes, two with video, is posted below.

GOP’s “Number One Goal” Is “Keep Blacks from Voting”

“His number one goal is to keep blacks from voting....All we hear is voter suppression. That’s all we hear.”
— MSNBC host Chris Matthews discussing RNC Chairman Reince Priebus on Hardball, February 24.

“When it comes to national security, and the threat of terrorism, why does Mexico need a wall, and Canada doesn’t? Isn’t that, like, closing the front door, and leaving the back door open?”
— Telemundo’s Maria Celeste Arraras to Donald Trump at the CNN debate, February 25.

“Here’s my take. A key sign of the Republican Party’s dysfunction in recent years has been unwillingness to produce serious proposals. Instead, its leading lights routinely present outlandish plans that they well know can never be enacted or in which the math simply doesn’t add up....Now, while not blameless, the Democrats since Bill Clinton have by and large avoided this path. They buttress their policy with real research by reputable scholars. If they make some rosy assumptions, they tend to be in the bounds of reason.”
— CNN’s Fareed Zakaria in a February 21 commentary for Fareed Zakaria GPS.

“Like any number of us raised in the late 20th century, I have spent my life perplexed about exactly how Hitler could have come to power in Germany. Watching Donald Trump’s rise, I now understand. Leave aside whether a direct comparison of Trump to Hitler is accurate. That is not my point. My point rather is about how a demagogic opportunist can exploit a divided country.”
— Contributing columnist Danielle Allen writing at WashingtonPost.com, February 21.

“If they’re [Democrats] not motivated to vote for, you know, the guy with the progressive economic message that really would finally make this country work for everyone, or the woman who’s running with the impeccable and vast record of experience, if that’s not enough for people, at least stopping us from being Nazi Germany would hopefully get Democrats and others to turn out.”
— Daily Beast contributor Sally Kohn on CNN’s New Day, March 3.

...or Even Worse: Rush Limbaugh

“It’s been 25 years of Rush Limbaugh radio and the other shows that he has spawned that Donald Trump now personifies. This [Trump] is Rush Limbaugh running for president with exactly the same style of humor. They joke about the same kind of things. They make fun of people in the same way with exactly the same level of accuracy, which is to say wild inaccuracy all the time, without ever being held by the audience, in Rush’s case, by Trump’s supporters and voters in his case, for being wrong and for being proven wrong about things every day. This is right-wing talk radio come to a candidacy.”
— MSNBC’s Lawrence O’Donnell during live coverage of the Nevada caucuses, February 23. 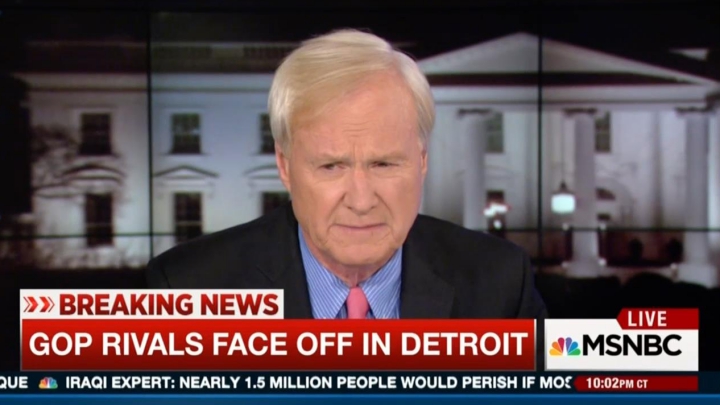 “On immigration, Trump was challenged to release an off-the-record conversation he had with the ed board of The New York Times. He refused. Cruz suggested he was lying to the American people, of course, because Cruz always says things like that without any foundation....That was Joe McCarthy at his worst in the form of Ted Cruz, tonight....If you want to know what Joe McCarthy was like in the early 1950s, watch Cruz, because his tactics are the same.”
— MSNBC’s Chris Matthews during a post-GOP debate edition of Hardball, March 3.

“They invited evil in and now evil is taking over, Okay. 2009, the night of Obama’s inauguration, ‘We will stop him at every turn.’ They loved the Tea Party anger. They took advantage of it in ’10 and ’12 — ’14. They always said, ‘We can control it. We can harness it.’ Now, all of a sudden, Trump is taking advantage of it.”
— Columnist and TV One anchor Roland Martin talking about Trump’s candidacy on ABC’s This Week, February 21.

“With regard to Sanders, I don’t think he’s saying he has more enthusiasm than Barack Obama did in 2008. There was more enthusiasm for Barack Obama in 2008 than for any human ever born, except maybe Elvis and Michael Jackson. I don’t think he’s comparing himself to that. I think he’s comparing himself to Hillary Clinton.”
— CNN analyst Van Jones during live Super Tuesday election coverage, March 1.

“Eight years ago, we were talking about, ‘Wow, we may see the first African-American president.’ After tonight, will people begin to talk in terms of, ‘Wow, we might see the first female president?’”
— Nightly News anchor Lester Holt during NBC’s live Super Tuesday coverage, March 1.

Co-host Norah O’Donnell: “[Hillary] Clinton also heard Stephen Colbert react to a CBS News interview where Scott Pelley asked Clinton if she had ever lied....Have you ever told a lie?”
Co-host Gayle King: “Yes.”
O’Donnell: “Yes. Have you?”
Co-host Charlie Rose: “Yes.”
O’Donnell: “Yeah, so have I.”
— Exchange on CBS This Morning after a story on Clinton’s honesty, February 24.

“I was talking to a former Democratic Governor of Michigan who said, remember those Reagan Democrats? And I said might they respond to Bernie Sanders in his blue-collar appeal, his working class appeal, income inequality, and they — he said, no, because you have to register to vote in Michigan, but on the day of the primary, you can choose your party and they are going to be Trump voters. He said, ‘The Reagan Democrats, many of them were George Wallace Democrats.’ And that there is an undercurrent of race in a lot of what we have been hearing on the campaign, the protest vote and that could be part of it as well.”
— MSNBC’s Andrea Mitchell during live coverage of the South Carolina Democratic primary, February 27.

ABC: Obama in Cuba Is Bigger than Beyonce, Elton John

“Major League Baseball is planning a preseason game there [in Cuba]. Big entertainment names like Beyonce, Elton John, and the Rolling Stones are negotiating huge concerts. But the biggest attraction is likely to be Obama, who may be the most popular politician on the island, bigger than either Castro brother, since diplomatic relations were restored between the two countries.”
— ABC’s Jim Avila on Good Morning America, discussing President Obama’s upcoming visit to Cuba, February 18.

Kissing Castro Brother Like “Blessing of the Holy Trinity”

Don’t Worry: George Is Fair Because We Say He Is

“We believe that George is presenting to his public a fair and unbiased look at news....He seems to be equally aggressive in terms of looking for criticism, looking for applause, demanding facts and opinions from all of them [the candidates]. I assure you, if we felt George was not presenting it fairly or were biased, he would not be on our air.”
— Disney CEO Bob Iger at a March 3 shareholders meeting, in response to a question posed by the National Center for Public Policy Research’s Justin Danhof about Stephanopoulos’s past contributions to the Clinton Foundation and work on Bill Clinton’s 1992 presidential campaign.

Co-host Lara Spencer: “Leo with his sixth Oscar nomination finally having his moment taking home Best Actor and using it as a platform for global change.” ...
Co-host Robin Roberts: “Both of your speeches were just outstanding.”
Leonardo DiCaprio: “Thank you....It is the most urgent crisis that we’ve ever faced as a civilization. We can actually tackle this problem. We just have to have the political will.”
— Discussion of the Academy Awards on ABC’s Good Morning America, February 29.

“Richard Cheney cares less about American democracy than he cares who he shoots in the face. And this has been true since he first crawled out of the primordial authoritarian soup. He would have been the perfect Hauptfuhrer, the ideal Politburo conniver. He’d have risen high in the Stasi, and Pinochet would have had him over for Scotch and electrodes at least twice a week.”
— Charles Pierce writing in an Esquire.com post about Cheney’s time in the Ford administration, February 29. 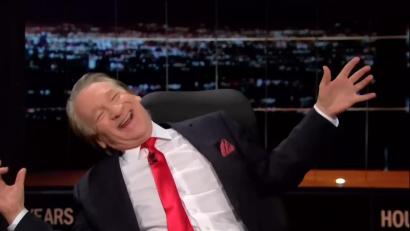 “So, look, you’re not supposed to speak ill of the dead, so let me not name call. But let me fact call because I have listened for two weeks about he was a brilliant jurist and he was a great intellectual. Excuse me, Antonin Scalia was put on Earth to remind poor people that the law is not your friend.”
— HBO’s Bill Maher on Real Time With Bill Maher, February 26.

“The Clintons have been beat down ever since way back. So she’s just going along with that legacy that she’s inherited over the amount of time she’s been in politics, which is a long time. This is — I think this is just made-up stuff, just, you know, it’s political hogwash.”
— Actor Morgan Freeman discussing Hillary Clinton on the February 19 CNN Tonight.

“In South Carolina, Jesus slid on over and let racism take the wheel with three-quarters of primary voters agreeing that Muslims should be banned....Aww, look at that. [Motions to circular-shaped chart of exit poll results.] It’s like a NuvaRing of bigotry.”
— Host Samantha Bee on TBS's Full Frontal, February 22, discussing the Republican presidential primaries.

“Core” of GOP Is the Ku Klux Klan

“If the Republican Party is a gumbo — the modern Republican Party — the roux of that gumbo is white supremacy, and the core of that is the Ku Klux Klan.”
— W. Kamau Bell, comedian and host of CNN’s United Shades of America, on CNN Tonight, March 2.