If you like your jail cell plan, you can keep it? In a front page story for Monday's New York Times, writer Erica Goode revealed that prisons all across the country are enrolling inmates to ObamaCare. Despite the fact that many media outlets consider the Times to be the "paper of record," NBC and ABC ignored the news that taxpayer-funded money would be going to the health care of convicted criminals.

Only CBS This Morning covered it, allowing 20 seconds. Guest co-host Anthony Mason summarized the details and insisted, "States can save millions by letting Medicaid pay for prisoners' hospital stays lasting more than 24 hours. Up to 35 percent of those now eligible for Medicaid under ObamaCare have had run-ins with the law."  [See video below. MP3 audio here.] Although CBS covered the latest revelation, Mason failed to mention conservative criticism.

In a little-noticed outcome of President Obama’s Affordable Care Act, jails and prisons around the country are beginning to sign up inmates for health insurance under the law, taking advantage of the expansion of Medicaid that allows states to extend coverage to single and childless adults — a major part of the prison population.

Unlike CBS, Goode pointed out:

Opponents of the Affordable Care Act say that expanding Medicaid has further burdened an already overburdened program, and that allowing enrollment of inmates only worsens the problem. They also contend that while shifting inmate health care costs to the federal government may help states’ budgets, it will deepen the federal deficit. And they assert that allowing newly released inmates to receive Medicaid could present new public relations problems for the Affordable Care Act.

“There can be little doubt that it would be controversial if it was widely understood that a substantial proportion of the Medicaid expansion that taxpayers are funding would be directed toward convicted criminals,” said Avik Roy, a senior fellow at the Manhattan Institute, a conservative policy group. 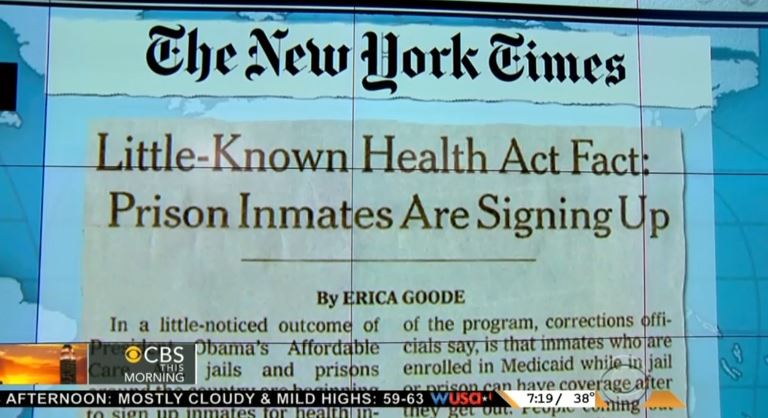 Health care experts estimate that up to 35 percent of those newly eligible for Medicaid under Mr. Obama’s health care law are people with histories of criminal justice system involvement, including jail and prison inmates and those on parole or probation.

What important topics did NBC and ABC cover instead? The Today show spent five minutes and 15 seconds on "how to keep your pet looking and feeling their best." Good Morning America devoted three and a half minutes to Denzel Washington's debut on Broadway.

A transcript of the March 10 CBS This Morning brief is below:

ANTHONY MASON: The New York Times says jails and prisons round the country are enrolling inmates for health insurance under the Affordable Care Act. States can save millions by letting Medicaid pay for prisoners' hospital stays lasting more than 24 hours. Up to 35 percent of those now eligible for Medicaid under ObamaCare have had run-ins with the law.