Liberal anchor Chris Matthews on Friday stooped to new low, smearing John McCain as an "angry" Vietnam veteran who is having a "flashback." Resorting to the cheapest of stereotypes, the Hardball host attempted to explain why McCain so aggressively opposed Chuck Hagel's nomination to be Secretary of Defense.

Matthews opened the show by sneering, "Why is John McCain so angry? Forty years after the Vietnam POWs came home, the most famous of them is angrier than ever." Regarding Thursday's congressional hearings, the journalist asserted that Vietnam "flashbacks must haunt still the mind and heart of John Sidney McCain." Dredging up the cliches of the unstable Vietnam veteran, Matthews declared, "...But I'm absolutely convinced we're watching a flashback." [See video below. MP3 audio here.]

Talking to liberal guests Joy Reid and David Corn, Matthews impunged the motives of McCain's questioning: "It looks like a flashback. McCain is so angry. Is it really about the surge?"

Considering how Matthews rails against the birther movement, it's shocking that he would turn around and engage in such cheap, paranoid attacks on a Vietnam veteran.

A transcript of the February 1 segment, which aired at 5:01pm EST, follows. 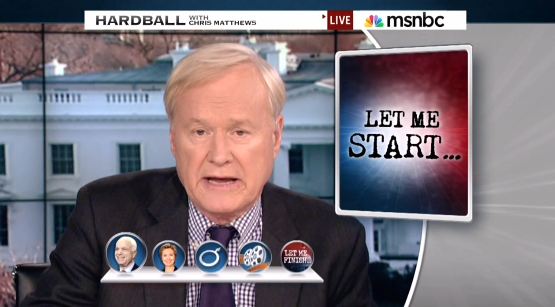 CHRIS MATTHEWS: Why is John McCain so angry? Forty years after the Vietnam POWs came home, the most famous of them is angrier than ever. Why is America, why are we fighting the Vietnam war all over again in the United States Senate? The ticked off vitriol against Chuck Hagel, what is it about is? Is it for show? Is it about something Hagel said in the cloakroom? Is it about the basic unfairness of Vietnam itself that some went and some didn't? Is it about Lyndon Johnson's inability to either win that war or end it? What is it that burns so deeply in John McCain these days? It seems to excite those who knew nothing of Vietnam, but for hard reasons want to replay it again and again in Iraq and Afghanistan and Libya and Syria and, yes, eventually in Iran. Well, tonight, we dig into the deep well of resentment burning in John McCain's patriotic heart.

A resentment not against the North Vietnamese who imprisoned and toured him all those years, not against George W. Bush and his political henchmen who tried to stain McCain's reputation back in 2000, but against a guy who fought against fear and rallied against wounds just like he did in the same army of America's long nightmare in Vietnam, Chuck Hagel. A nightmare by the way whose flashbacks must haunt still the mind and heart of John Sidney McCain. I'm joined by David Corn of Mother Jones and Joy Reid of the Grio. Both are MSNBC analysts. Both of you, sir and lady, are younger than me but I'm absolutely convinced we're watching a flashback. Watch this. Here is Senator John McCain. He did a long, angry windup before he launched into his first so-called question. It was really an indictment for a former Senate colleague and former friend and fellow Vietnam veteran Chuck Hagel. It included putdowns as well as references to Vietnam.

MATTHEWS: It looks like a flashback. McCain is so angry. Is it really about the surge?