MSNBC on Monday featured 9/11 truther and network analyst Toure to slam the "paternalistic" Bill Cosby for suggesting the Trayvon Martin shooting is more about guns than it is about race. Toure derided this "dangerous sentiment" as "not at all true" and implied that the popular comedian is dumb: "But in terms of nuanced political thinking, [Cosby] has not shown himself to be a big fan of that."

Toure used Cosby's recent comments as a jumping off point to scold the former sitcom star: "And he has quite often said things that put him into the category of, with friends like these, who needs enemies?" Specifically, Toure bashed Cosby for talking about "a lack of morality in the black community." News Nation host Tamron Hall was so taken aback, she sputtered, "But Bill Cosby is not anti-black. What are you saying?"  [See video below. MP3 audio here.]

Toure huffed, "I'm saying that he has on several occasions said things that are extremely negative, paternalistic and rather misguided about the black community..."

Toure is a regular on MSNBC, appearing to give his wisdom and thoughts on issues of the day. However, he's also a 9/11 truther.

Van Jones was forced to resign partly bc questions the truth of 9/11 but that Pentagon attack is really fishy... [Link to tweet]

How could a plane crash into the Pentagon? And not appear on video cameras?? And leave little wreckage??? #Don'tbuyitfiremenow. [Link to tweet]

This fascinating video raises questions about the Pentagon attack: 757 or missle? http://bit.ly/12AOlN [Link to tweet]

See here for more on Toure. The question must be asked, again, why is MSNBC employing a 9/11 truther?

A transcript of the April 16 segment, which aired at 2:44pm EDT, follows:

BILL COSBY: It's about the gun. It is about this gun. Guns in our country. I know that when you have a gun, you may not realize it, but you put on it your person and you mean to pull this and kill somebody. Because you have this power and you have this thing on you. It- it heightens what you're supposed to be looking for.

TAMRON HALL: Joining me to talk about this, MSNBC contributor Toure. I should point out that Bill Cosby says he once owned a gun but no longer does. He says there is a need to get guns off the streets and people should be taught to use every possible alternative before shooting someone, taking one's life. What's your take on it? 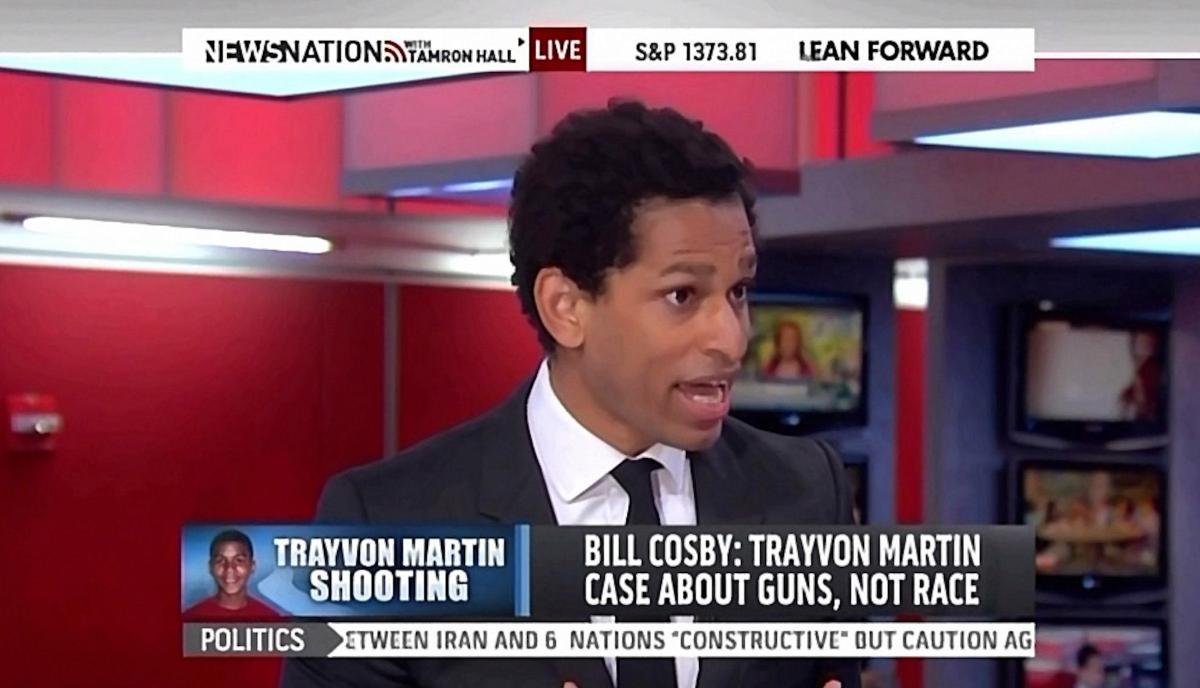 TOURE: Absolutely. I agree all that and I appreciate the brother probably has a different perspective than many of us because he lost his son to gun violence. So, we must be respectful to him, important person in the community, in America for a long time. Respectful of our elders. But this is a very dangerous sentiment and it's not at all true. Yes, it is a gun situation but it is absolutely a racial situation in that Trayvon Martin was clearly profiled as a criminal black man, as if those two things are synonymous in America by George Zimmerman. That's why he pulled his gun and used it on Trayvon. And when a person of Bill Cosby's stature comes out publicly and says it's not a racial issue, it's a gun issue, it gives fuel to all those who misunderstand the situation. It is not about race and I and Al Sharpton and Jesse Jackson are making it about race when it's not. He's giving fuel to those people who say, "See, look. Even Bill Cosby agrees with us" and that's not correct.

HALL: Why can't Bill Cosby have his own opinion? Not all black people think the same.

TOURE: Surely he can have his own opinion. But to say that it's not-

HALL: But you said that it was dangerous.

TOURE: I think it is dangerous. He can have his own opinion and have a dangerous opinion. It not correct to say we can drain race out of the situation. It's just a person with a gun shooting another human being.

HALL: But that's his perspective.

TOURE: I'm not disagree with that and I'm allowing him to have his perspective. And his perspective  is dangerous in saying that it's not about race is clearly incorrect. That we don't have a rash of people profiling innocent young white men walking down street, talking to their girlfriends on the phone and then attacking them and shooting them. That's not happening. That is happening black men.

HALL: I can't speak for Bill Cosby, but I can say, what if he looks at you and says you're dangerous because you have now said that George Zimmerman profiled Trayvon Martin, which is to be determined in a court of law now that he's been arrested and charged. And according to prosecutors, they say he did profile Trayvon Martin, but this is all to be determined by a jury of his peers and we're going to watch this play out. So, Bill Cosby, he could say the same thing about you.

TOURE: We hear the profiling. So, that's not conjecture. He sees somebody in the distance who is doing nothing more than down the street on a cell phone. And he decides this person is on drugs. This person is a criminal. This person is threatening and to be feared.

HALL: Those are the charges.

TOURE: Well, that's what George Zimmerman said. So, that is profiling. There is- He is not going to see a white person. We don't have an epidemic of people seeing young white men and assuming they're criminals. We do have an epidemic of the world seeing black maleness as synonymous with criminality and that's not true.

HALL: Let me ask this, why then are some turning this into an adversarial thing with Bill Cosby, when, for example, the New Yorker points out that the United States has the highest rate of citizen gun ownership in the world. The second highest is Yemen. Why be contrarian with him and say wait a minute. There can be dual conversations here. Why does he have be to dangerous or wrong? Why can't we applaud that and applaud that? Let me finish. Wayne LaPierre, who is the executive vice president of NRA, did not mention Trayvon Martin by name but he is criticizing news organizations for what he says is singling out one killing and ignoring many other violent crimes that happen in the United States every day. Maybe Bill Cosby wants to highlight those without diminishing the serious and notable questions that we have not ignored regarding Trayvon Martin.

TOURE: Bill Cosby is an extraordinary American. He's extraordinarily talented. He's had an amazing effect on my life, on many lives. But in terms of nuanced political thinking, he has not shown himself to be a big fan of that. And he has quite often said things that put him into the category of, with friends like these, who needs enemies?  I mean, like, he's repeatedly talked about a lack of morality in the black community, as if we don't teach our children morality, as if we want to go to prison, as if that's some badge of honor. That is not the way things are in the black community.

HALL: But Bill Cosby is not anti-black. What are you saying?

TOURE: I'm saying that he has on several occasions said things that are extremely negative, paternalistic and rather misguided about the black community, As if we want to go to prison. That's a badge of honor. That is a great mark of shame for many, many people. It is nothing that we want to do. When he talks about parents not teaching their children, black children morality. That is just simply not the case. I don't know what community he is talking about. And then we come to this situation where it's not about race, it is just about guns. It is about both. And surely this does not happen if this individual does not see a black person and pour stereotypes into him as if he is a criminal black man.