After guest Howard Fineman suggested Republicans have opposed the President from the start, the Hardball anchor retorted, "What? 'We hate you, want to kill you–'  politically."

Amazingly, later in the show, during a segment on Rick Perry, Matthews derided a reference to "high-powered bullets" harming the economy. With no self awareness, he yelled, "Don't they know in Texas to stop using bullets as a reference point for presidential candidates. I'm sorry. Stop it!"

After Fineman asserted that those people at Obama's inauguration weren't the ones fighting the President's agenda, Matthews spewed, "It was like the secessionists...Even as he was being inaugurated, the voices of secession were uniting in the south and planning to bring this guy down, right?"

Fineman, a former editor at Newsweek, agreed: "That's my view of it."

[Thanks to MRC intern Eric Ames for the video.]

A transcript of the exchange can be found below: 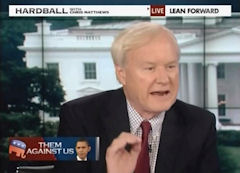 CHRIS MATTHEWS: Howard Fineman, what I'm hearing now in the aftermath of the debt fight is that President Obama is somehow engaging in class warfare, divisive politics when from day one, from second one, the goal of the Republican Party of the right, of corporate America, of the Tea Party, the whole shebang has been eliminate this guy's presidency. It's been personal, it's been about him, and it's about hatred.

HOWARD FINEMAN: Well, I think that in a situation like that, people often think that. Your political foes think that, but they didn't used to say it out loud.

MATTHEWS: What? We hate you, want to kill you–  politically.

FINEMAN: Politically. Quite the way they did so brazenly at the beginning. I think- was out there on the mall when Obama- when the President was inaugurated. You thought that perhaps all of America was out there. There were a million and a half people there, but it wasn't all of America. It was Barack Obama's America, and the people on the right, the conservatives, the corporate leaders, for the most, part decided from day one that that crowd that they saw in the mall and that President that hey saw taking the oath was not their president.

MATTHEWS: It was like the secessionists. You know, the way you said that, the way you phrased because of your history sense, was almost, like, even as he was being inaugurated, the voices of secession were uniting in the south and planning to bring this guy down, right? And divide.

FINEMAN: Well- That's my, my, my view of it. I think the President made some efforts to reach out. I don't know how wholeheartedly he did. I think he felt from the beginning that his, his overtures would be rejected. The way the things started here in Washington from the very beginning was quite icy and distant from the get-go in the beginning of the Obama presidency.