The network morning shows on Saturday thrilled over Bill Clinton's impromptu return to the White House. Commenting on the ex-President and Barack Obama's appearance on Friday to promote the tax bill compromise, Good Morning America's Dan Harris raved, "That was an awesome bit of political theater. An amazing atmosphere in the room, I have to imagine."

Reporter David Kerley saw Clinton's Q&A as a return to the 1990s and "the form that he showed in that White House briefing room when he was President." On NBC's Today, Mark Halperin touted Clinton holding court with reporters for 20 minutes (after Obama exited) as "great political theater."

Finding lessons for the current president, he enthused, "Bill Clinton figured out how to compromise, but still show people he was true to his principles and fighting hard for the middle class." 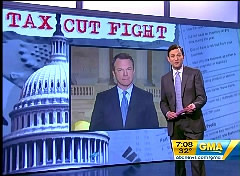 CBS's Early Show offered the most skepticism. Political analyst John Dickerson asserted that the ex-President is "quite popular and quite good at selling" the tax bill. But, he also joked, "Well, you imagine if the cleaning crew didn't have to come in, [Clinton] would still be there talking."

Nightly News' Brian Williams ended a piece on Clinton and Obama by offering a note on socialist Senator Bernie Sanders' day long speech against the tax deal. Even though the spectacle wasn't technically a filibuster, Williams lauded, "At one end of town, two presidents in the same room. And at the other end, a genuine Mr. Smith Goes to Washington moment on Capitol Hill."

A transcript of the December 11 Good Morning America segment, which aired at 7:07am EST follows:

DAN HARRIS: And now to that fight over your taxes in Washington. President Obama brought out a very big gun yesterday to endorse the deal that he cut with Republicans, which has triggered a huge revolt within his own party. Bill Clinton was holding court in the White House briefing room yet again yesterday. Meanwhile, the liberal senator, Bernie Sanders from Vermont, literally spent the entire day blasting the bill in a prolonged filibuster on Capitol Hill. And Capitol Hill is where we find David Kerley this morning. David, good morning to you. Time is tight. They're running out of time. How do they get this thing done?

DAVID KERLEY: By doing some reading, Dan. In fact, Senators are waking up this morning with some reading material. They got, late yesterday, they got the actual text to this bill to cut taxes and reduce others. Now, the senators are expected to pass this bill despite all their grumbling over the last couple days. But in the House, it's a much different story. They are livid on the House side, the Democrats. They say they're not going to consider this bill. Well, President Clinton came to the White House in an effort with President Obama to try and silence those Democratic critics.

BILL CLINTON: The agreement taken as a whole is, I believe, the best bipartisan agreement we can reach to them largest numbers of Americans and maximize the chances that economic recovery will accelerate and create more jobs.

KERLEY: Former President Clinton also said this is really a stimulus bill. But he can't use that word, Dan. Stimulus right now is a dirty word in this town.

HARRIS: That was an awesome bit of political theater. An amazing atmosphere in the room, I have to imagine.

KERLEY: Yeah, it was remarkable to see the two of them walk in with very short notice. And then after President Clinton opened it up for questions, President Obama tried to extradite [sic] himself or get himself out of there, extricate himself as gracefully as he could.

BARACK OBAMA: I've been keeping the First Lady waiting for about a half hour, so I'm going to take off.

KERLEY: Mr. Clinton continued to take questions for another 20 minutes, Dan. It was a little bit of deja vu. Kind of the '90s with Mr. Clinton and, really, the form that he showed in that White House briefing room when he was President.

KERLEY: It looks like the Senate will pass it on Monday. And Democrats admit on the House side they've put themselves in a box, saying they wouldn't consider it. So, they're going to look to change it slightly, that they can get the Senate to agree on. A lot of work left, but not much time left.