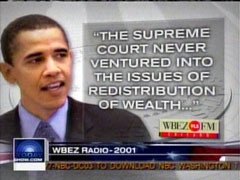 ABC's "Good Morning America" and CBS's "Early Show" on Tuesday avoided any mention of the newly found 2001 audiotape in which then-state Senator Barack Obama lamented to a radio interviewer that "the Supreme Court never ventured into the issues of redistribution of wealth." Only NBC's "Today" show played any of the tape.

GMA and "Early Show" hinted around the subject, but simply in terms of describing it as an attack on Obama. ABC co-host Robin Roberts vaguely asserted, "John McCain claiming Barack Obama is a socialist. Obama countering that McCain is a Bush Republican." On CBS, reporter Jeff Glor continued the equivalence. He derided, "Meanwhile, the campaigns were making their closing arguments, with special emphasis on the arguing part."

Both morning shows replayed McCain's critique in a Pennsylvania speech: "Senator Obama is running to be redistributionist [sic] in chief. I'm running to be commander in chief." But without the context of the audiotape, GMA and "Early Show" portrayed it as just more negative campaigning.

On "Today," reporter Andrea Mitchell actually played the "redistribution of wealth" audio and then added, "John McCain's advisers say that proves Obama is secretly a socialist." Explaining the Obama defense, Mitchell noted, "The Obama campaign says the radio interview was taken out of context and is a fake controversy." Providing the best context of the issue, Mitchell went on to highlight a local news station's interview in which Senator Joe Biden was grilled over whether or not his running mate has socialistic views.

But the Supreme Court never ventured into the issues of redistribution of wealth, and of more basic issues such as political and economic justice in society. To that extent, as radical as I think people try to characterize the Warren Court, it wasn’t that radical.

In a follow up piece on GMA, co-host Diane Sawyer and former Democratic aide-turned journalist George Stephanopoulos continued to dance around the subject. Sawyer asked this question about falling confidence in Obama over the issue of the economy:

DIANE SAWYER: Let me ask you about being inside the Obama campaign at this point....And in trust to handle the economy, this is the one that got my attention. It's gone down from 18 to 10. His advantage is now 10. Is this worrying? What does this mean?

Proving that he too is adept at verbal gymnastics, Stephanopoulos answered the query by not mentioning anything about socialism or redistribution of wealth and how these comments might have hurt Obama's numbers: 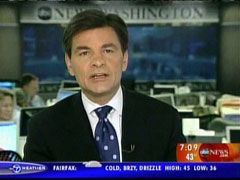 GEORGE STEPHANOPOULOS: That is a bit of a move. I think it's something you have to watch over the next 48 to 72 hours. And top strategists in both campaigns are watching that right now. But, really, the key number to watch is Barack Obama's overall number. Right now, he's about 52 percent. As long as he stays above 50, it's going to be pretty comfortable, even if John McCain's number starts to rise to 47 or 48. Its if he starts to drift down to the 51 or 50 mark, that could be significant, because the Obama team doesn't think it's likely that he's, in the final results, going to beat his last polling number.

A transcript of Andrea Mitchell's reporting on the audiotape on Tuesday's "Today" can be found below:

ANDREA MITCHELL: At the same time he unleashed a tough ad to rebut a barrage of new Republican charges.

MITCHELL: The latest attack over Obama's comments seven years ago on public radio about the Supreme Court's role in furthering civil rights.

OBAMA [From 2001 radio interview]: The Supreme Court never ventured into the issues of redistribution of wealth.

MCCAIN: He believes in redistributing wealth, not in policies that grow our economy and create jobs!

MITCHELL: The Obama campaign says the radio interview was taken out of context and is a fake controversy. Still the charge circulating on conservative Web sites was leveled at Joe Biden during a Florida TV interview.

BARBARA WEST, WFTV ANCHOR: How is Senator Obama not being a Marxist, if he intends to spread the wealth around?

JOE BIDEN: Are you joking? Is this a joke?

BIDEN: Or is that a real question?

A transcript of the relevant section from "Early Show" reporter Jeff Glor's report on Tuesday's program, which does not address the audiotape, is below: 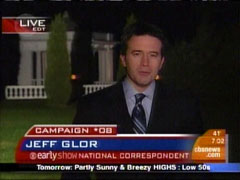 JEFF GLOR: Meanwhile, the campaigns were making their closing arguments, with special emphasis on the arguing part.

OBAMA: The plain truth is, is that John McCain has stood with George Bush every step of the way.

UNIDENTIFIED MAN: Obama and Democrats' politics endanger American lives. They are not qualified to lead our military and our country.

UNIDENTIFIED MAN B: John McCain wants to tear Barack Obama down, with scare tactics and smears.

GLOR: But while the two men's messages do not cover the same ground, their feet do.

Finally, a transcript of the McCain "redistributionist-in-chief" section of Jake Tapper's segment on Tuesday's "Good Morning America" can be found below:

For a round-up of how Monday's evening news programs covered the subject, see an October 27, 2008 NewsBusters posting.