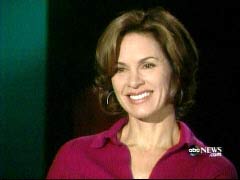 Over a three day stretch, ABC devoted almost 15 minutes of air-time to a documentary filmmaker who asserts in his movie "Bloodline" that the resurrection of Jesus Christ was a massive hoax perpetrated on humanity. Additionally, on Friday's "Nightline," reporter Elizabeth Vargas left out any mention of the bizarre interests of the film's director, Bruce Burgess. He's directed and written documentaries on Bigfoot, the Bermuda Triangle, Area 51 and a secretive look at a U.S. government's supposed cover-up of the alien landings at Roswell.

Wouldn't it be relevant to know that Burgess seems to be fascinated with every weird conspiracy imaginable? (And hasn't the mainstream media mocked bloggers for not being restrained journalists? How serious is Bigfoot and the the subject of the Bermuda Triangle?) On Sunday's "Good Morning America," Burgess's second stop on his ABC tour, co-host Bill Weir at least asked about his extravagant interests: "I do have to point out the fact that some of your other documentary work includes the Bermuda Triangle, Area 51, looking for Bigfoot in Oklahoma." (NewsBusters' Mark Finkelstein blogged this appearance.)

Weir then wondered, "Why should we believe you of all people when it comes to something this huge?" Vargas, during her nine minute promotion of the documentary, failed to find time for such a query. She did, however, repeat verbatim, the crux of Burgess's argument:

ELIZABETH VARGAS: One theory is that [19th Century French priest] Father Sauniere was paid for his silence, because he'd found proof of a shocking secret that Mary Magdalene, known as the prostitute in the Bible was actually married to Jesus. And that Jesus and Mary Magdalene had a child. That after the crucifixion she fled with that child here to this rugged and very remote corner of southern France. That their descendants and their secret were protected in the Middle Ages by a group of crusaders whom historians called the Knights Templar...The novel, "The Da Vinci Code" is based on the theory that those knights also buried some sort of proof that the bloodline of Jesus exists.

Now, occasionally, Vargas did challenge what Burgess contended could be "the greatest cover-up of all time." But the rebuttals were of file footage from the controversy that erupted during the 2003 and 2004 coverage of Dan Brown's novel, "The Da Vinci Code." She talked to no one specifically on the subject of charges made by Mr. Burgess. Finally, if Mel Gibson, director of "The Passion of the Christ," also happened to be fascinated with whether werewolves, unicorns and leprechauns were real, journalists surely wouldn't have ignored such relevant information.

A partial transcript of the May 2 program, which aired at 11:43pm, follows:

TERRY MORAN: If you've read 'The Da Vinci Code" or seen the movie version, you're familiar with the notion of the Holy Grail. That's the belief that the chalice used by Jesus at the last supper survived through the centuries and retains miraculous power. Well that legend is right at the core of 'The Da Vinci Code,' but with a twist. In Dan Brown's version, the grail is not a chalice. Brown imagines the chalice is instead Mary Magdalene carrying the child of Jesus. 'The Da Vinci Code' is pure fiction, of course. Some people believe this controversial theory, including a filmmaker you are about to meet. And in a new documentary he claims they may have found new evidence to support it. Elizabeth Vargas reports.

ELIZABETH VARGAS (filmmaker): In 1891, it's been documented that a French parish priest, Father Berenger Sauniere, found something hidden under the altar of his tiny church in the mountain village of Rennes le Chateau. Whatever it was that he found astonished him.

BRUCE BURGESS: We don't know what he found exactly. By all accounts, he really found something that made this priest basically break with his faith and his church.

VARGAS: It has also been documented that it not only shook his faith, but for reasons nobody has been able to pinpoint, it made the poor parish priest suddenly very rich. And nobody has been ever able to explain where that money came from?

BURGESS: Absolutely, right. But essentially, in today's money, he spent somewhere between $3 million and $5 million U.S. dollars which is a phenomenal amount, staggering. And so where did he get it?

VARGAS: One theory is that the Father Sauniere was paid for his silence, because he'd found proof of a shocking secret that Mary Magdalene, known as the prostitute in the Bible was actually married to Jesus. And that Jesus and Mary Magdalene had a child. That after the crucifixion she fled with that child here to this rugged and very remote corner of southern France. That their descendants and their secret were protected in the Middle Ages by a group of crusaders whom historians called the Knights Templar. The legend goes that those knights returned from the Middle East with an enormous treasure, including the Holy Grail, that they buried someplace in the hills of southern France. The novel, "The Da Vinci Code" is based on the theory that those knights also buried some sort of proof that the bloodline of Jesus exists.

BURGESS: Three years ago, I set out to investigate what some believe is the greatest cover-up of all time.

VARGAS: Bruce Burgess' documentary out this month suggests that he and another Englishman may have discovered the first tangible evidence that there is something to those theories and legends. In a series of caves around Rennes le Chateau they found a message in a bottle they think is from Sauniere.

UNIDENTIFIED FEMALE: I think you're gonna damage the paper.

UNIDENTIFIED MALE: We certainly are. But we're gonna to get it out anyway.

UNIDENTIFIED FEMALE: I can't believe this.

BURGESS: Can I read you what he wrote? The resurrection of Jesus was a trick. It was Mary Magdalene who took his body from his tomb. The disciples were fooled. Later, the body of Jesus was discovered by the Templars and then hidden three times. Rome knows all about this, but they can't afford to let the secret to be known. They threatened to kill if the location of the tomb was revealed.

VARGAS: If all of this sounds compelling, wait a second. Because when 'The Da Vinci Code' was published several years ago we asked a lot of biblical scholars and historians about whether they thought it was true that Jesus was married. The majority thought not.

DARRELL BOCK (DALLAS THEOLOGICAL SEMINARY): Everything that we have and church tradition suggests that Jesus was single.

VARGAS: Is there any evidence in the Bible at all, anything that educates us or tells us whether or not Jesus might have been married?

VARGAS: Nothing either way?

VARGAS: We also interviewed a number of scholars who specialized in medieval history. The vast majority told us that the Knights Templar had no particular connection to Mary Magdalene.

UMBERTO ECO (UNIVERSITY OF BOLOGNA): The idea of the story of Jesus as married with Mary Magdalene, it was concocted probably in the middle of the 19th Century.

VARGAS: Umberto Eco, who has researched the story has an entire room in his home that he calls his library of books about wrong theories, including books saying that the Earth is flat. He says the whole theory about Mary Magdalene and Jesus has no more reality to it than a fairy tale.

ECO: The same than the reality of Pinocchio, and Little Red Riding Hood.

VARGAS: Why do you think it's legitimate?

BURGESS: Rennes le Chateau has been such a hot spot for treasure hunters. We knew the moment we found anything that people were going to question it, and say, you know, is this real or is it a hoax? And so we've done as much sort of scientific analysis as is possible. The pottery itself, the objects in the chest, we had dated by the British Museum in London. These are authentic, genuine, first century items from Jerusalem. And so, we were bowled over because, yes, we'd already, I think, established this wasn't a simple hoax.

BURGESS: Yes, I wouldn't disagree with you and I don't think they do prove that Jesus was married to Mary Magdalene. And I think we have been very careful in the film to just put out what we found. I think they are credible enough to bring in to a wider debate now.

VARGAS: Burgess told us they plan to formally excavate the body they found. But even he says he cannot claim his findings will ever prove the theories that have so thoroughly captured the popular imagination. If your discovery doesn't prove that Jesus and Mary Magdalene were married, something that a lot of people still find preposterous, what does it prove?

BURGESS: I think it proves that the Sauniere mystery, the Abbe Sauniere mystery in Rennes le Chateau is real. That he found something that he thought was of momentous importance and that he tried to pass that secret on.