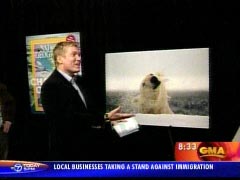 "Good Morning America's" liberal meteorologist Sam Champion continued his crusade of turning the weather report into an environmental lecture on Friday. Champion, the man who once hosted a segment that warned "billions" could die from global warming, devoted over eight minutes of the program to climate change. Reporting live from Colorado, he promoted the Aspen Institute's conference on the environment.

Champion interviewed the executive vice president for the think tank, Elliot Gerson. (The Aspen Institute hosts seminars on various subjects, including environmental and economic.) And while Gerson promised a "diversity of opinions" at the conference, no such diversity appeared on "Good Morning America." Champion touted the conference throughout the show's entire two hours, but never once featured anyone skeptical of global warming's dire effects.

Instead, Champion interviewed individuals such as Gerson, who also said that global warming can't be solved by scientists and politicians. "It has to be an engaged public committed to making changes in behavior," he claimed. Now, this could be construed as liberal code for cajoling Americans into using mercury laced light bulbs and other "eco friendly" devices. That hardly seems like a "diversity of opinions."

Also featured on GMA was biologist and National Geographic photographer Paul Miklin. Standing in front of a picture of a polar bear that he took, Miklin essentially admitted that the furry animals are avenues to promote climate change activism: "...Now I realize what I need to do is try and tell these stories though National Geographic magazine by using animals such as polar bears to hang this campaign on." And of course there was no mention of reports that indicate global warming actually stopped ten years ago.

In the 8:30 half hour, Champion narrated a segment about the mountain pine beetle and the damage it has created by killing trees all over the western part of the United States. The ABC weatherman dubbed it the "whole global warming and pine beetle issue." (The beetles thrive in warm temperatures and would be killed off with harsh winters.) Again, Champion presented no opposing view that warm winters, which are enabling the beetles, could simply be part of a warming/cooling trend. Simplifying the issue, he declared, "Add to that drought conditions, making the trees susceptible to the insects. Plus, warmer than normal winters, thanks to climate change. The beetles have thrived."

Champion has a long history on GMA of passing off extremist environmental opinions as reasonable. On June 25, 2007, Champion gushed over the "experiment" of a liberal environmentalist who was forgoing toilet paper.

A partial transcript of the final two segments, which aired at 8:32am, follow:

CHAMPION: We are lucky enough to be in Aspen. We're in this big room where the first ever Aspen Environment Forum will be here. Elliot Gerson who put the whole thing together with the Aspen Institute. Elliot, we've been talking about it, kind of leading up to it. But, you know, you get a bunch of people in a room and you're going to talk about the environment and maybe climate change, but why is it important just to kind of get these people together in one place?

ELLIOT GERSON (Aspen Institute): Well, Sam, this just isn't about talk. Everything we do here is about talk leading to action. We've got leading scientists, statesmen, scholars, business people and what makes this special, what makes it unique, is the diversity of opinions there and the fact that the kinds of challenges we're facing with the environment and environment [sic] and, and global climate change require an engaged public. So, it can't be solved just by politicians, just by scientists. It has to be an engaged public committed to making changes in behavior.

CHAMPION: And so, maybe in a place like this with everybody together talking, people will come up with ideas and they'll get the word out a little about it that you have a number of, by the way, thank you, for having us up and putting everything together.

GERSON: It's our pleasure.

CHAMPION: There are number of forums that are going to be going on throughout the day with experts that are from all different walks of life and different categories . One of them, I was really psyched to meet. Paul Miklin, by the way, very nice to meet you.

CHAMPION: Who is one of the those amazing National Geographic photographers. Tell me a little bit about the pictures that you capture that show us evidence of global warming and climate change all over the world, but particularly in the arctic areas.

MIKLIN: Well, thanks, Sam. I grew up in these areas, ever since I was a young kid. So, I went on to be a biologist and then now I realize what I need to do is try and tell these stories though National Geographic magazine by using animals such as polar bears to hang this campaign on, to say that if we lose sea ice in the Arctic and projections are to lose sea ice in the next 20 to 50 years, we ultimately are going to lose polar bears as well.

CHAMPION: Because we see these pictures. There gorgeous pictures of these polar bears. But this one was kind of in distress. [Motions to picture of polar bear.]

MIKLIN: This-- Well, not really. It was just a moment where I was not really thinking clearly. We got so hung up in taking the photograph that I was ten feet away, lying on my belly and this bear is shaking water. And he was just-- He took a lunge at me, basically. But as he lunged up and was coming down on me, the ice broke and got away. And my first thought was I knew I had the shot, so I was really excited that this show would help tell the story that I wanted to tell about melting ice.

MIKLIN: Thank you very much.

CHAMPION: And thank you so much. And there are so many more that are in the magazine to see. And, of course, we'll have some on our website as well.

CHAMPION: While we were out here for the Aspen Environment Forum, one of the things we stumbled on is a story that's been making headlines all over the west and out in the papers again today. It's the warming cycle that's been in the western state also a pine beetle infestation that's killing trees by the millions, six million acres of trees dead because of this beetle, in western America and 20 million acres in Canada. This is a big problem and this is what it looks like with the whole global warming and pine beetle issue. The American west is under attack by a silent killer that's causing some of the worst destruction ever to hit our nation's forest land.

SANDY BRIGGS (Forest Health Task Force): People are looking out their windows now and seeing a lot of dead trees where they were green before.

CHAMPION: This is the tiny terror to blame, the mountain pine beetle. It may be small, but it's big in numbers, an epidemic of them exploding across the west, wiping out acres of large pole pines.

CHAMPION: That's in Colorado and Wyoming alone. The destruction zone, twice the size of Rhode Island. The epidemic began in 1996, but it's in the last year, it's really taken off. Just look at the damage from this. [Before and after photos of forest appear onscreen.] To this. In just the last two years. And an image repeated over and over

KHYL: The tree's response to the beetle boring into the bark. The tree actually tries to pitch the beetles out.

UNIDENTIFIED FEMALE VOICE [close up of glass with beetle in it.]: The black thing floating there, that's actually the beetle.

CHAMPION: Five years now, all of Colorado's large pine pole forests will be wiped out, state forestry officials say. And it's just one of eight states across the west impacted. That's six million acres of forest land destroyed, with another 20 million in Canada. And that number will grow. Officials say the beetles are expected to infest the entire west over the next 15 years.

CHAMPION: Add to that drought conditions, making the trees susceptible to the insects. Plus, warmer than normal winters, thanks to climate change. The beetles have thrived.