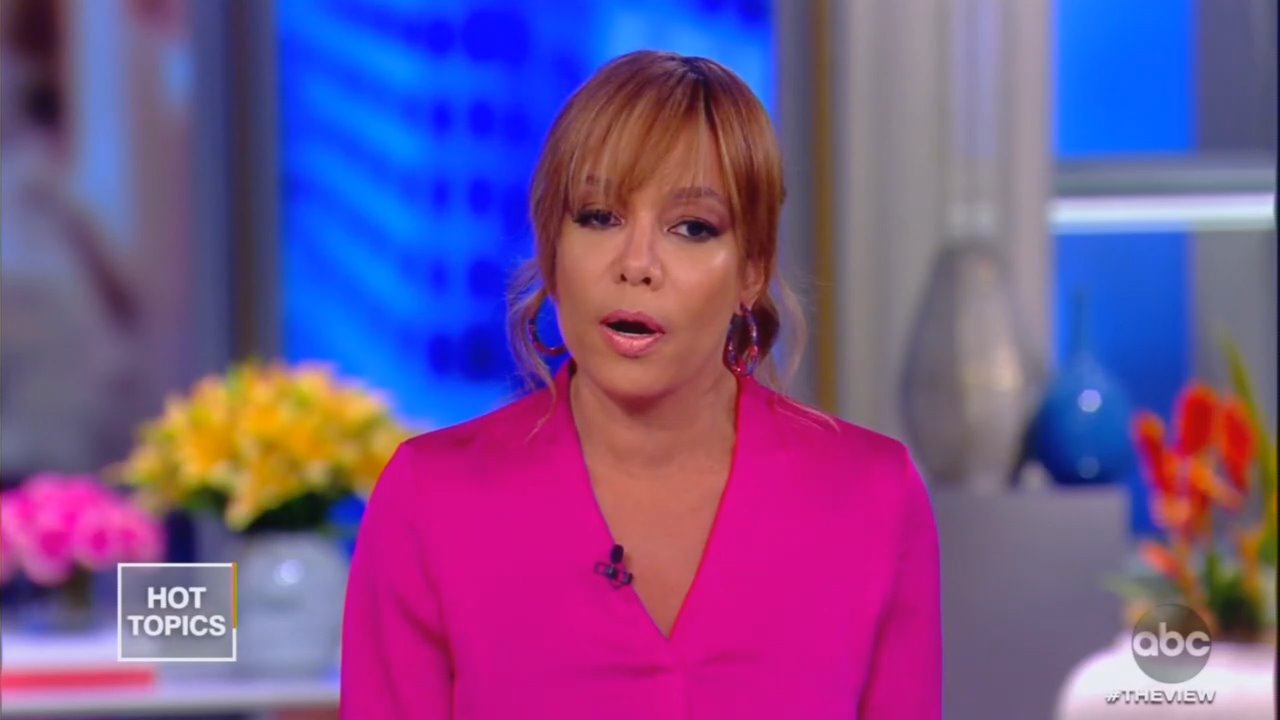 On Thursday, the ladies of The View weighed in on Hollywood’s reaction to liberal comedian Ellen DeGeneres and former President George W. Bush sitting next to each other at a Dallas Cowboys game. While some of the co-hosts acknowledged that they thought it was important to have friends on both sides of the political aisle, co-host Sunny Hostin understood why some liberal celebrities were “put off” by a liberal lesbian having a friendship with a Republican President who dared to support traditional marriage.

Co-host Abby Huntsman had the most rational analysis of the panel; saying “if you’re going to criticize Ellen for sitting next to him, she made that decision herself, who are we to judge?” Co-host Joy Behar said that she “didn’t want to get to know George W. Bush because I knew I would like him” but later stressed that the debate about DeGeneres hanging out with “W” was “not just about disagreeing with somebody.”

After describing him as a “likable kind of guy,” Behar suggested that “if you lost a child in Iraq, then you don’t like him so much.” To the delight of the audience, Behar declared “I don’t see myself hanging out with Donald Trump any time in this lifetime.”

Co-host Sunny Hostin seemed to agree with the position of left-wing celebrities that DeGeneres made a mistake by sitting next to America’s 43rd President:

When you think about the position that he took about gay marriage when he was in power and had the power to do something...he actually pushed for a Constitutional amendment to make sure that marriage was defined as between a man and a woman...so, I mean, when you are a woman like Ellen, who came out and changed the lives of so many people in the LGBTQ community, I can understand why there were people that were put off by seeing her do that.

For her part, Hostin refused to respond when Huntsman repeatedly asked her “were you put off?” In the absence of a response from Hostin, co-host Meghan McCain declared that “I don’t choose who I’m friends with based on their political back(ground)” but she noted that she “would have a hard time being friends with Rand Paul or anyone associated with him.”

As the conversation came to a close, co-host Whoopi Goldberg went on a bizarre tangent where she implied that Bush was homophobic and suggested that if she was one of the “two gay women” sitting with him at the Cowboys game; that she would be “leaning on him” and “hugging him” to make him uncomfortable. This was the most obvious example of the ladies of The View failing to comprehend the idea that Bush and DeGeneres could get along in spite of the former President’s opposition to same-sex marriage.

GOLDBERG: Ellen DeGeneres defended herself for being at a game with former President George W. Bush at Sunday’s Cowboys game; saying she’s friends with a lot of people who don’t share the same beliefs that she does. But it’s sparked a backlash online including celebrities like Mark Ruffalo; who say she cannot overlook how Bush handled the Iraq war, gay rights, and Hurricane Katrina. So, what did you think when you saw them sitting next to each other?

ABBY HUNSTMAN: I didn’t spend my Saturday tweeting out…

HUNTSMAN: …how upset I was about it. How much time we’re wasting tweeting negative things about other people when we should be spending that time with our children, with our family, or heaven forbid friends that might think differently than we do. I’m sorry but I was…I was upset…I don’t know Ellen. Say what you will about her, but a lot of people that were tweeting don’t know Ellen. So, how about we get out of people’s lives? Stop judging people for what they’re going to do and who they’re going to sit next to.

HUNTSMAN: What I love, and…and you mentioned this yesterday. We had Susan Rice on, and Susan Rice talked about having two kids that were completely opposite in their political beliefs.

HUNTSMAN: She said, our household welcomes everything because that helps us learn. That makes us better people. I grew up very religious. I was Mormon. I have since left the church. I still love all of my friends and family back home who are still religious and I hope they respect me for the life that I live because that’s what makes this country go round, and that’s what makes this country unique. So, I’m sorry, if you’re going to criticize Ellen for sitting next to him; she made that decision herself. Who are we to judge what she’s going to do?

BEHAR: I…I don’t agree with that 100 percent, what you just said because I…I always…I always said I didn’t want to get to know George W. Bush because I knew I would like him and that…I knew he would because they…you know, he seems like a likable…

SUNNY HOSTIN: He really does.

HUNTSMAN: To get a beer with.

BEHAR: You know, you see him up there in Ken…Kennebunkport with the...

HOSTIN: …seems to really dig him.

BEHAR: Yeah, and they like him, and I always thought but then, you know, if you lost a child in Iraq, then you don’t like him so much, and I don’t see myself hanging out with Donald Trump any time in this lifetime.

BEHAR: So, it’s not about only…it’s not only about disagreeing with somebody, which I certainly…

HUNTSMAN: That’s your own choice, and this was Ellen’s choice.

MCCAIN: But I think there’s…

BEHAR: Well, she’s entitled to her choice, but it’s not just about disagreeing with somebody.

HOSTIN: Yeah. I…I…I agree with that. When…when you think about the position that he took about gay marriage when he was in power and had the power to do something, I mean you think about 2004…

MCCAIN: The same position Obama took, for the record.

MCCAIN: …what, how many years? Sunny, it’s been what? Ten years?

HOSTIN: But in 2004, when he was in a position to do something about it, he actually pushed for a Constitutional amendment to make sure that marriage was defined as between a man and a woman, and to my knowledge, his father has come out and said, “well, I’ve mellowed on that position,” but he hasn’t come out and really said anything about it, so I think when you are a woman like Ellen, who came out and changed the lives of so many people in the LGBTQ community, I can understand why there were people that were put off by seeing her doing that. It is…

HOSTIN: I agree that it is…

HUNTSMAN: Were you put off?

HUNTSMAN: But were you put off?

MCCAIN: I think part of the issue is, and I…I’m, like, somewhere in the middle on all of this. It’s not that we can’t have friends on both sides. Obviously...

MCCAIN: …we all have that.

HUNTSMAN: Well, we do this show.

MCCAIN: …probably does. I don’t choose my friends based on their political back…

MCCAIN: I mean, unless it’s something truly radical. I mean, I would have a hard time being friends with Rand Paul or anyone associated with him.

MCCAIN: I’m going to just put that right there. But I will say the revisionist history…and I keep getting the same thing…

MCCAIN: … on the show everyday because I’m not going to be here tomorrow.

HUNTSMAN: How are you missing tomorrow, Meghan?

MCCAIN: Blood on your hands, Rand Paul. Anyway, there is a revisionist history with the Bush administration that I take intense umbrage with. The idea that oh, and I…I think great, Michelle Obama wants to be friends with him, but I remember all the things that were said about President Bush when he was in power.

MCCAIN: I remember people calling for his impeachment, a warmonger, lied about weapons of mass destruction, Hurricane Katrina.

MCCAIN: So, I think part of the issue for me is just confusion. Because did your opinion on Hurricane Katrina and the Iraq War change? And I think there has to be a level of consistency with your politics. I don’t blame Ellen; clearly, we have to go to a commercial break.

GOLDBERG: Not before I get in this time though.

GOLDBERG: No, no. Go ahead. Finish up.

MCCAIN: The revisionist history about President Bush, my husband says when you cry wolf with every Republican, which is what I believe happened with Bush, Romney, my father on forward; sometimes when you cry wolf, the beast shows up, and the beast is Donald Trump. So, I think part of the reason is maybe take a second look at some conservatives when you talk crap about them…

MCCAIN: …while they’re in power.

GOLDBERG: If…if there are some conservatives that have done some really good stuff.

GOLDBERG: George, for whatever it’s worth did a lot of stuff I didn’t like, but something he did do was he had a smart idea how to deal with immigration. I like that, and your…

GOLDBERG: …own party, and your own party pooped all over it, and it didn’t happen. So, when…you know, my feeling is this. It’s like when people got pissed off because Clinton was sitting next to Louis Farrakhan because it was set up that way. That’s what Aretha wanted. She had it set up the way she wanted to and that’s what it did. The man who owns the Cowboys sent tickets and she ended up sitting next to Bush. Now, these are two gay women. Now, if he’s got a problem, he’s going to be real uncomfortable. I would…I’d be leaning on him. I would be just hugging him. I would be messing with him because if you have the opportunity to take a second to show people your humanity, why wouldn’t you try? Now, yeah. None of us are perfect. I have pooped all over stuff that I now know was probably not the best thing to do. I understand, but I think that if you…if you’re not going to give people the opportunity to at least try to change or try to grow, if you’re going to dump on everything they do because you think it’s bad, then maybe you should be living their life, and they should be living yours. That’s just weird to me, but that’s what you might want to do. We’ll be back.