Last week, NewsBusters reported on a new poll showing that, at the time they cast their ballot, many Biden voters were unaware of important news stories involving either their candidate or President Trump. A deeper dive into the data shows that the problem was especially acute among those Biden voters who said they typically depended on social media for their election news. 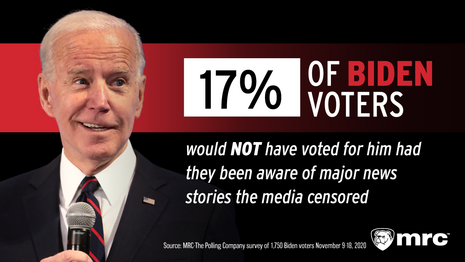 The Media Research Center asked The Polling Company to survey 1,750 Biden voters in seven swing states (Arizona, Georgia, Michigan, Nevada, North Carolina, Pennsylvania and Wisconsin), asking about their knowledge of eight news stories. We found that a huge majority (82%) of Biden voters were unaware of at least one of these key items, and one of every six Biden voters we surveyed (17%) told us they would have abandoned the Democratic candidate had they known about one or more of these news stories. Such a shift would have changed the outcome in all six of the swing states won by Joe Biden, and Donald Trump would have comfortably won a second term.

As part of that survey, we also asked these voters where they typically got their election-related news. As expected, cable news, online news sites, and broadcast news topped the list (with 32%, 23% and 22% respectively), but next in line was social media, with one in seven Biden voters (14%) saying they primarily relied on sites such as Facebook or Twitter for their election news. In fact, those using social media far eclipsed those who said they relied on a national newspaper (3%), a local newspaper (2%) or radio news (2%).

On every issue, those Biden voters who cited social media as their top source for election news were most in the dark about key issues. Importantly, there were no significant differences among other media types, which means that as bad as the establishment media were at covering the campaign fairly, those who said they relied most on social media knew the least about the issues before they voted. 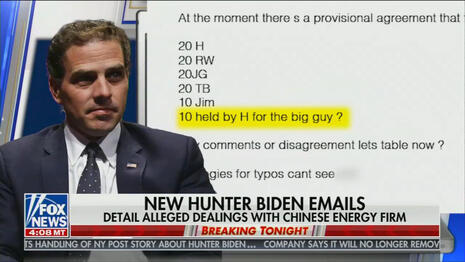 Nearly three-fifths (58%) of those who relied on social media said they were unaware of the Hunter Biden scandals, which Facebook and Twitter infamously tried to censor in the waning days of the campaign. In contrast, 43% of Biden voters who relied on other media (cable, broadcast, online, newspapers and radio) said they were unaware of these reports — a gap of 15 points, the largest on any issue.

Nearly 56% of Biden voters who depended on social media were unaware of the blockbuster economic report that showed the U.S. economy grew by a record-setting 33.1% in the third quarter, significantly more than the 48% who relied on other news media.

Almost as many of those who primarily used social media (55%) said they didn’t know about the historic peace deals engineered by President Trump between Israel and several of her Arab neighbors, far higher than the 41% who typically got their news from other news media sources.

Nearly half of Biden voters who relied on social media (47%) said they were not aware of the record-breaking 11.1 million jobs created between May and October, compared to 38% who got their news from other sources.

And 43% of the social media reliant said they didn’t know about the Trump administration’s success in encouraging coronavirus vaccines and treatments through Operation Warp Speed, compared to 35% who got their news elsewhere. 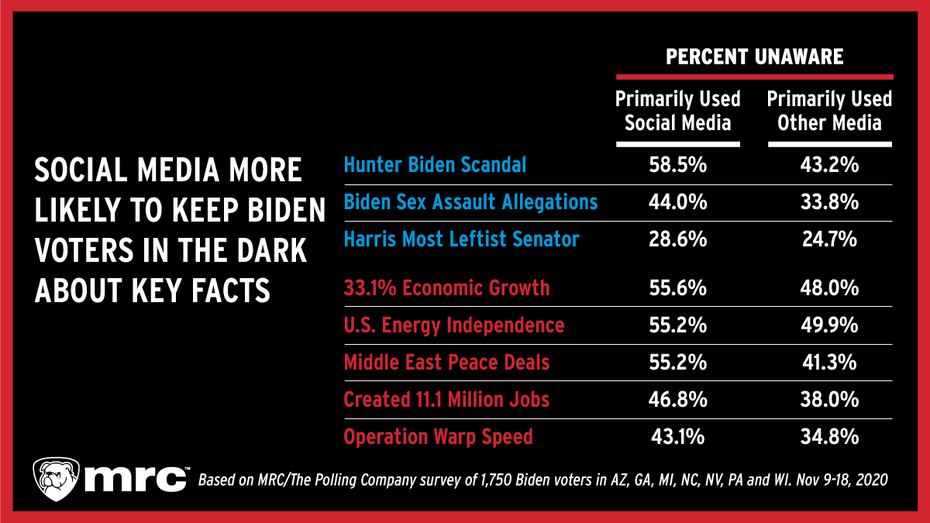 The gaps were narrower on the other issues we asked about (the Trump administration’s success in making the U.S. energy independent, and the fact that Democratic vice presidential nominee Kamala Harris had been ranked as the most left-wing Senator in 2019, outranking even self-described socialist Bernie Sanders), but those who said they primarily relied on social media were still worse off than those who relied on other sources.

One other tidbit from this poll: Of those Biden voters who said they primarily received their election news from cable, most said they watched CNN (55%), followed by MSNBC (24%), with Fox News in third place (13%). Another seven percent named a different cable station.

In this respect, Biden voters are out of step with the general public. In October, at the height of the election, Fox News scored 4.9 million viewers, according to Nielsen Media Research, far outpacing MSNBC (2.7 million) and CNN (2.4 million).

For this report, The Polling Company conducted a national survey of 1,750 individuals living in Arizona, Georgia, Michigan, Nevada, North Carolina, Pennsylvania and Wisconsin who reported voting for Joe Biden in the 2020 election.