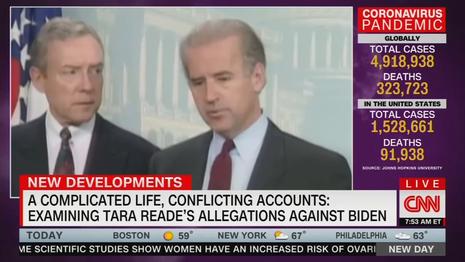 While liberal TV news outlets have fallen all over themselves in a rush to disapprove of anything involving Donald Trump, they’ve kept their airwaves largely free of any negative stories about his Democratic challenger, Joe Biden. In fact, it’s been more than a month since ABC, CBS, CNN, MSNBC or NBC have even mentioned the accusations of Tara Reade, a former Biden staffer who alleges that he sexually assaulted her in the 1990s.

MRC analysts have looked at all broadcast and cable news coverage since the charges against Biden first surfaced on March 25. After a brief amount of coverage in April and May, and despite corroboration of Reade’s account, all of these networks dropped the story entirely.

As of June 28, ABC has gone 33 days without mentioning the allegations against Biden. The two liberal all-day cable networks are even worse: CNN hasn’t talked about the case in 35 days, while it’s been 37 days for MSNBC. NBC hasn’t told viewers about Reade’s charges since May 10 (49 days ago), and CBS hasn’t said a word on air since May 8, 51 days ago. 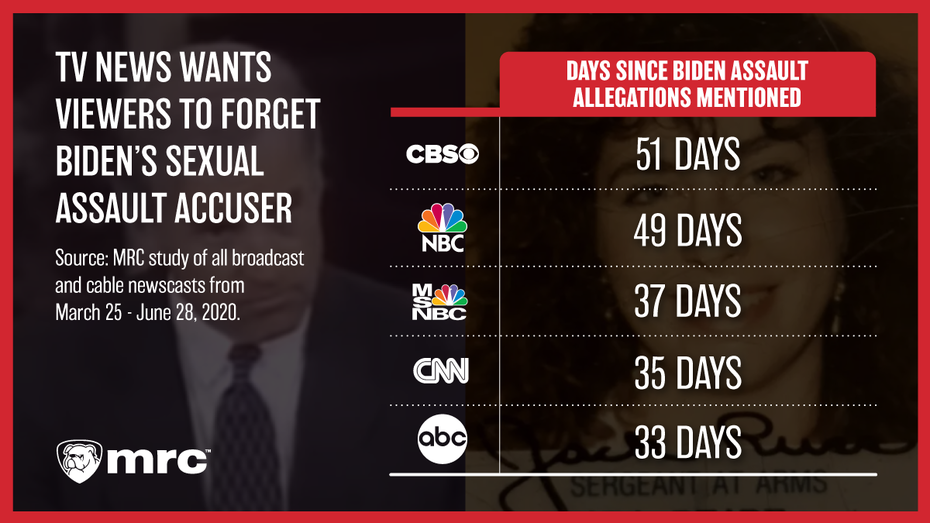 It’s not as if there hasn’t been anything to report in all of these days. The Reade case has yet to be resolved, and new information has continued to come to light. So what news have these networks concealed over the past month?

On June 7, The National Interest reported that a man who knew Reade during law school had come forward as the eighth person “to corroborate aspects of her accusations against 2020 presidential candidate Joe Biden.” The TV news media ignored the report entirely.

Two prominent Democrats have also stated on the record that they believe Reade. On May 26, Congresswoman Ilhan Omar (D-MN) told ABC that “parts” of Reade’s story had been corroborated, adding that it was “important” to “believe survivors.” No other network covered Omar’s statement, and that interview was the last time Reade’s name came up on ABC.

The liberal media’s blackout on Reade now matches their ongoing partisan approach to the story: both CNN and the broadcast networks took over a month to cover her allegations to begin with. When they finally did get around to discussing her claims, much of their time was spent on Biden’s denials.

The fourth estate’s handling of Tara Reade’s allegations has been calculating and overtly political from the start. In a campaign season where some journalists have promised they’d support Biden “even if he boiled babies and ate them” and called for his “coronation,” is it really any surprise that the TV news media have scrubbed his biggest scandal from their airwaves?