Trump Brings Peace to the Mideast, Petty Networks Won’t Let Him Have a Win 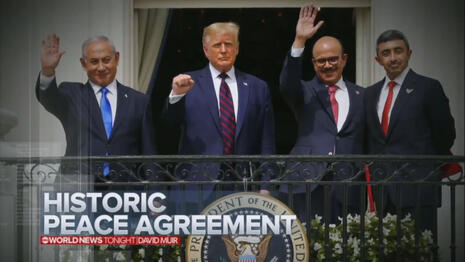 Imagine if Barack Obama had put together a string of mideast peace deals like Donald Trump has in just the last month. The headlines, “Obama Brings Peace to Mideast,” would be everywhere.

So with President Donald Trump set to address the United Nations on Tuesday, having orchestrated historic peace agreements between Israel, the UAE and Bahrain, surely even the liberal broadcast evening news networks would be compelled to acknowledge their historic importance.

So how much time have the Big Three network (ABC, CBS, NBC) evening news programs devoted to these massive foreign policy wins?

A paltry 9 minutes and 8 seconds. And that’s for all three evening newscasts combined.

MRC analysts looked at 33 days of ABC’s World News Tonight, CBS Evening News and NBC Nightly News programs from August 13 (when Israel and the United Arab Emirates announced they were establishing full diplomatic relations) to September 15 (the joint signing ceremony of the Abraham Accords between Israel-UAE-Bahrain at the White House) and found just brief hiccups of coverage surrounding the days of the announcement of those deals and then the signings.

CBS Evening News barely covered the events, devoting just a total of 144 seconds to the historic deals. NBC Nightly News managed to carve out 155 seconds to the mideast peace agreements, while ABC’s World News Tonight led the way with a still meager 249 seconds of broadcast time.

But even in the short amount of time given to these landmark agreements, network correspondents managed to sneak in snide shots as they belittled all the hard work of the negotiators.

Driven by the desire to deny Trump a victory of any kind leading up the election, the networks twisted the facts and played word games. Such as CBS White House correspondent Paula Reid, who put on a condescending teenager's attitude when she declared: “But it’s more of a business deal than the peace accord. The three countries are not engaged in armed conflict.” CBS Evening News anchor Norah O’Donnell set out to paint the historic peace deal as a failure from the get-go. “But before the ink was dry, there were already signs that Israel still has enemies in the region and they aren't celebrating,” she boasted at the top of the segment, as if the signers were the ones fighting.

“And at the White House, today, Israel and two Arab nations signed a new diplomatic agreement that will normalize relations and bring them closer together. But as Andrea Mitchell reports, a broader Middle East peace is still an elusive goal,” proclaimed NBC anchor Lester Holt, setting the tone. For her part, Democratic Party fan girl Andrea Mitchell was exceptionally bitter about the day’s events. “But today's agreements open the doors for trade, travel, and tourism. But it is not Middle East peace,” she exclaimed. “Left out, the Palestinians, abandoned by their Arab neighbors, powerless to do anything but protest.” “And the President can portray himself as a peacemaker, he says worthy of a Nobel Prize,” Mitchell scoffed.

The Israel-UAE-Bahrain peace agreements are just the latest in a series of big wins in the Middle East for the administration that the nets have either downplayed or ignored.

Back in February a terrorist leader Qassim al-Rimi, who vowed to attack the United States was killed in a military strike.

On February 7 CNN.com reported the following:

The White House announced Thursday evening that Qassim al-Rimi, the leader of terror group al Qaeda in the Arabian Peninsula, was killed in an airstrike in Yemen. CNN reported last week that the US conducted a strike targeting Rimi, who led the terror group's franchise based in Yemen that has repeatedly expressed interest in conducting attacks targeting the United States, a US official said….Rimi’s “death further degrades AQAP and the global al-Qa’ida movement, and it brings us closer to eliminating the threats these groups pose to our national security,” the White House said in a statement Thursday….Rimi, formerly AQAP’s military chief, reportedly became the group’s leader following a 2015 drone strike that killed Nasir al-Wuhayshi. Rimi issued a video soon afterward calling supporters to attack the United States, urging that “all of you must direct and gather your arrows and swords against it.” Many observers have considered AQAP among the most dangerous, if not the most dangerous, branch of al Qaeda since its formation in 2009. The group claimed responsibility for the 2015 attack on the offices of French magazine Charlie Hebdo in Paris that killed 12 people.”

Sympathy for the Devil: Nets Mourn Loss of “Heroic” Soleimani

The killing of Iranian military chief Qassem Soleimani was too big of a story for the network evening news shows to ignore, but even then correspondents covered it as a reckless decision by Trump to remove Iran’s “national hero,” as opposed to a worthy action that ridded the region and the world of a terrorist menace.

On the January 3 NBC Nightly News, correspondent Richard Engel actually tossed flowers at the departed Solemani: “Qasem Soleimani was no ordinary general. The U.S. classified him as a terrorist but in Iran, he was a national hero. Specifically, Soleimani was in charge of spreading Iranian influence around the world, and he was extremely good at it. Smart, charismatic, ruthless and bold, Soleimani knit together a loyal network of armed groups from Iraq to Syria, Lebanon to Afghanistan.”

On the same program, Engel’s colleague, NBC News Tehran bureau chief Ali Arouzi, passed along Iranian state propaganda: “Soleimani was a cult figure. There is a real sense of shock here. State TV is commemorating him on a loop and one general even wept after the news of his death.”

Over on the January 3 World News Tonight substitute anchor Whit Johnson eulogized the “revered” “architect” of Iranian “intelligence and military operations”: “General Qassem Soleimani, the architect of Iranian intelligence and military operations across the region for decades. A revered figure day in Iran, today, thousands mourning and protesting in Tehran. Iran’s supreme leader vowing harsh retaliation and revenge from the death of a man he called a martyr.” 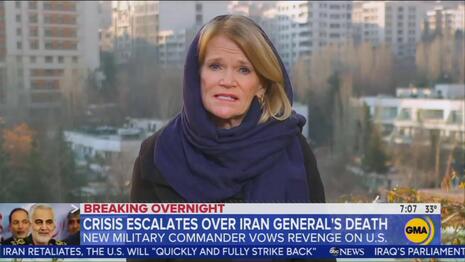 Reporting from Iran, correspondent Martha Raddatz repeated how much Soleimani was revered, and added how much “outrage” Trump had stirred up: “Targeting Soleimani is seen as a massive escalation in the President's confrontation with Iran….Today in Iran, where Soleimani was one of the most influential figures, revered by many, there was outrage. Thousands taking to the streets chanting, ‘down with America’ and ‘revenge, revenge.’”

A few days later on the January 6 ABC World News Tonight, Raddatz acted more like a reporter for Iranian State TV as she advanced the anti-American rhetoric in the streets: “In Iran today, an ocean of people taking to the streets. More than a million mourners, many dressed in black, grieving the death of General Qassem Soleimani. Numbers not seen since the funeral of an ayatollah in the 1980s. Soleimani’s coffin carried high above their heads today. This procession so packed you can barely move, but the emotion is everywhere. People have a very strong message for America. They are chanting, ‘death to America.’ Others here burning the stars and stripes. Inside the funeral service, tears from Iran’s supreme leader. And amid the grief, calls for revenge.”

Raddatz even interviewed one of the anti-Trump protesters:

Protester: “Trump made a big mistake. He killed our hero. Revenge must happen, and it is certain.”

Raddatz: “What kind of revenge do you want?”

Sadly, Raddatz’s reporting was typical of the evening news coverage this year of Trump’s mideast accomplishments. Big Three anchors and correspondents were so resistant to give Trump any credit, they’d rather hand the mic over to America’s haters than to even momentarily depart from their anti-Trump narratives.