With virtually no chance Senate Republicans will vote to remove President Trump from office, House Democrats’ drive for impeachment is more likely aimed at creating a deluge of negative daily headlines hoping to cripple Trump going into next year’s election. If that is indeed Democrats’ goal, then the three broadcast networks are doing everything they can to help achieve this partisan objective: 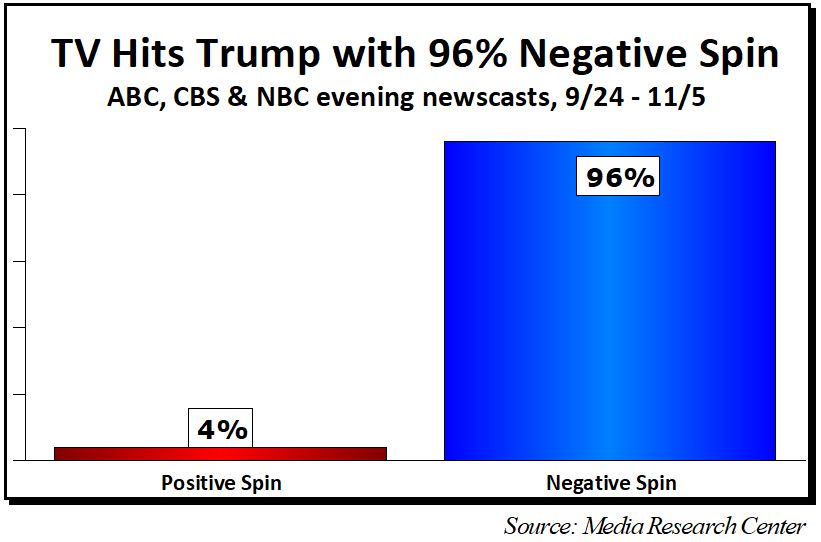 ■ Overwhelmingly Negative: MRC analysts have reviewed all coverage of President Trump and his administration on the ABC, CBS and NBC evening newscasts since 2017. Following the beginning of the impeachment inquiry on September 24, this coverage has been even more hostile than normal: Out of 684 evaluative comments included in these broadcasts, a whopping 96 percent have been negative, vs. a meager four percent that have been positive.

(Methodology: To determine the spin of news coverage, our analysts tallied all explicitly evaluative statements about the President or his administration from either reporters, anchors or non-partisan sources such as experts or voters. Evaluations from partisan sources, as well as neutral statements, were not included.)

■ All About Impeachment: TV’s fascination with Democrats’ impeachment push has crowded out nearly all other news about the administration. During the six weeks since Speaker of the House Nancy Pelosi announced the start of the inquiry (September 24 through November 5), the ABC, CBS and NBC evening newscasts churned out 398 minutes of coverage to the Ukraine scandal, or more than three-fifths of all administration news during this period (645 minutes).

This nearly matches the 438 minutes of airtime these newscasts produced during the most hyper-intensive six weeks of the Russia “collusion” scandal, starting when the President fired James Comey as FBI Director on May 9, 2017 (and media talking heads began railing about Trump’s “Watergate”) through June 20 of that year — weeks that also included the appointment of Robert Mueller as special counsel on May 17 and Comey’s much-ballyhooed congressional testimony on June 8.

■ Secret Sources: With most of the developments behind closed doors, the majority of the networks’ impeachment coverage has been based on secret leaks from anonymous sources. Out of 172 news reports, a large majority (59%) relied on unnamed sources for their facts about the impeachment probe. This is slightly higher than when we first checked in late October, when 57 percent of impeachment stories used anonymous sources.

■ Even Negative Spin on Baghdadi Death: Only two other Trump administration topics have been granted much airtime since the inquiry began: the successful U.S. mission that led to the death of ISIS leader Abu Bakr al-Baghdadi (45 minutes before it faded from the newscasts), and the earlier decision of the President to pull U.S. troops out of northern Syria (121 minutes).

The withdrawal of U.S. forces was given witheringly (98%) negative coverage on all three networks, whose journalists routinely framed it as “abandoning” an ally (the Syrian Kurds) in the fight against ISIS. 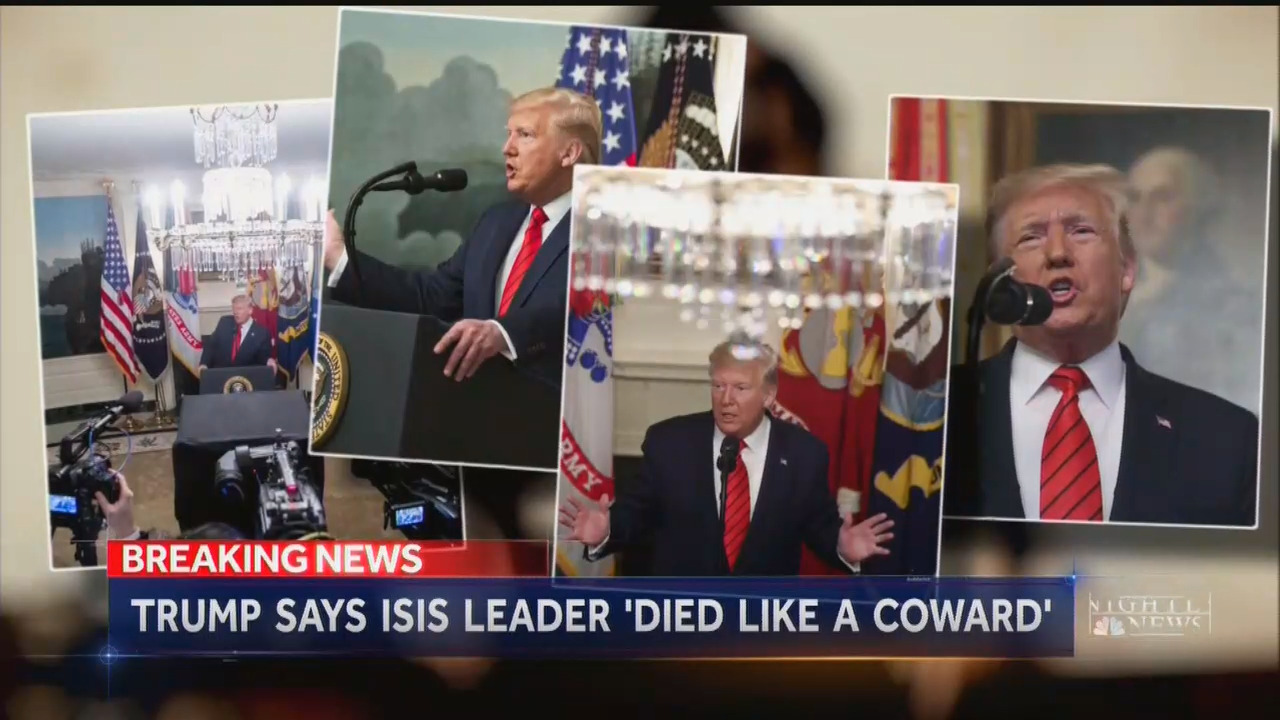 But while media coverage of the U.S. mission against al-Baghdadi was mostly positive, the President’s role in it was not. Out of nine evaluative statements about the President himself, two-thirds (67%) were negative. These focused on his refusal to brief congressional leaders, as well as his belittling description of the cruel ISIS leader’s last moments (“He died like a dog....He died like a coward....Whimpering, screaming and crying.”)

“It’s possible that President Trump’s bellicose language about the manner in which he died could actually inspire some ISIS fighters to retaliate,” NBC’s Courtney Kube speculated on the October 27 Nightly News.

■ Silent on Economic Success: Despite record highs in the stock market and a fifty-year low in the unemployment rate, the President’s handling of the economy was given a stingy 4 minutes, 6 seconds of airtime during these six weeks, or less than one percent of all Trump administration news (645 minutes).

■ Impeachment Diverting Airtime from 2020 Democrats: TV’s heavy coverage of impeachment has essentially smothered coverage of the Democratic presidential race, which drew a meager 110 minutes of coverage during these six weeks — barely a third of the airtime granted to the 2016 campaign during these same weeks in 2015 (312 minutes).

Nearly half of this year’s campaign coverage (51 minutes) was about Joe Biden, his son and the Ukraine, leaving only 59 minutes for non-impeachment related topics. The next most-covered campaign event, Bernie Sanders’ heart attack, drew just 16 minutes of airtime.

■ Boosting Biden: But when it came his Ukraine dealings, Biden has received the best press of his campaign (71% positive), as some journalists repeated a mantra that “there is no evidence of any wrongdoing” (ABC’s Jon Karl, September 24), while others traveled to the Ukraine to make the same point. “Did you ever see any evidence of wrongdoing by Joe Biden,” CBS’s Roxana Saberi asked an ex-deputy prosecutor. “Never, ever,” came the reply.

Thanks to MRC Research Analyst Bill D’Agostino for the valuable research assistance he provided for this report.