Despite the unreliable nature of anonymous sources, the three major broadcast networks (ABC, CBS, and NBC) have used them in nearly three fifths of their news reports about the impeachment probe since it first began, mostly to pass along damning accusations against the President that cannot be independently verified.

From September 24 — the day the impeachment inquiry was announced — to October 24, these three broadcast networks devoted 322 minutes to the probe in their evening newscasts, across 140 separate news segments. Of those, more than half (82, or 57%) relied at least in part on information from anonymous sources: 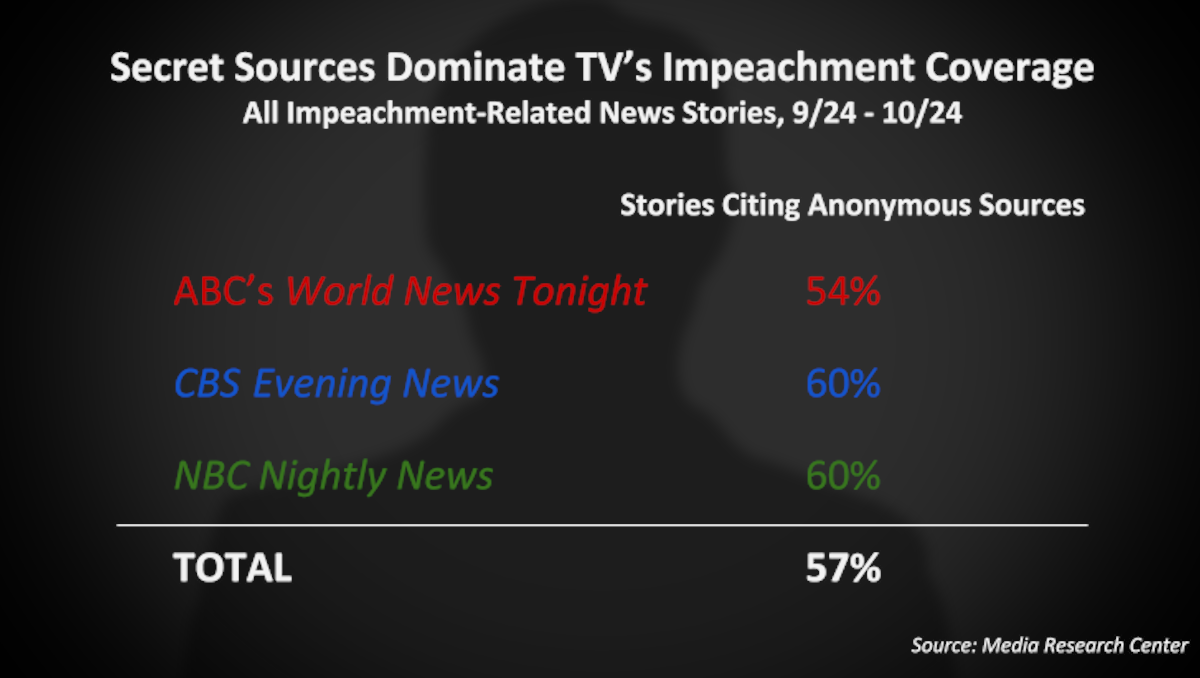 A policy piece by the Society of Professional Journalists cautions strongly against the use of anonymous sources, noting: “Some organizations do not allow anonymous sources except in the most vital news stories.”

The New York Times stylebook similarly deems anonymity “a last resort,” warning: “Anonymity must not become a cloak for personal attacks. The vivid language of direct quotation confers an unfair advantage on an unnamed speaker, and turns of phrase are valueless to a reader who cannot assess the source.”

Put another way, every source who talks to a reporter is promoting the facts and spin that best reflects their agenda. When President Trump or House Speaker Nancy Pelosi speaks on camera, viewers can make up their own minds about how much to trust what is said. But when a source hides behind the cloak of anonymity, that source's agenda is also hidden from the audience.

Nonetheless, viewers of broadcast evening news this past month were bombarded on a near-nightly basis with anonymously sourced reports about the ongoing closed-door impeachment inquiry.

The NBC Nightly News on October 3 led off with the congressional testimony of Kurt Volker, a former U.S. Envoy to Ukraine. The segment relied on reporting by The Washington Post, which, in turn, cited conversations with “two people” who were “familiar” with what Volker had told lawmakers. This resulted in the following third-hand reporting by NBC White House correspondent Peter Alexander:

Behind closed doors, Volker, The Washington Post reports, told lawmakers that he warned the President’s personal lawyer, Rudy Giuliani, that he was receiving untrustworthy information from Ukrainian political figures about the Bidens, according to two people familiar with his testimony.

On October 8, ABC chief White House correspondent Jonathan Karl led off World News Tonight with a quote from an anonymous source, relayed secondhand by a separate anonymous source, which characterized President Trump’s phone call with the President of Ukraine as “crazy,”:

ABC News has learned a White House official who listened in on the President’s phone call with the President of Ukraine described it as crazy and frightening. This according to the whistleblower.

The following evening, CBS chief Washington correspondent Major Garrett described that phone call in an even more roundabout way.  Garrett reported on one anonymous source’s description of a memo written by a second anonymous individual, in which it was alleged that a third anonymous individual, who claimed to have listened to the phone call, contended that the call had been unrelated to national security:

According to the memo described to CBS News, the White House official characterized the call as ‘completely lacking in substance related to national security.’

Because this impeachment inquiry is unfolding behind closed doors, journalists have relied heavily on leaks — provided on the condition of anonymity — which audiences have no means of verifying. The result is a deluge of hearsay reporting that looks more like a game of telephone than serious journalism.

Thanks to MRC news analyst Nick Fondacaro for his assistance with the research for this study.