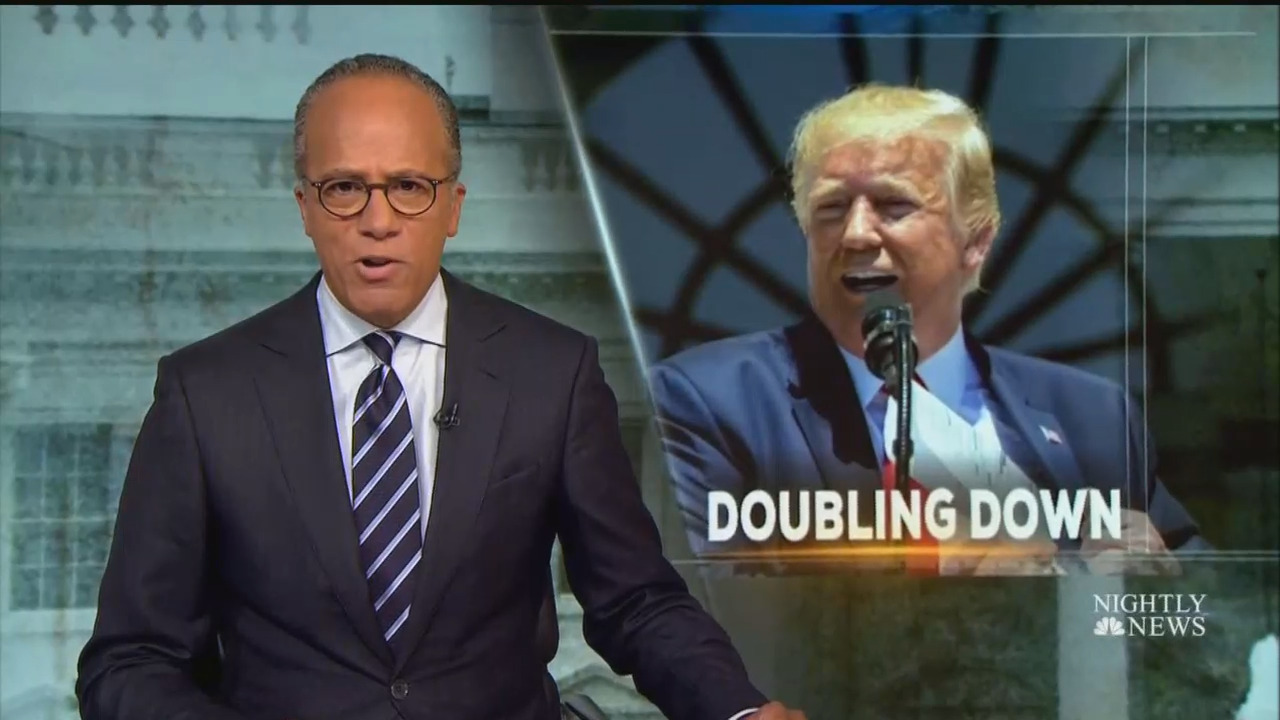 Much as they were four years ago, the Big Three evening newscasts continue to be obsessed with Donald Trump, pounding him incessantly with highly-negative coverage. But then as now, the networks’ fixation on Trump seems to be leaving comparatively little airtime for his would-be presidential challengers.

From June 1 through August 31, MRC analysts found the networks devoted 838 minutes of airtime — nearly 14 hours — to coverage of President Trump personally, the vast majority of which was negative. (Note: This report only examines coverage of Trump himself, not generic stories about his administration’s activities or those of other top-ranking officials, which accounted for an additional 213 minutes of evening news airtime.) 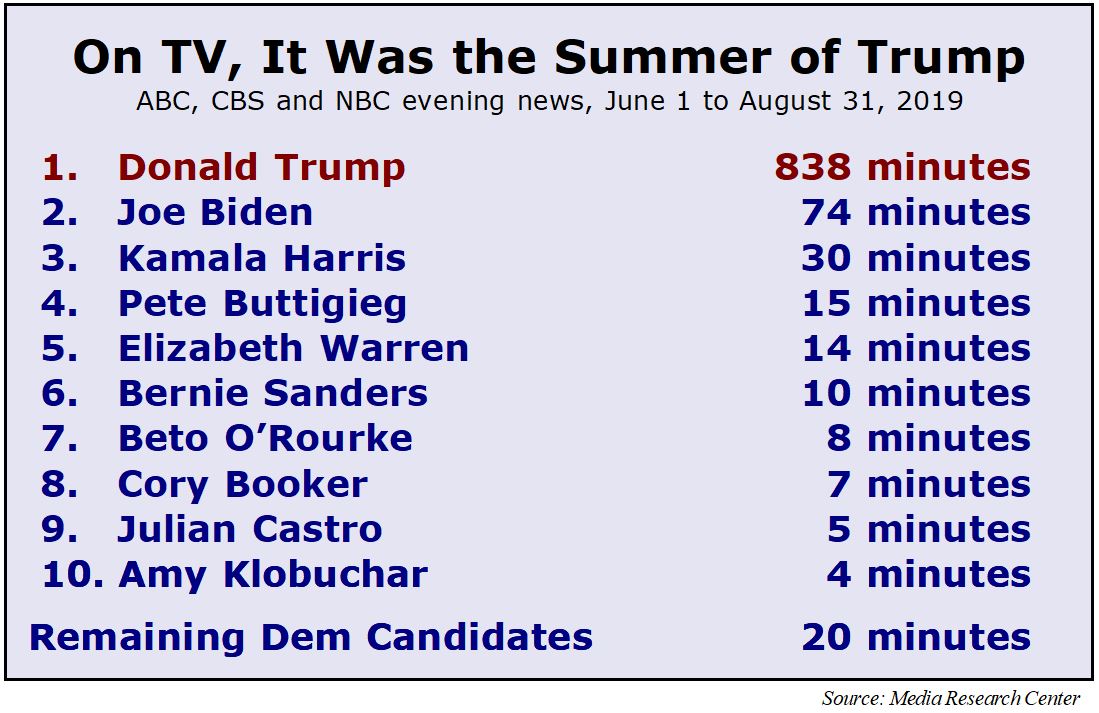 Overall, 21 Democratic candidates (including some who have since departed the race) shared 187 minutes of evening news airtime this summer, less than one-fourth of that of Trump alone. On the GOP side, former Congressman Joe Walsh received a scant 35 seconds of coverage after he announced his candidacy in late August, while the campaign of former Massachusetts Governor William Weld has yet to be acknowledged by any of the three evening newscasts.

Clearly, this heavy coverage is not intended to boost Trump. Overall, the spin of his coverage during these three months was 90% negative, roughly the same as we’ve found throughout his presidency. (Methodology: To determine the spin of news coverage, our analysts tallied all explicitly evaluative statements about the President or his administration from either reporters, anchors or non-partisan sources such as experts or voters. Evaluations from partisan sources, as well as neutral statements, were not included.)

The networks spent much of their time on alleged scandals and accusations of racism. During the past three months, evening news viewers saw an additional 82 minutes on the Russia investigation (bringing the all-time total up to 44 hours, 43 minutes), but coverage plunged after former Special Counsel Robert Mueller’s testimony in late July. Evening news coverage of the so-called “collusion” scandal sank from 46 minutes of airtime in July to less than eight minutes in August. But the idea of Trump’s “impeachment” was floated in 35 stories between June 1 and August 31. 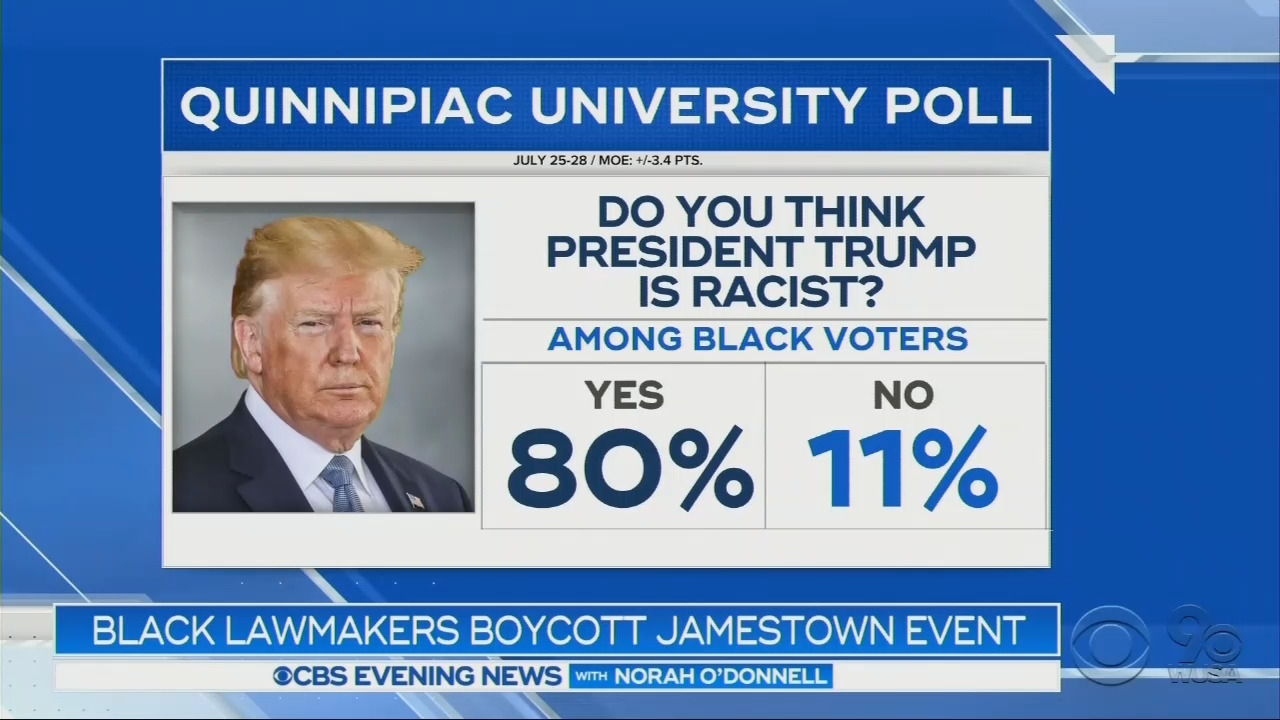 Network reporters seemed especially interested in topics they claimed showed the President displaying racial insensitivity, spending nearly 74 minutes on Trump’s feud with the far-left “Squad” of Democratic Congresswomen, and another 25 minutes on his antagonistic tweets aimed at Democratic Representative Elijah Cummings. An additional 22 minutes was spent serving up theories that Trump inspired the mass shooting in El Paso, Texas, as well as recalling his response to the 2017 violence in Charlottesville, Virginia and his quest for Barack Obama’s birth certificate. 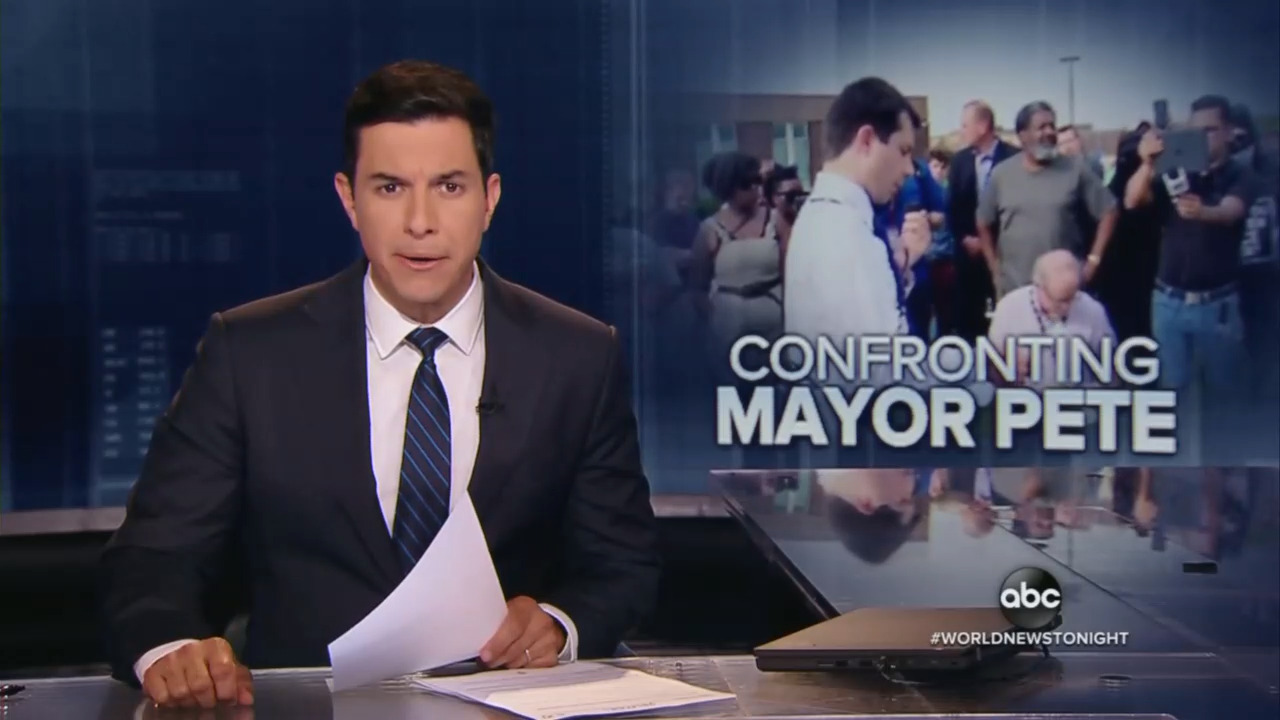 On the Democratic side, only Joe Biden and Pete Buttigieg faced any significant coverage of negative controversies, both about race. Biden drew 13 minutes of coverage for his maladroit statement about working with segregationist Democrats decades ago, plus another seven minutes of coverage about his stance on forced busing in the 1970s. The networks spent about nine minutes on local protests against Buttigieg’s handling of race relations as mayor of South Bend, Indiana.

The network spin on the Democrats was friendlier than their coverage of the President, but it was still more negative than positive: 63% negative, vs. 37% positive. (Note that these statistics exclude all “horse race” statements about a candidate’s poll standings or likely prospects in the campaign, but are instead evaluative statements about their merits, i.e., their policy positions, job performance, campaign conduct or character.)

Only four of the Democratic candidates drew enough airtime for us to present individual statistics, with Kamala Harris faring the best (86% positive, mostly rave reviews for her June debate performance), followed by Elizabeth Warren (50% positive). Biden and Buttigieg had the worst press, with Biden receiving 72% negative coverage, and Buttigieg receiving 100% negative press (all statements about the racial turmoil in his home city).

The media mania over Trump is more intense than that of four summers ago, but the pattern is similar. After Trump joined the race in mid-June 2015, he immediately dominated network news coverage with 232 minutes of airtime, twice that of the leading Democrat, Hillary Clinton, and six times more than his nearest Republican challenger, Jeb Bush. 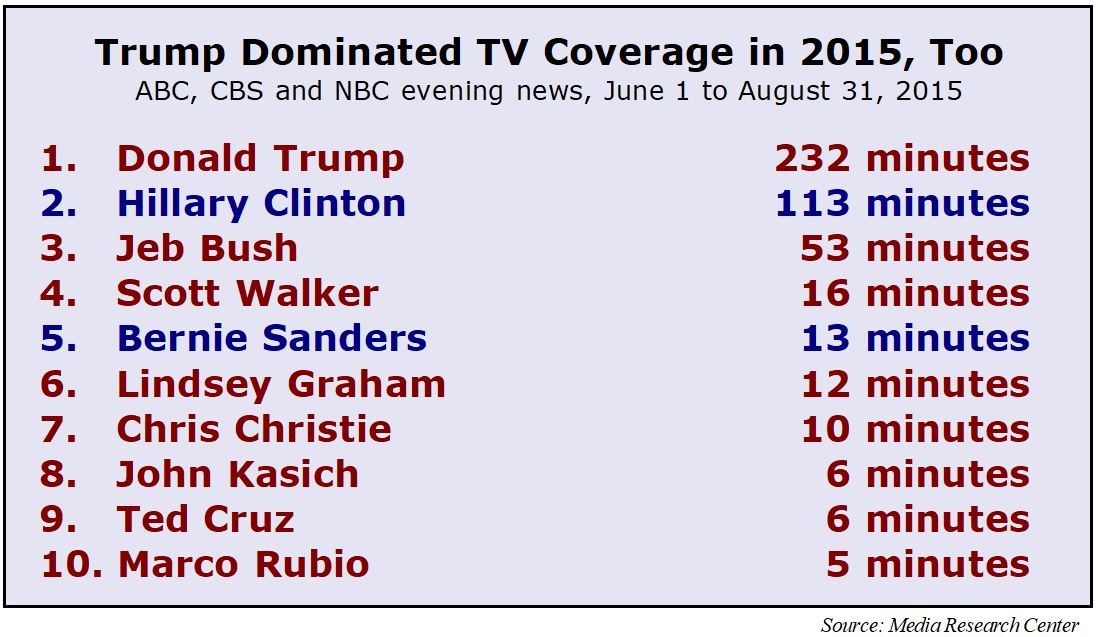 No other candidate received even one-tenth as much coverage as Trump did that summer. Democratic socialist Bernie Sanders, who would go on to win 22 state caucuses and primaries in 2016, received just under 13 minutes of evening news coverage in the summer of 2015 — but that’s actually better than the 10 minutes he received this time around.

Then as now, TV reporters stressed Trump’s negative controversies: 28 minutes on the candidate’s crude comments about Fox News host Megyn Kelly; 29 minutes on Trump disparaging the hero status of Arizona Senator John McCain; and 41 minutes decrying his announcement-day remark that Mexico was sending “rapists” to the United States; plus a myriad of less-covered controversies.

In retrospect, it seems likely that the networks’ incessant pounding of Trump in 2015 actually aided his candidacy, with the other candidates shoved to the sidelines as journalists jumped into the fray themselves. Since then, Trump has dominated political news like no other figure in the media age.

The question for 2020: Will the anti-Trump media’s attempt to kill his re-election campaign with massive and poisonous press coverage again boomerang?