Now online: the October 12 edition of Notable Quotables, MRC’s bi-weekly compilation of the latest outrageous quotes in the liberal media. This week, Hillary Clinton is treated to fawning tributes and softball quesions during her “town hall” forum on NBC’s Today, while network reporters finger the “far right” as at fault in the surprise resignation of House Speaker John Boehner.

Plus, CNN’s Christiane Amanpour claims some in the GOP are part of a “war on Muslims,” and ex-CBS newsman Dan Rather is sticking to his bogus story: “There is no doubt in any reasonable person’s mind now, the story was true.” Highlights are posted below; the entire issue is posted online with 21 quotes at www.MRC.org. 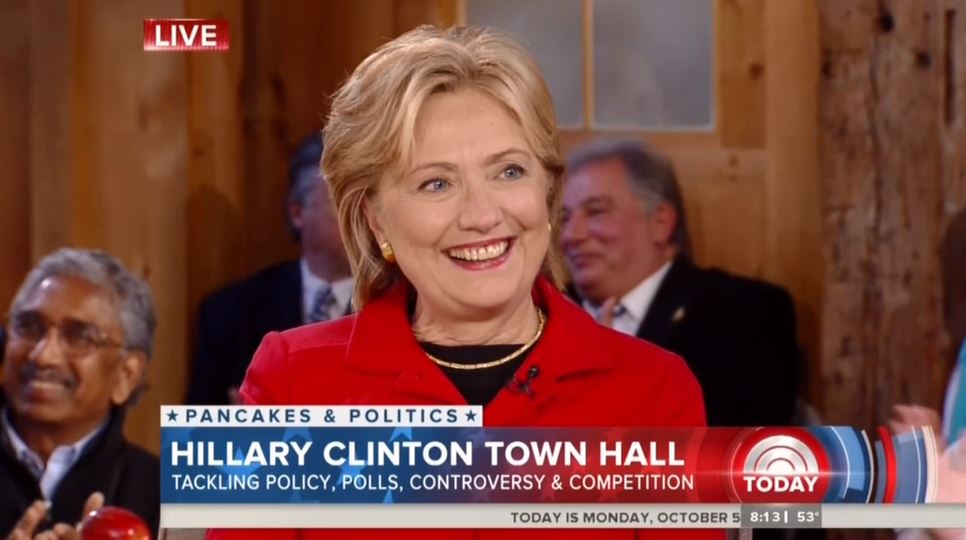 “I’m very distressed about the recent mass shooting last week in Oregon, and frankly a bit ashamed about the uncontrollable gun violence in our country....I would like to know, as President, what specifically you would do for gun control?”
“Secretary Clinton, you’ve had a lot of tough questions this morning. This may be the toughest one you get all day. But many years ago we saw another Clinton at his inauguration play an instrument and have a song. What song or instrument would you play at yours?”
“In order to make government work there needs to be cooperation, there needs to be compromise, there needs to be consensus. Honestly, is there anyone left in the Republican Party — I’m talking about the Senate and the House — who you can work with? I mean, you’re not going to be able to do most of what you want to do by yourself. Who’s there? Anyone?”
“Well, first, I want to thank you for your candidacy. You’re such a role model for women my age, and so thank you for putting yourself out there. So in your e-mails, you told [Democratic] Senator [Barbara] Mikulski you guys should go out and celebrate with something unhealthy to drink, so I’m wondering what your favorite celebratory unhealthy drink is.”
— A few of the audience questions during NBC’s “town hall meeting” with Hillary Clinton, October 5 Today.

“Mr. Speaker, you made no secret of your frustration with some members of your far right flank and some outside groups. You’ve used words like ‘knucklehead,’ and some other words we probably can’t use on television. Had you just had enough, and how will anything be different for the next Speaker?”
— CBS News congressional correspondent Nancy Cordes to Boehner at his live press conference, September 25.

Long-Suffering Boehner Had to “Put Up” with Tea Party

“Mark Murray, who covers politics for MSNBC and NBC News, also with us. Mark, talk about what John Boehner has had to put up with that is unique to his Speakership. I guess I’m mostly thinking of the Tea Party revolution.”
— Former NBC Nightly News anchor Brian Williams during MSNBC’s live coverage, September 25.

Matthews Cheers: Obama’s Going to Be a “Post-Presidential Mandela”

Clip of Senator Harry Reid: “We extend our sympathy, our best wishes.”
Correspondent Nancy Cordes: “Sympathy and best wishes are about all that the victims’ families can expect from Congress, which has not seriously debated strengthening gun laws since 2013, after 20 children and six adults were killed at Sandy Hook Elementary in Connecticut. But even then, the Senate easily defeated legislation that would have increased punishment for gun trafficking and expanded background checks, something 88 percent of Americans say they support....”
— CBS Evening News story on the Oregon college shooting, October 1.

Latest Shooting = Another Excuse to Rage Against Gun Rights

“One of our political parties is completely insane and it’s the party that, when we have mine disasters, blocks mine regulations. It’s the party that says, when we want to fix our roads, you can’t have an infrastructure bill, you can’t raise the gas tax....And we have the same party, which has somewhere between 300 and 600 people running for president, none of whom will do anything about the problem of mass shootings in America. So, I mean, I’m politicizing the hell out of this, and I don’t care.”
— Esquire’s Charles Pierce on MSNBC’s The Last Word with Lawrence O’Donnell, October 1.

“The National Rifle Association is responsible for America’s appalling culture of violence. It is the most invidious, vile, greedy, callous, selfish, brutal, uncompromising and nasty lobby group on the planet. The NRA doesn’t care how many people die, how many men, women and kids get blown to pieces.”
— Ex-CNN host Piers Morgan in an October 2 column in London’s Daily Mail.

PC Reporters Turn Their Wrath from Trump to Carson

Co-host Willie Geist: “A lot of people taking great offense to someone stepping back from the comfort of a presidential campaign and saying, ‘Here’s what I would have done,’ as nine people were shot, many of them reportedly asked what their religion was, when they said ‘Christian,’ they were gunned down.”
Co-host Natalie Morales: “Yeah. I mean, it’s beyond insensitive. It’s hard to hear that.”
— Exchange on NBC’s Today, October 7, talking about GOP presidential candidate Ben Carson’s statement that he would have challenged the gunman.

“You know, the only thing more alarming than Donald Trump leading the Republican presidential field is the fact that Ben Carson is the guy right behind him....The Good Doctor made it clear this week that he is not only willing to replicate Trump’s signature brand of hot-garbage-spewing, but he’ll say even DUMBER shit....You are now bearing witness to an arms race of stupid, because stupid is in such high demand from the GOP base at the present moment.”
— GQ columnist Drew Magary in an October 8 post headlined, “Fuck Ben Carson.”

“The top Republican candidates have decided to make a war on Muslims, you know, 1.5 billion members of another faith. And it must be a little bit weird to have that sort of discordance, you know, when this Pope is here talking about what makes America great — tolerance — and all the other issues that have made this country great.”
— Chief international correspondent Christiane Amanpour during CNN’s live coverage, September 24.

“We reported a true story....There wasn’t any doubt then, and there is no doubt in any reasonable person’s mind now, the story was true.”
— Disgraced ex-CBS Evening News anchor Dan Rather, talking about his 2004 story about George W. Bush’s National Guard service, as quoted in an October 7 story by The Hollywood Reporter’s Marisa Guthrie.

“Whenever I do an impression of someone, I have to love them. So, everyone I’ve ever done, I personally love. And for her, what I love is how badly she wants to fix the country, and I genuinely know that.”
— Saturday Night Live’s Clinton impersonator Kate McKinnon on ABC’s Live! With Kelly and Michael, October 1.