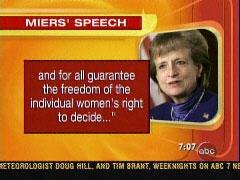 On ABC’s Good Morning America on Thursday, co-host Charles Gibson seemed mystified why a pro-life group would be disturbed by Harriet Miers’ formulation that the abortion debate is between those who would “criminalize abortions” or “guarantee the freedom of the individual woman’s right to choose.” Gibson thought that such liberal language was perfectly neutral: “That sounds to me, when I read it, as if she’s setting out alternatives and not taking a stand.”

His guest, Concerned Women for America’s Wendy Wright, told Gibson that someone who was genuinely pro-life would have framed the debate very differently: “Those who believe in the sanctity of human life speak in terms like that, respect for unborn children, respect for life. And so by her phrasing of criminalizing abortion as contrasted to freedom, that does speak to a philosophy that’s a bit troubling.”

ABC was hosting the conservative Wright because on Wednesday the CWA had called for Harriet Miers to withdraw as a nominee for the Supreme Court, something Miers did a little later on Thursday morning. But Gibson’s questions showed him to be flummoxed by a conservative approach to both the Court and the issue of abortion.

Gibson began the 7:07am EDT interview, as transcribed by the MRC’s Brian Boyd, by focusing on “new troubles for President Bush’s Supreme Court nominee, Harriet Miers. The group Concerned Women for America, one of the nation’s largest organizations of conservative women, is now urging the President to withdraw Miers’ nomination. So the question is, will other influential Christian conservative groups join the fight against her? Wendy Wright is Executive Vice President of Concerned Women for America and joins us this morning from Washington.

“Wendy, I know that part of your decision to urge the President to withdraw this nomination is based on the fact that a 1993 speech that Harriet Miers gave has now been given rather wide publicity. And I know the quote that you call in question, and I want to put it up on the screen. ‘Debate continues,’ this is what she said in 1993, ‘Debate continues surrounding the attempt to once again criminalize abortions or to once and for all guarantee the freedom of the individual woman’s right to decide.’ That sounds to me, when I read it, as if she’s setting out alternatives and not taking a stand. Do you see it differently?”

Wright told him that CWA wanted to support President Bush, but that these statements by Miers made such support impossible.

Gibson was still baffled: “But you take that quote as saying that she thinks that there ought to be an individual woman’s right to decide? I mean, as I say I see this as sort of laying out alternatives as opposed to taking a stand?”

Wright explained that Miers in her speech had framed the debate in exactly the terms preferred by liberal pro-abortion groups: “Those who believe in the sanctity of human life speak in terms like that, respect for unborn children, respect for life. And so by her phrasing of criminalizing abortion as contrasted to freedom, that does speak to a philosophy that’s a bit troubling.”

Gibson then asked about a different part of her speech, where Miers declared that abortion rights were a matter of “self-determination.” He insisted: “But in this speech, she comes out for self-determination. She believes people ought to have a right to decide for themselves. She doesn’t want the courts to legislate, which is what I always believed conservatives wanted.”

The issue with abortion, of course, is that the Court has made it impossible for the people, acting through their elected representatives, to regulate abortion. And the Court decision that elevated abortion to a constitutional right, Roe v. Wade, is regarded by many conservatives as one of the most outrageous examples of the courts “legislating from the bench.”

Gibson’s final question to Wright painted conservatives as ideologically greedy: “You made reference to the fact that four years before that speech she checked the box on a questionnaire saying she did want to support, she did not want, I’m sorry, I’m getting confused, that she wanted to support a ban to abortions. That’s not enough for you?”

Wright countered: “You have to look at both words and deeds. And, unfortunately, she seems to just reflect the opinion of the crowd that she’s speaking to at the moment.”