While reporting on Taylor Swift’s open letter to Congress regarding a drastic reform of the Digital Millennium Copyright Act, CBS This Morning focused the story primarily on how Swift, along with many other high-profile entertainers such as Paul McCartney and Trent Reznor, felt YouTube was exploiting the artists' music by not taking a more proactive role in targeting and removing videos and other content that play licensed music without explicit permission from the artist or their record company.

ANTHONY MASON: Good morning. Swift and her fellow artists published an open letter to congress calling today's digital copyright laws outdated saying they fail to protect artists' interests, but YouTube is firing back saying it's paid billions of dollars to record companies over the years and has secure safeguards in place to protect their copyrighted material. The reason for the bad blood with YouTube isn’t artist approved uploads like this official music video, it’s because of others use copyrighted music in unapproved videos they upload like underscoring a sad looking Ben Affleck with "The Sounds of Silence." More than 180 artists from Taylor Swift to Paul McCartney to Lady Gaga signed an open letter to congress asking for change, "The existing laws threaten the continued viability of artists to survive from the creation of music."

In 1998, the Digital Millennium Copyright Act gives services like YouTube a safe harbor from copyright infringement opportunities as long as they work quickly to remove protected content. But artist say services like YouTube are now overprotected, allowing "Major tech companies to grow and generate huge profits while artists' earnings continue to diminish." Musician Trent Reznor went even further saying, "YouTube is built on the backs of free stolen content."

ANTHONY MASON: Irving Azoff, who has managed artists ranging from the Eagles to Christina Aguilera, is spearheading the reform effort.

IRVING AZOFF: This is about the future of the business and the next generations and the next waves of people trying to make a living off of music.

ANTHONY MASON: YouTube argues it notified record companies when copyrighted music uploaded, and they order it removed. It says companies choose to leave more than 95% of the unauthorized content on line and pocket the licensing fees. In a statement to CBS news, YouTube says fan-uploaded content accounts for roughly 50% of the music industry's YouTube revenue. The company says it's paid out over $3 billion to the music industry. Insiders say it's in the interest of both the web and the music industry to find a compromise. 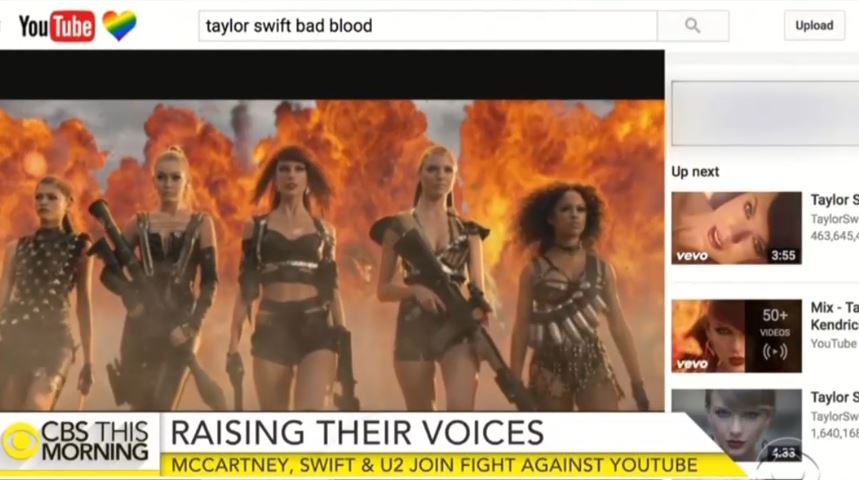 While one can make a case for the protection of intellectual property rights and reforming current copyright laws, what is peculiar is how these artists are incredibly concerned about other people using their songs without the artist getting a pay day, but when it comes to politics, the same artists are perfectly ok with other politicians going into your pocket book and spreading your wealth. Some of the artists who signed Swift’s open letter include a variety of individuals who have thrown their popularity and support behind progressive candidates and causes, some of the musicians include:

This list goes on, but the message remains that while these liberal musicians might be upset about not getting enough money from YouTube, they are perfectly fine promoting progressive tax policies that spread your wealth as long as they still keep their share at the end of the day.