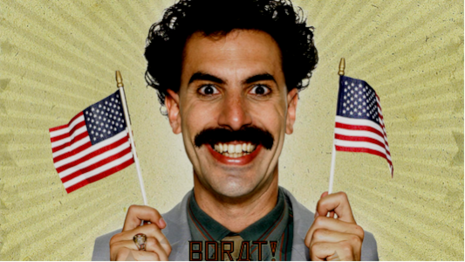 According to Tyler McCarthy at FoxNews.com, “The outlandish stunt comedian is forging ahead” with his “sequel to the 2006 comedy by taking advantage of the attention the first presidential debate of 2020 attracted.” Deadline.com noted that the sequel will be released in late October on Amazon Prime Video ahead of the presidential election.

In his typically outrageous fashion, Cohen began a false Twitter account for the "Republic of Kazakhstan" on September 27.

Then, on the night of the first debate, the account released a video mocking Trump as “a favored candidate” in that country:

Congratulation to great friend of the Kazakh people @realDonaldTrump for winning debate today! Impressive and amazing result for a strong premier who always put America and Kazakhstan first! pic.twitter.com/qLljQ8b5UU

As you might expect, the video begins with a voice speaking over clips of President Trump on the campaign trail and describing him as the “strongest premier in history.” Over footage of Kanye West at the White House and kneeling football players, he jokes "He not racist! Black guys love him so much they kneel before him." He jokes Trump went to war at 15 to make fun of his lack of military service. He mocked the coronavirus response by saying Trump's responsible for "350 million Americans still alive." It ends with "Vote for Premier Trump, or you will be crushed!"

Fellow Fox News Channel correspondent Jessica Napoli also reported that the sequel to the Borat film “was made very surreptitiously, with Cohen gathering a team to shoot as soon as COVID-19 restrictions were eased.”

“Our Housing Minister will be gathering a committee to move forward proposals for a new house building program to commence in the new year,” one tweet read.

However, after the video mocking Trump was released, the account began to skew more toward comedy, joking that people were unable to watch the full debate because “the WiFi it was stealing from neighboring Uzbekistan stopped working.”

McCarthy also noted that over the summer, the comic attempted to trick Rudy Giuliani into an interview that ultimately led to the former New York City mayor calling the police on him.