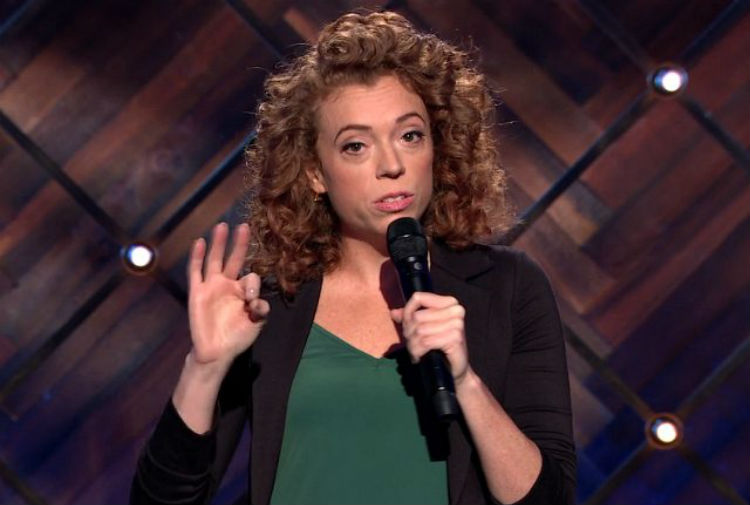 Far-left comedienne and failed Netflix talk show host Michelle Wolf has been out of the spotlight recently, but it’s obvious she is still REALLY angry at Donald Trump for remaining in the White House.

In case anyone doubted her hostility toward the President, she wrote an article for the liberal Daily Beast website, where she bizarrely accused the “mainstream media” of giving him “sweet, sweet oral satisfaction.” According to a story written by Ben Kew, a politics and national security reporter for the Breitbart News website, Wolf claimed that people in the media are helping Trump by providing “constant coverage of him and his administration.”

In the item entitled “The Media is Hopelessly Addicted to Trump,” Wolf asserted that instead of bringing the President down, the coverage “is in fact giving him the attention he craves.” Wolf asked: “So who’s been blowing Trump? Providing him sweet, sweet oral satisfaction?”

It’s all the contributors who go on those shows and make money for every temper tantrum they throw. They’re all satisfying Trump, and then wiping their mouths with the money they made.

“And it’s also YOU,” Wolf continued. “It’s you who’s reading this right now and watching all those shows because you can’t wait to hear how bad Trump is every ... day, like an ex ... you can’t get over. You’re not #resist, you’re #obsessed.”

Not surprisingly, the former Netflix host wondered if Trump is “the worst president America has had” while comparing him to previous GOP occupants of the White House, including “Richard Nixon’s War on Drugs and Ronald Reagan’s lackluster response to the AIDS crisis.”

Wolf also claimed that the current President is “just the first one that powerful white people cared was bad. And if there’s one group that is hoping he wins again, it’s the media. Both sides. And maybe some of you.” “It’s not often that privileged white people ... feel like the victim,” she noted. “I think the last time it happened was the Titanic.”

Kew also noted: “To be fair to Wolf, in the case of Donald Trump, she practices what she preaches,” as if that’s a good thing. The reporter then added: “Rather than endlessly going after the President, her targets have included his daughter Ivanka (who she described as a “vaginal mesh”), former White House Press Secretary Sarah Huckabee Sanders (mocking her “smoky eye” and general appearance), and ICE agents, who she compared to terrorists from the Islamic State.”

Of course, Kew added that the comedienne has “occasionally joined in the Trump hate fest.” In June of 2018, Wolf suggested comparing him to primates was “rude to apes.”

As NewsBusters reported that May, this isn't the first time Wolf has been slammed for using foul language. She did that while hosting the year’s White House Correspondents’ Dinner in Washington, D.C.