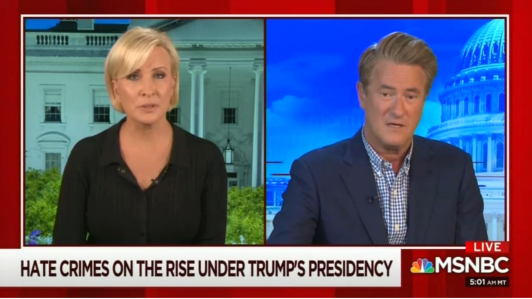 Husband and wife hosts Joe Scarborough and Mika Brzezinski attempted to bully Second Amendment supporter Dana Loesch on Twitter, Monday. But the conservative activist battled back, standing up to the liberal MSNBC hosts.  .

According to an article posted by Ken Meyer at Mediaite, the problem started when the Second Amendment activist began receiving death threats during the weekend in the wake of the mass killings in Ohio and Texas.

You’d think the people behind these verified accounts would do something more constructive like pray for the hurting or donate blood, instead of making it their top priority to bomb my email and incite a mob. What is wrong with you people?

The death threats you all are helping to incite are just awesome. Good job pretending to denounce violence with this hideous behavior.

Scarborough joined the fray on Sunday, when he stated: “You have a lot of nerve, inciting violence against my wife and me in an NRATV ad. Looking to camera after rolling one inflammatory clip after another and then ominously telling us: ‘Your time is running out.’”

“Seriously?” he asked. “You are shameless.”

Loesch quickly replied: “This is a shameful lie, Joe, and you have a lot of nerve with this malicious misrepresentation. It was literally an ad that featured a countdown to a special on media bias.”

Your NRATV ads incite violence. Even NRA board members were offended by the ads. That’s one reason the dangerous scam was shut down.

Those ads were intended to inflame violence and intimidate those not walking in lockstep with NRA’s D.C. lobbyists.

Loesch had a ready reply: “You mean the ad where actual footage of Antifa violence played while I condemned it in a VO (voice over)? More malicious representation, Joe. I’m not going to comment on an ongoing fight between two entities that had nothing to do with me.”

Brzezinski then jumped in, claiming:

We ask peacefully for no more threats from you or anything else. Please leave us alone.

Brzezinski was apparently referring to an ad from March of 2018, when Loesch was getting her own show on what was then NRATV. As part of her commercial, she says to journalists, celebrities, comedians and others from the other side of the political aisle: “Your time is running out.”

Nevertheless, the back-and-forth continued, with Brzezinski still responding and eventually tweeting: “Stop. I find your greedy, heartless, sick and deranged platform to be revolting. But more importantly, we will never forget the way you threatened us. Please leave us alone.”

It’s quite obvious that “the Morning Joes” want better treatment than they provide on a regular basis to their opponents, especially the Republican occupant of the White House.