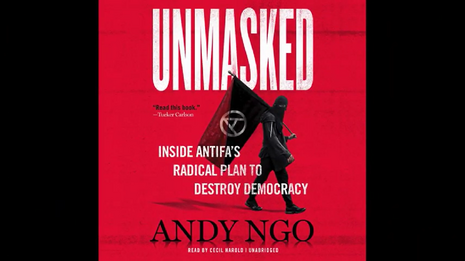 It appears that the Yahoo News White House correspondent, Alexander Nazaryan, has not changed his ground game in at least five years. In 2016 he compared Ted Cruz and his staff to Nazis. He was forced to delete that tweet after being publicly shamed for his over the top comparison but apparently he has not learned his lesson.

Nazaryan's latest shameful comparison runs along the same lines when he compared journalist Andy Ngo to Nazi propagandist Joseph Goebbels in his his latest review of Ngo's book Unmasked: Inside Antifa's Racial Plan to Destroy Democracy.

Not only does Nazaryan compare Ngo to the notorious Nazi, but he also absurdly downplays the dangers posed by Antifa to the extent of not capitalizing the name of that organization in both the text and title of his Los Angeles Times book review on Monday, "Andy Ngo’s new book still pretends antifa’s the real enemy."

First let us cut to the chase with Nazaryan's Goebbels comparison:

...Every act of violence by antifa, meanwhile, is described so meticulously and ominously that Herr Goebbels would have been proud.

And while Nazaryan goes over the top with his comparison of Ngo to Goebbels, he also completely underplays the dangers posed by Antifa which he portrays as basically harmless.

Ngo is singularly focused on inflating antifa’s importance. It is his black-clad white whale, his Marx-spouting Moby Dick.

Ngo’s fame, such as it is, stems from a June 2019 donnybrook in Portland, in the course of which antifa activists assailed him with a thrown milkshake. Ngo claimed the milkshake contained concrete; far more likely, it was a vegan blend heavy on cashew butter.

And your evidence for that is what, Alexander? Oh, and one wonders what Nazaryan's reaction would be to having a milkshake, even one with a vegan blend heavy on cashew butter, tossed on him by a stranger.

Ngo was punched and kicked as well; he claims to have suffered a cerebral hemorrhage. The violence was obviously criminal. What goes unmentioned is that Ngo had a history of “embedding” with right-wing groups — including, according to persuasive allegations he has denied, the white supremacist outfit Patriot Prayer — that provoke antifa into the very fights Ngo then films. In Unmasked, he eagerly dons the martyr’s vestments, describing the attack with such self-serving detail, you’d think he’d been liberating Rome.

So he had it coming? Nazaryan argued:

The truth about antifa has been chronicled elsewhere, and it is a lot more quotidian than Ngo and his abettors at Fox News would like you to believe. The nation’s top mainstream antifa scholar, Mark Bray, wrote in The Washington Post that antifa is “not an organization. Rather, it is a politics of revolutionary opposition to the far right.”

...Maligning the opposition was central to the Nazi strategy, and it is critical to today’s far-right extremists. Ngo’s intention here seems not just to discredit antifa, but to run a diversionary tactic for Patriot Prayer and other groups that are far more dangerous than their leftist counterparts.

The only thing about Antifa that seemed to bother Nazaryan was that they accidentally promoted Ngo's book by protesting against it being sold:

If trolling, not reportage, is Ngo’s purpose, then Unmasked is a tour de force. The left helped his cause (as it tends to), protesting in front of the famed Powell’s bookstore in Portland, Ore., for agreeing to carry the book. Powell’s backed down, giving Ngo the kind of publicity not even a Trump tweet would have brought. The book became an Amazon bestseller.

Ironically, the reaction to Nazaryan's poison pen review (another apology coming?) might do even more to help the sales of Ngo's Unmasked.