The New York Times co-authors of the book, The Education of Brett Kavanaugh: An Investigation made a stunning revelation to Lawrence O'Donnell on MSNBC on Monday. Robin Pogrebin and Kate Kelly revealed that their essay included the all important admission by the supposed victim that she did not remember the incident in question and that information was removed by the Times editors.

Here are the admissions by the co-authors which has caused many to  brand the New York Times article as Fake News:

LAWRENCE O'DONNELL: In your draft of the article, did it include those words that have since been added to the article?

KATE KELLY: It did.

ROBIN POGREBIN: It did.

O’DONNELL: So somewhere in the editing process, those words were there?

POGREBIN: Yeah. I think what happened actually was that we had her name, and ‘The Times” doesn’t usually include the name of the victim. And so I think in this case the editors felt like maybe it was probably better to remove it. In removing her name, they removed the other reference to the fact that she didn’t remember it. 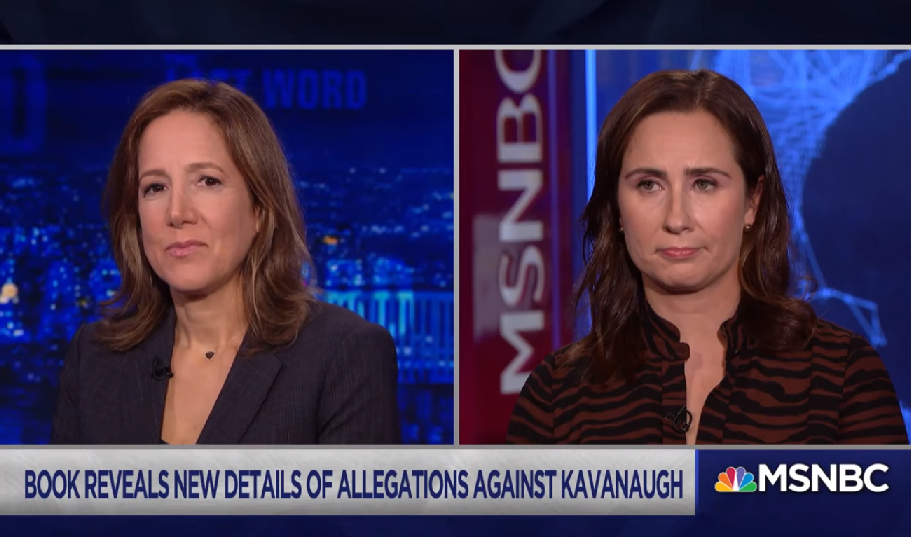 O’DONNELL: Okay. So in your draft for the Times, you used basically the exact words that are in the book, that ‘I deliberately left off the name because that passage begins with the name.’

O’DONNELL: And so in their removal of the name, they ended up removing the...

POGREBIN: The whole sentence, yeah. So I think it was just an editing — done in haste in the editing process, as you know, for closing the section.

O’DONNELL: Were you involved in the decision to amend this and do the addition online to the piece?

POGREBIN: We discussed it. There was so much heat, you know, everyone has been kind of seizing on various aspects of this that we certainly didn’t want this to be an issue anymore and he we certainly never intended to mislead in any way. We wanted to give as full a story as possible.

Of course, the update didn't actually happen until after others, notably Mollie Hemingway of the Federalist, pointed out that in their book the supposed victim stated that she did not remember the incident.