New York Times on Roaring Trump Economy: Change How It Is Measured

Perhaps some of you might remember a familiar scene while playing poker during your teen years. Very 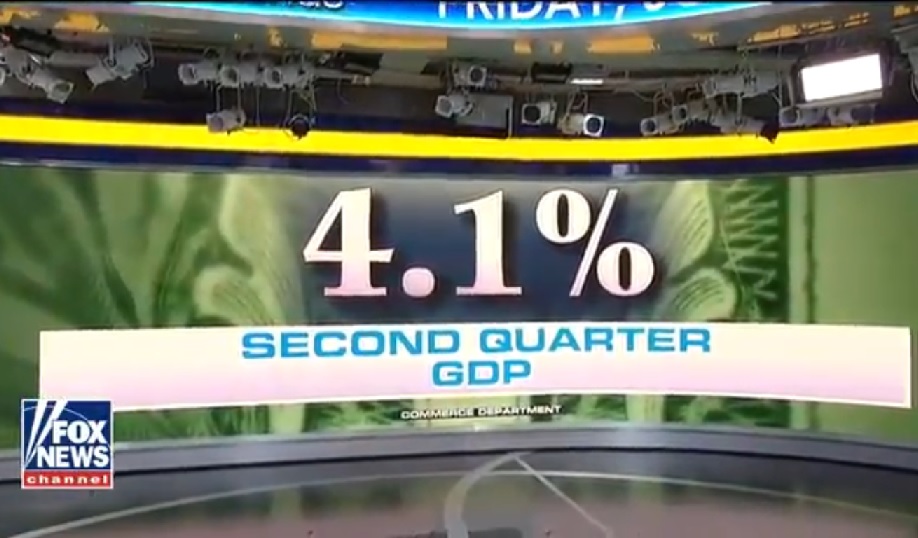 frequently someone who was upset at how the game was doing would yell out "DEUCES WILD!" to change the rules. It was especially suspicious if the person had just been dealt a new hand before yelling out that rule change.

Well, New York Times op-ed columnist David Leonhardt is essentially yelling out "DEUCES WILD!"  Now that the economy is soaring under President Donald Trump he wants to change the rules on how it is measured as you can see in his September 14 column, "We’re Measuring the Economy All Wrong."

Over the course of history, financial crises — and the long downturns that follow — have reordered American society in all sorts of ways. One of those ways happens to involve the statistics that the government collects. Crises have often highlighted the need for new measures of human well-being.

Yes, let us now develop new measures of economic growth in the wake of the latest quarterly Gross Domestic Product report of 4.2% under President Donald Trump. Very interesting timing on your sudden desire for a rules change, David.

The unemployment rate was invented in the 1870s in response to concerns about mass joblessness after the Panic of 1873. The government’s measure of national output, now called G.D.P., began during the Great Depression. Senator Robert La Follette, the progressive hero from Wisconsin, introduced the resolution that later led to the measurement of G.D.P., and the great economist Simon Kuznets, later a Nobel laureate, oversaw the first version.

Almost a century later, it is time for a new set of statistics. It’s time for measures that do a better job of capturing the realities of modern American life.

As a technical matter, the current batch of official numbers are perfectly accurate. They also describe some real and important aspects of the American economy. The trouble is that a handful of statistics dominate the public conversation about the economy despite the fact that they provide a misleading portrait of people’s lives. Even worse, the statistics have become more misleading over time.

Let's be honest, David. The real trouble for you is that those official numbers which you admit to be "perfectly accurate" show that the economy under President Trump is booming.

All the while, the federal government and much of the news media continue to act as if the same economic measures that made sense decades ago still make sense today. Habit comes before accuracy.

Fortunately, there is a nascent movement to change that. A team of academic economists — Gabriel Zucman, Emmanuel Saez and Thomas Piketty (the best-selling author on inequality) — has begun publishing a version of G.D.P. that separates out the share of national income flowing to rich, middle class and poor. For now, its data is published with a lag; the most recent available year is 2014. But the work is starting to receive attention from other academics and policy experts.

Yeah, since the current statistics are reflecting how well the economy is doing under Trump, lets change all that in favor of using a GDP version developed by a group of neo-Marxist economists.

In the Senate, two Democratic senators, including Chuck Schumer, the party leader, have introduced a bill that would direct the federal government to publish a version of the same data series. Heather Boushey, who runs the Washington Center for Equitable Growth, told me that it could be the most important change in economic data collection in decades.

Hurry! Hurry! Make the change before the next "perfectly accurate" GDP number is released on October 26, just 11 days before the midterm elections.

And there is no reason that data reform needs to be limited to G.D.P. The Labor Department could change the monthly jobs report to give more attention to other unemployment numbers. It could also provide more data on wages, rather than only broad averages. The Federal Reserve, for its part, could publish quarterly estimates of household wealth by economic class.

The current stats showing historic lows in unemployment stats for African-Americans and Hispanics in the U.S.A. must be very painful for Leonhardt to behold so he now wants a whole new way to measure those stats.

The whole point of statistics is to describe reality. When a statistic no longer does so, it’s time to find a new one — not to come up with a convoluted rationale that tries to twist reality to fit the statistic.

And when a statistic no longer reflects liberal fantasy, time to find a new one that twists reality to the desired result.