The Chasing Hillary book by New York Times reporter Amy Chozick was released Tuesday and some really interesting tidbits from the Hillary Clinton 2016 campaign trail have already been revealed. One such tidbit that appeared in the UK Weekly is that Hillary went on an F-word tirade during a mock debate against a mock Donald Trump: 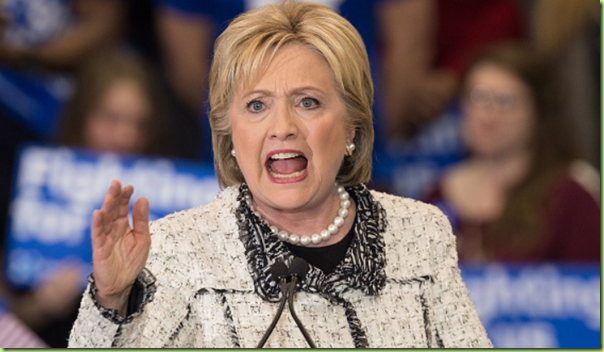 Hillary Clinton launched into a “f***-laced fusillade” during a practice session for her televised debate with Donald Trump in the run-up to the 2016 election, according to a journalist who followed her 2016 presidential bid.

In her new book, Chasing Hillary, New York Times journalist Amy Chozick, who covered Clinton’s political career for a decade, sheds light on the inner workings of a campaign which ended in shocking defeat.

In one passage, she describes a practice debate in which Clinton reportedly cried “You want authentic, here it is!”, followed by “a f***-laced fusillade about what a ‘disgusting’ human being Trump was and how he didn’t deserve to even be in the arena”.

Trump was played in the mock debates by longtime Clinton aide Philippe Reines, the New York Times reported at the time. Reines was chosen for the part due to his familiarity with Clinton’s “personal and political vulnerabilities”, enabling him to “throw any number of embarrassing comments in her face” as he imitated her outspoken Republican rival.

The UK Guardian also reported another revelation from the book that Hillary campaign manager Robby Mook was so weary of listening to Bill Clinton's unwanted campaign advice that he mocked him behind his back.

Campaign manager Robby Mook, who was 36 years old on election night, “always listened patiently, respectfully” to the two-term president talk about campaign strategy, Chozick writes. “But [Mook] mostly saw in the former president a relic, a brilliant tactician of a bygone era.

“Behind his back, Robby did a Bill impersonation (‘And let me tell you another thing about the white working class …’) waving a finger in a Clintonian motion.”

....“By late February,” she writes, “Bill went red in the face on almost daily conference calls trying to warn Brooklyn that Trump had a shrewd understanding of the angst that so many voters – his voters, the white working class whom Clinton brought back to the Democratic party in 1992 – were feeling.”

Finally, another Chasing Hillary excerpt that appeared in Vanity Fair about Hillary's reaction to merely tying with Bernie Sanders during the 2016 Iowa caucus gives new meaning to the expression "put on a happy face."

Hillary arrived at her victory rally at Drake University a couple of hours late wearing red. I stood on a folding chair in the back of the room and marveled at how good the entire Clinton family had become at smothering any honest emotional reaction. With Bill and Chelsea Clinton standing onstage behind her, Hillary drew into some deep reserve of fakery and willed herself into looking happy, as if trying hard enough would make it so. I remembered the advice Huma had given to a sobbing Anthony Weiner staffer after the Carlos Danger sexting scandal enveloped her husband’s mayoral bid, as famously captured in the documentary Weiner. “I assume the photographers are still outside, so you will look happy?” Huma said, rhetorically.

....As we rolled up our power cords and trudged through the parking lot to the bus with our open laptops cradled in our arms, the traveling press corps looked aghast.

Chasing Hillary also has a special three-page section listing 84 possible slogans that the Clinton campaign considered but ultimately rejected. Perhaps they were discarded due to overwhelming banality such as "You've earned a fair chance," "A new bargain we can count on," and "No quit."