Not all liberal media outlets are giving favorable coverage to former FBI Director James Comey's new book, A Higher Loyalty. One such media source is Vox which reminds its readers about why most liberals were clamoring for Comey to be fired...right up to the moment when President Donald Trump actually did fire him.

The reason for Vox writer Matthew Yglesias's ire towards Comey in his April 13 article is that Comey admitted in his book that he believed the polls that predicted Hillary Clinton was certain to win the 2016 election so he figured his re-opening of the probe into her email shortly before the election would have no effect on the outcome. Yglesias also admitted that he also believed Hillary was certain to win and provided a link to his November 7, 2016 article a day before the election that in retrospect is quite funny to read.

An upset Yglesias reveals the "damning admission" in James Comey admits that his read of the polls may have influenced his handling of the Clinton email probe: 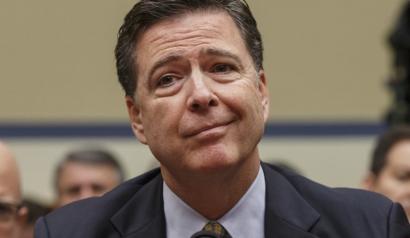 In his new book A Higher Loyalty, former FBI Director James Comey admits what most observers had inferred — that the overwhelming conventional wisdom that Hillary Clinton was going to win on Election Day played a role in his fateful decision to refocus the campaign on the email matter in late October.

“It is entirely possible,” Comey writes, “that because I was making decisions in an environment where Hillary Clinton was sure to be the next president, my concern about making her an illegitimate president by concealing the restarted investigation bore greater weight than it would have if the election appeared closer or if Donald Trump were ahead in all polls. But I don’t know.”

So Comey bought into the premise the MSM was blaring 24/7 before Election Day 2016: that the election of Hillary Clinton was a sure thing.

Yglesias then admits that extreme hubris before the election led almost all liberals to believe that Hillary's election was a slam dunk. And for our entertainment he even provided a link to his own hubris on November 7, 2016, a day before the election:

This is, obviously, a mistake that a lot of people made. Many polling-based models of the election showed Clinton with an overwhelming — 90 percent or greater — chance of winning. The main exception was Nate Silver’s 538 which showed her with “only” a 65 percent chance of winning.

And even some of us who weighed the debate and decided Silver’s statistical modeling was superior talked ourselves into the idea that he was wrong anyway due to Barack Obama’s high approval rating.

Thank you, Matthew for providing us the opportunity to laugh at your 2016 hubris:

The truth, however, is that by almost all accounts Hillary Clinton is leading in the polls and has been leading for essentially the entire campaign. That’s why all major election forecasters say that she is more likely than not to win. So the search for doubt has settled on Nate Silver’s forecast, an outlier among poll aggregators, that pegs Clinton as “only” a 65 percent favorite rather than the 85 percent or more she is favored by in other systems.

But even if you buy Silver’s main modeling assumptions (and I largely do), there’s considerable evidence outside the realm of things captured by poll aggregators that leads me to believe that if the polls are wrong, they are more likely to be underestimating Clinton’s support than overstating it. Predicting the future is difficult. And if you are terrified by the prospect of a Trump presidency, even a 10 percent chance he’ll win is pretty scary.

So feel free to stay nervous. But if someone offers you 2-1 odds on an election bet, you should probably take the Clinton side of the wager.

So how did your wagers work out that year, Matt?

And now Yglesias is mad that Comey bought into premise that he and most of the rest of the liberal media was promoting back in 2016:

Regardless, this is obviously not an appropriate criteria for an FBI director to be using when making crucial decisions.

So maybe you should have kept your mouth shut back then, Matt.