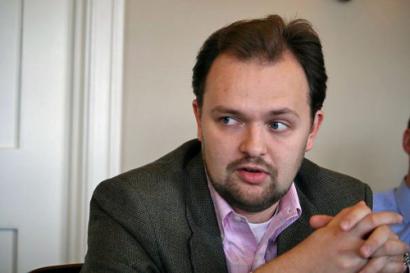 Ross Douthat, the "conservative" David Brooks mini-me at the New York Times, wants President Donald Trump removed from office pronto. Although Douthat admits in his May 16 column that Trump has probably not done anything actually impeachable, he still wants him out of office because his supposed "childishness" offends him.

The presidency is not just another office. It has become, for good reasons and bad ones, a seat of semi-monarchical political power, a fixed place on which unimaginable pressures are daily brought to bear, and the final stopping point for decisions that can lead very swiftly to life or death for people the world over.

One does not need to be a Marvel superhero or Nietzschean Übermensch to rise to this responsibility. But one needs some basic attributes: a reasonable level of intellectual curiosity, a certain seriousness of purpose, a basic level of managerial competence, a decent attention span, a functional moral compass, a measure of restraint and self-control. And if a president is deficient in one or more of them, you can be sure it will be exposed.

Trump is seemingly deficient in them all. Some he perhaps never had, others have presumably atrophied with age. He certainly has political talent — charisma, a raw cunning, an instinct for the jugular, a form of the common touch, a certain creativity that normal politicians lack. He would not have been elected without these qualities. But they are not enough, they cannot fill the void where other, very normal human gifts should be.

Yeah, let us all just forget that Trump was democratically elected president a few months ago. Somehow he must be stopped from continuing to offend poor Ross who now makes the case for removal from office due to terminal childishness by citing the mighty mentor of the mini-me:

There is, as my colleague David Brooks wrote Tuesday, a basic childishness to the man who now occupies the presidency. That is the simplest way of understanding what has come tumbling into light in the last few days: The presidency now has kinglike qualities, and we have a child upon the throne.

Here is David Brooks making the case, which his mini-me faithfully echoes the next day, that Trump is unfit for office because he suffers from incurable childishness:

At base, Trump is an infantalist. There are three tasks that most mature adults have sort of figured out by the time they hit 25. Trump has mastered none of them. Immaturity is becoming the dominant note of his presidency, lack of self-control his leitmotif.

First, most adults have learned to sit still. But mentally, Trump is still a 7-year-old boy who is bouncing around the classroom. Trump’s answers in these interviews are not very long — 200 words at the high end — but he will typically flit through four or five topics before ending up with how unfair the press is to him.

...Second, most people of drinking age have achieved some accurate sense of themselves, some internal criteria to measure their own merits and demerits. But Trump seems to need perpetual outside approval to stabilize his sense of self, so he is perpetually desperate for approval, telling heroic fabulist tales about himself.

Speaking of an accurate sense of yourself, David, how much of that sense came into play when you recently published a much mocked wedding registry chock full of kitchen utensils. If you had an accurate sense of yourself you would have realized how laughably tacky it is for a millionaire to publish a wedding registry filled with household knick-knacks instead of perhaps informing your wedding guests that in lieu of gifts you could easily afford, a donation could be made to your favorite charity.

Third, by adulthood most people can perceive how others are thinking. For example, they learn subtle arts such as false modesty so they won’t be perceived as obnoxious.

Yeah, God forbid that anybody be as shallow and obnoxious as you were when bragging about following Bruce Springsteen concerts around Europe:

They say you’ve never really seen a Bruce Springsteen concert until you’ve seen one in Europe, so some friends and I threw financial sanity to the winds and went to follow him around Spain and France. In Madrid, for example, we were rewarded with a show that lasted 3 hours and 48 minutes, possibly the longest Springsteen concert on record and one of the best. But what really fascinated me were the crowds.

We now return to Douthat, who childishly continues to make the case for 25th Amendment removal due to perceived childishness while admitting there are probably no impeachable offenses to be found. "A child cannot be president. I love my children; they cannot have the nuclear codes."

You mean the same nuclear codes that Bill Clinton lost when he was president?

But a child also cannot really commit “high crimes and misdemeanors” in any usual meaning of the term. There will be more talk of impeachment now, more talk of a special prosecutor for the Russia business; well and good. But ultimately I do not believe that our president sufficiently understands the nature of the office that he holds, the nature of the legal constraints that are supposed to bind him, perhaps even the nature of normal human interactions, to be guilty of obstruction of justice in the Nixonian or even Clintonian sense of the phrase. I do not believe he is really capable of the behind-the-scenes conspiring that the darker Russia theories envision. And it is hard to betray an oath of office whose obligations you evince no sign of really understanding or respecting.

So Trump hasn't done anything impeachable but because Douthat thinks he is childish, he still must go. BTW, speaking of childish, shouldn't Lyndon B. Johnson have been removed from office for committing childish acts such as sitting naked on the toilet while talking to Hubert Humphrey or Secretary of Defense Robert Strange McNamara in order to humiliate them?  And I won't even get into what Johnson did in his Senate office sink. For that you need to read Robert Caro.

And now we come to Douthat's incredibly childish fantasy that Vice-President Pence and the majority of Trump's cabinet would ever vote to remove him from office followed by confirmation by two-thirds of Congress:

Which is not an argument for allowing him to occupy that office. It is an argument, instead, for using a constitutional mechanism more appropriate to this strange situation than impeachment: the 25th Amendment to the Constitution, which allows for the removal of the president if the vice president and a majority of the cabinet informs the Congress that he is “unable to discharge the powers and duties of his office” and (should the president contest his own removal) a two-thirds vote by Congress confirms the cabinet’s judgment.

Hmmmm... The chance of this actually happening is somewhere between nil and none. Perhaps they could be persuaded as a humanitarian gesture if they are made to realize how uncomfortable President Trump makes the so very sensitive Ross Douthat feel.

And now for the Drama Queen finale:

"Now is a day for redemption. Now is an acceptable time."

Now is the time for mini-me & co. to get a reality check.