On her Monday afternoon MSNBC program, Andrea Mitchell brought on RNC chairman Reince Priebus and beat him over the head on his party’s supposed need to sign on to a generous immigration reform which sets millions of illegal immigrants on the proverbial path to citizenship. Feigning concern for the GOP, Mitchell set up the interview by asking her audience a rhetorical question: “[D]oesn’t the Republican Party need to do something about immigration just for its own future?”

With an introduction like that, it was no surprise what came next. When Priebus appeared onscreen, Mitchell immediately pressed him on the matter, asking:

Is it important for the party to take some kind of action to vote something on immigration... to have something come out of Congress for this midterm election?

Of course, it’s difficult for the GOP to move on immigration reform when President Obama refuses to uniformly enforce our current immigration laws, choosing to deport some illegal immigrants but not others. His use of executive orders in this matter should give congressional Republicans pause: even if they are able to pass a law they are comfortable with, the president may unilaterally change or ignore certain parts of it, much as he's done with his signature accomplishment, the ObamaCare health insurance overhaul. 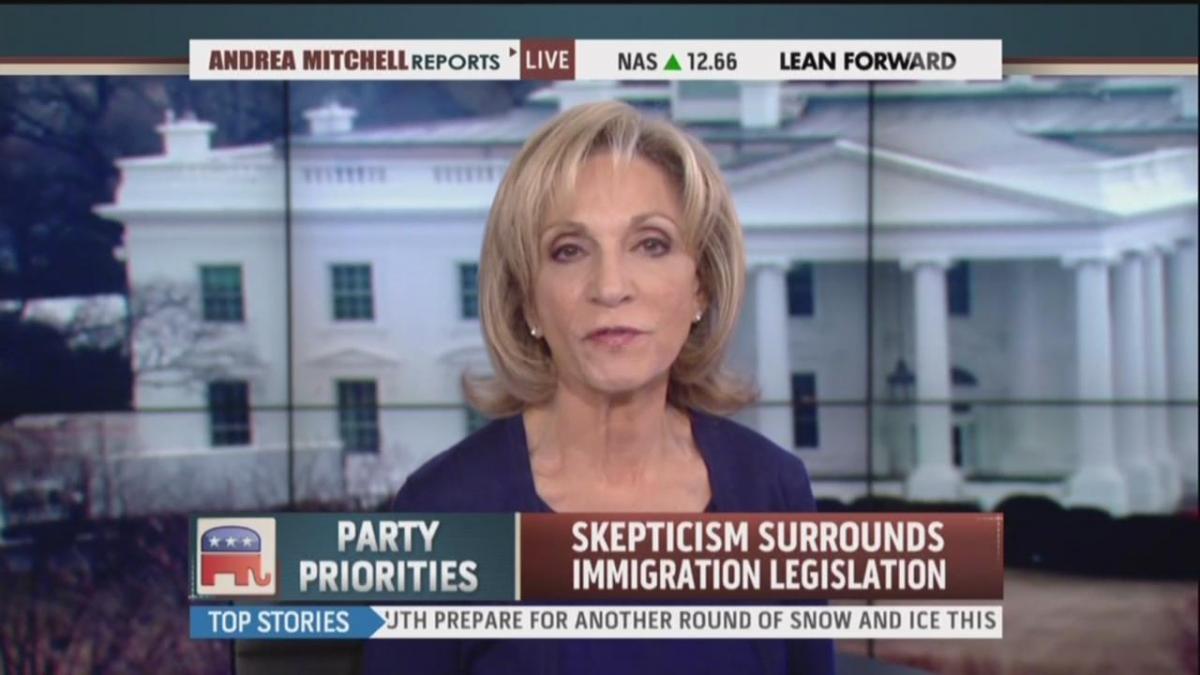 Later in the interview, Mitchell turned to the topic of Hillary Clinton. She brought up Sen. Rand Paul’s contention that Bill Clinton’s sexual indiscretions and subsequent impeachment should count as a strike against Hillary should she run for president. Mitchell huffed, “Is that a legitimate issue, rehashing the '90s, if Hillary Clinton becomes a candidate for president?”

Mitchell would probably love it if everybody simply gave Hillary a free pass on the 1990s, the era of Whitewater and Monica Lewinsky. But if the media called out Mitt Romney in 2012 for alleged misdeeds as a high school student in the 1960s, they need to scrutinize Mrs. Clinton for her actions as an adult in the 1990s. What's more, the Clinton impeachment drama was an instance where the entire party circled the wagons for a man who sexually exploited an impressionable young woman under his employ. To throw this sordid history back in the face of the Democrats and MSNBC -- who allege it's Republicans engaged in a "war on women" -- is fair game.

Mitchell actually seemed to be upset by the recent publication of excerpts from the diary of Diane Blair, a Hillary Clinton confidante. She asked Priebus in an accusatory manner:

Do you know, to your knowledge, did anyone in the Republican Party or Republican organizations that you're aware of, are they at all responsible for the timing of this or for the opposition research in going through Diane Blair's documents and posting them now?

It’s as if Mitchell thinks opposing Mrs. Clinton isn’t fair game. Revelations like this are a normal part of the no-holds-barred vetting process for someone who aspires to the presidency. Though the media may wish otherwise, Mrs. Clinton is not invincible, nor is she or should she be beyond heightened scrutiny.

Below is a transcript of the interview:

ANDREA MITCHELL: So is there a compromise afoot on immigration? Well, Speaker Boehner's office today already called Schumer's proposal impractical. But doesn’t the Republican Party need to do something about immigration just for its own future? Republican National Chairman Reince Priebus joins me now. Welcome, Mr. Chairman. Thank you very much for being with us.

MITCHELL: I wanted to talk about immigration. You know the demographics as well as anyone. Is it important for the party to take some kind of action to vote something on immigration –  I know the House voted –  to have something come out of Congress for this midterm election?

PRIEBUS: Well, I mean, there’s no question about it. One thing I do agree with Senator Schumer about is that illegal immigration hurts the American worker and I think we all agree that the immigration system itself is pretty broken. But you know, unfortunately, I think that in the divided government that we've got, and you've got two sides with different ideas of how to move forward, obviously it's difficult. And you've got a president that isn't enforcing the laws. I disagree that you just can't take one particular measurement and extrapolate that across the board. I mean, we've had a promise on border security since 2006, and nothing's been done. We've got an e-verify system that isn't working. And so, look, as party chairman, I will tell you, Andrea, what we need to do as a party -- now, you're talking about policy and legislation and that happens across the street. But as a party, one of the things that we're focusing in on is that we need to be in communities on a year-round basis, in Hispanic communities, African-american communities, Asian communities, on a year-round basis. And so what's happened in at the national party, for us, for me, our own criticism here is that we have become a party that shows up about once every four years, five months before the election. That's something that we are fundamentally changed at the Republican Party. And I think you're going to see great dividends of that both in 2014, but even more importantly as we get into the 2016 presidential cycle, which it comes to roost during that presidential year more often than the midterm.


MITCHELL: You know, the speaker said that they were interested. He sent all sorts of signals they were interested in doing something piecemeal on immigration. Then he backed off after the caucus or the conference, the retreat with House caucus members after Heritage and others weighed in very, very heavily. So was he forced to back down, or is this a head feint and he's trying to reassure the base, perhaps get past the filing deadlines for his caucus members so that they don't get Tea Party challenges and then revisit this with the White House later on?

PRIEBUS: You know, and I didn't -- honestly, I didn't see it in that same way, Andrea. What I understood was that the speaker and the members of the Republican Congressional caucus were going to get together. That document was a starting document that all the members were going to go during the weekend, revise the document, edit the document. You know, look. I know it's a topic of conversation that still exists today. I know that members are still talking about immigration. Rand Paul was just in Texas over the weekend and a few days ago talking about immigration reform. This isn't going away. It's just that at the current -- with the current state of affairs politically, obviously we're at a bit of an impasse. But it doesn't mean the conversation of immigration reform is dead. It just means that at this very moment in time, no one's going to be ramming through pieces of major legislation right now. So I think that's what it means. But as a party, obviously we're focused in on the political side of the equation, which is the 2014 midterms which is very good for the Republican Party. And then growing our party and continuing to grow into the presidential year, which is an ongoing process for us.

MITCHELL: And speaking of Rand Paul, he has now three times made a point of Bill Clinton's impeachment and saying that that should be an issue, a legitimate issue against Hillary Clinton should she run, that Bill Clinton had, quote, “predatory behavior,” he said in one or two of these recent interviews. Is that a legitimate issue, rehashing the '90s, if Hillary Clinton becomes a candidate for president?

PRIEBUS: I think everything's on the table. I mean, I don't see how someone just gets a pass on anything. I mean, especially in today's politics. So I mean, I think we're going to have a truckload of opposition research on Hillary Clinton, and some things may be old, and some things might be new. But I think everything is at stake when you're talking about the leader of the free world and who we're going to give the keys to run the United States of America. So you know, look, I think everything's at play. I think character matters. I think policy matters. I think, you know, the way that somebody might operate as president matters. And so, you know, the American people are going to put a lot of pieces together. And obviously, we as Republicans are going to help put those pieces together. And so, you know, Hillary Clinton provides a lot of opportunity for us. But, you know, we're going to have our own campaign and our own candidates, and I'm worried about 2014 right now, so that's a ways away.

MITCHELL: And even though it's a ways away, we've had the Washington Free Beacon, which is a conservative website, posting some excerpts from Diane Blair, a Hillary Clinton confidante's diary and other of her documents. They've been public for four or five years at the University of Arkansas, but they're just coming out now. Do you know, to your knowledge, did anyone in the Republican Party or Republican organizations that you're aware of, are they at all responsible for the timing of this or for the opposition research in going through Diane Blair's documents and posting them now?

PRIEBUS: Well first of all, the answer to you is absolutely nothing that I know of for sure. But you know, but I think it's important. I mean, it illustrates that Hillary Clinton was for single payer for a long time. So look, I didn't read them. I will read them. I know the gist of it. I've read the articles. But obviously, I think, like I said earlier, Hillary Clinton will present many opposition research opportunities for us to set the record straight on what she believes and what her history is on a lot of topics.

MITCHELL: Reince Priebus, thank you very much. Thanks for being with us today.