On Wednesday, ABC News posted a story on its website that is sure to send chills of horror down the spines of women all across the northern Great Plains. The state of North Dakota only has one abortion clinic – and it may soon be forced to shut down if the state’s restrictive new abortion law goes into effect. (Read the full story here.)

The story, written by political reporter Chris Good, was a ridiculously one-sided plea for sympathy for North Dakota women who have to travel great distances to kill their unborn children. Good set the tone in the third paragraph:

For more than a decade, women have driven for hundreds of miles, sometimes up to eight hours, to visit the Red River Women's Clinic in downtown Fargo -- the lone abortion provider in North Dakota since 2001 -- then getting back in their cars after the procedure to drive home.

Wow. Hundreds of miles is a long way to travel to kill your unborn baby. These women must be dedicated. Good reinforced that point with a quote from the clinic’s director: 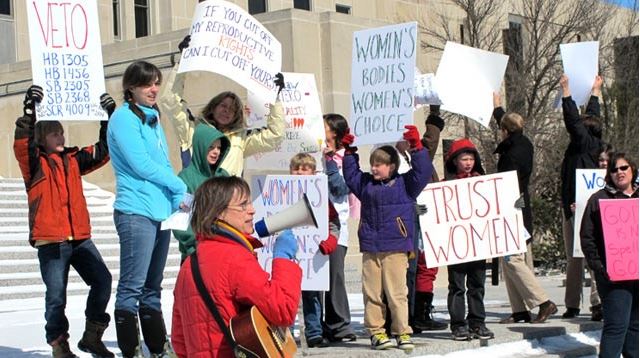 This sounds like it could be the plot of a compelling adventure movie. Who doesn’t love a tale of a determined soul overcoming obstacles on an epic journey to a coveted destination? It’s what made Homer’s Odyssey such an enduring piece of literature.

If the Red River Clinic closes its doors, the incredible journey will become even longer for women in western North Dakota, eastern Montana, and western South Dakota, according to the article. The closest abortion providers will be in Minneapolis; Sioux Falls, S.D.; and Billings, Montana. According to Good, this “would leave a stretch of more than 800 miles across the northern Great Plains without an abortion clinic.” Thus the title of the article, “No Abortions for 800 Miles.”

Good showed where he stands on the matter by applying labels arbitrarily. He included one quote from “anti-abortion activist” Mallory Quigley, a spokeswoman for the “anti-abortion group” Susan B. Anthony List. However, when mentioning the Center for Reproductive Rights, Good attached no labels whatsoever. Not “liberal,” nor “pro-abortion,” nor “anti-life.” Nothing. The message to the reader is clear: regular people support the right of a woman to have an abortion within convenient driving distance, while those who want to protect an innocent life are “anti-abortion activists.”